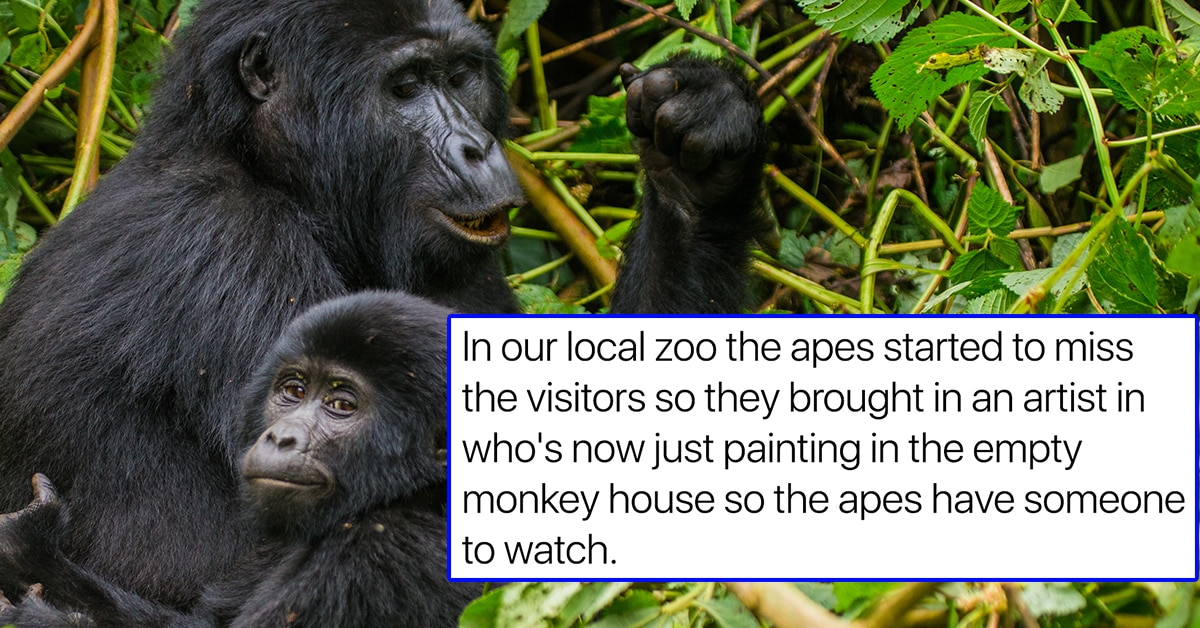 Zoos are incredibly lively places—there are kids laughing (and screaming), goats baa-ing, and ducks quacking. It’s usually a fun time—and the animals have learned to play it up for the visitors. But what happens when there are no visitors because zoos have been shut down? What happens to the animals? Do they become super lonely (we hope not; that’s heartbreaking)? Do they feel like they’re getting a goddamn break (we sure hope so)?

So, one Reddit user, formulawanker, asked his zookeeper Reddit compatriots what the animals are up to while there are no people around.

The answers were fascinating. For one, many zoos are keeping a watch on their animals’ stress levels due to changes in their environment, which is nice to hear. Second, some animals don’t give a flying f*ck (pun intended), while some definitely do.

Zookeepers of Reddit, how are the animals acting differently now that there are no visitors to the zoo? from r/AskReddit

“As a zookeeper coordinator, I’ve been working at the now-closed zoo almost every day for the past month. Animals that are free-roaming (peacocks, iguanas) are more active, and follow keepers around like they usually do with visitors. Most of the others don’t show much change in behavior. Although birds like swans and flamingoes are using the edges of their habitats more.”—Pyrocephalus-rubinus

“I haven’t found much change in pets or those animals that are being well taken care of. I have noticed that this has mostly affected stray animals whose only source of food was by eating all they found on the streets/parks. Since nobody is around, they don’t get food 🙁 I do my best by feeding like 10-12 stray dogs who come to eat at our farm. It makes my day watching them eat. 😙 Edit: Thanks for the suggestion to get them neutered. I’ll pass the suggestion to my parents.”—shampoo_and_dick

“Most of our animals are happy as long as we can keep their routines, feeding times etc. For some, they need a little extra. We do public encounters with our koalas, wombats and snakes among others so we spend an hour or so a day cuddling and handling these animals to keep them happy. A few of hour koalas really fret if they don’t get their cuddles. Otherwise, we just try to continue to spend time with animals that are expecting human interaction and of course we can take things for walks around the place like I’m sure you’ve seen at other zoos. Our wombats love a run and sniff, dingoes as well. “—sdooj

“You can check the live cam video feed and see for yourselves: San Diego Zoo Live Cams.” — Xanlthorpe

“I’m on day 25 of working at a closed zoo. I work with great apes, and their behavior has changed a bit. They are generally very interactive with the public, so they are seeking even more attention than usual from us. Some of them were suspicious at first of the overwhelming silence outside now. They were climbing up high and scanning the area looking for everyone.”—Erosenthal

“In our local zoo, the apes started to miss the visitors so they brought in an artist in who’s now just painting in the empty monkey house so the apes have someone to watch. EDIT: Woah this blew up overnight (Europe) they could tell they missed the visitors because they became very bored and are much more excited about the keepers than usual; apparently they watch the visitors as much as the other way around. The keepers now have to pay them more attention to and they also do stuff like hide food for them as a game Also: sorry for the confusion, I am not a Zookeeper myself but I live close by the zoo and it was in the local news and such.”—thegoldensnitch9

“Due to temporary staff cuts, they no longer have the people to regularly walk the wombats. Some of the wombats are holding the keepers personally responsible. Imagine having a 20kg chunk of muscle with big rodent teeth mad at you.”—cursedumbrella

“In the Magellan Strait, near the City of Punta Arenas, Chile, there is a colony of penguins. The place is called Magdalena Island. It hosts around 60k families, which range from 3 to 4 individuals. You have to take a two-hour ferry to the Island and then get an hour there, where you can choose between going to a lighthouse or stay within the trail and see penguins going about their penguin lives. They are cute and mischievous as f*ck. I worked as a guide there a couple of times and I’d see those little assholes biting tourist’s fingers and even stealing purses and whatnot. They’re awesome, I loved working those tours.”—ExpensiveRecover

“I work on an activity farm. There is a 22-year-old Shire horse. He acts like a dick when there are customers around. With no customers, he’s actually still a dick. That being said, he’s still awesome. Edit: I’ve been asked what he does when there are customers. Basically, if he sees any customer feeding any other animal in the large barn where he hangs out in the day, he will stare at them and stomp his front hoof on the ground. That guarantees they look at him. If they don’t immediately come over to feed him, he will start kicking the heavy metal bars that divide his area and the pen next door. This makes one hell of a noise. And he will keep it up, all whilst staring at the person with the food. If they feed him then he rewards them by slobbering all over their hands as he takes the food.

Also, at the end of the day, he is really good at telling the time. He knows when we close and what time he should be released from the barn and taken to the field/stables where he spends the night. If he isn’t let out bang on time he starts kicking the shit out of the gate at the back of his pen. This is a big metal gate and it sounds like someone playing a giant glockenspiel with a sledgehammer. He will keep this up until it is opened. Some customers are just scared to hand feed him. He is massive and his mouth is big enough to easily fit someone’s hand in. Some customers come up to me with their bag of food and ask me if I will feed him, because, “He keeps staring at me but I’m a bit too nervous to feed him.” I happily oblige. I love that ornery old bastard.”—nicklo2k

“My wife works at the gift shop for our zoo and the other day we had to go move some stuff around in the store because due to some heavy rains, it had flooded a bit. Of course we took a lap around the empty park (other than the keepers and few maintenance workers) and found that all the animals were really active and playful. A lot of them seemed really curious about us too. I’m sure they get used to seeing crowds every day and were starving for attention.”—Grandpas_Cheesebarn