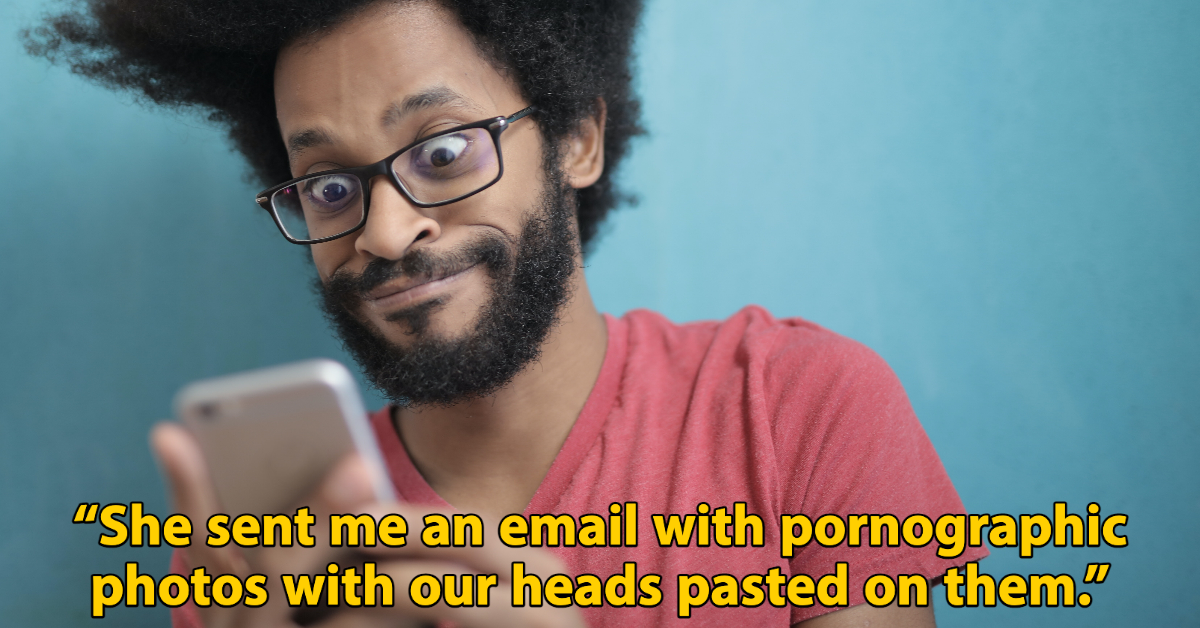 People aren’t always forthright when they have a crush on someone. Maybe they’re scared of rejection or shy or unsure of how the person will react. But often, revealing a crush can be a very awkward experience. On Reddit, people are sharing the strangest ways they found out someone had a crush on them — and either these stories end with a massive cringe or a very wholesome “yes, I like you too!” And sometimes — marriage and kids.

“She left her phone number on my car windshield randomly. My wife didn’t find it very amusing.” —

“She sent me an email with pornographic photos with our heads pasted on them. She had been an internet friend that I had no romantic interest in and never flirted with. She never flirted with me either so far as I could tell. We had talked for about 3 years, almost daily, but always platonic stuff. She was quite a bit older than me and while I never told her this I looked at her more like a fun Aunt. I got a girlfriend and when I told her she absolutely flipped out. Cussed me up one side and down the other. Told me I had broken her heart. On and on and on. I was stunned. I apologized and told her I had just seen us as friends and hadn’t meant to make her think it was anything more than that. That’s when the porn photos started showing up. And creepy ‘This could have been us’ messages. I blocked her on everything (which was like two things because this was 20 years ago). About a year ago I got curious and looked up her name. She ran for and won a small government position in her hometown about three years back. Found some newspaper articles and discovered a few things: She had been married for 30 years, she had claimed to be single when we talked. I had been 19 when we started talking. She had claimed to be 30. She had actually been 42. She had kids that are older than me.” —

“I briefly danced with a girl at a HS dance, before she told me 1 song was enough and went to the restroom. A few weeks later a mutual friend asked what I thought about her. I said that she was nice and cute, but she was obviously not into based on the dance. He told me to give it another shot. I asked her out later that day and we ended up dating for about a year.” —

“It was weird, I asked her out and she said she was a lesbian and I was ‘crushed’ but I respected it. Found out later from a mutual friend that she was lying, actually liked me too and she quote said ‘it wasn’t in the plan’ for me to ask her yet. The mutual friend essentially said, dodge that bullet, while you still have a chance.”

“I was giving him a ride home from a work function and he jokingly brought up that our boss had mentioned the policy on coworkers dating because we came to the event together but he thought he ‘didn’t have a chance in hell’ with me (his words!) so that policy didn’t matter…Well I also had a crush on him so it mattered very much lmfao. We’re married now.”

“She was a colleague who had heard I was leaving town (I wasn’t, only going to be away for 2 weeks) and she took her chance by kissing me after we bumped into each other at a nightclub (it was a rare night off work for me)…it’s now 16 years and 3 kids later…so it worked out well for the both for us!

“She called me and asked why I had never asked her out on a date. She knew I was interested because I had told some friends that I was and they had told her. The reason I hadn’t is because her brother and I were friends before I met her. When she called I told her I’d be thrilled to take her out but I wanted to make sure it was cool with her brother first. He was cool with it and we’ve been together 18 years now. Dating a friend’s sister could’ve turned out bad though tbh.” —

“I had to be told due to my inability to pick up on any sign/signal whatever. I had absolutely no idea that she liked me. Way too much risk when you read it wrong.” —

“I was on a skating rink and there were a couple of girls hanging out by the the benches and one of them screams to me as I roll by that the other one likes me, I didn’t react to it to save the girl any more embarrassment as she was practically hiding.” —

“Lol, I remember in middle school getting a note in my locker that only said ‘would you like to go out.’ I saw it and was very confused. Like weeks later this random guy from one of my classes came up to me and asked if I had an answer to his note. There was no name on the note, and looking back he must have been more nervous, but I barely knew him and and I just said, ‘No, sorry’ and kinda bowed my a head a little and walked away as quick as possible.”

“Temp who worked with my team (I was a team supervisor/manager in hospitality), who was kind of cute, cyan and magenta dyed hair, and was really into ‘Cry Core,’ and of course my first interaction was to give her the piss like the boys, would claim many nights at work I was flirting with her and I would always tell her I admired her confidence, but had zero interest since I was with my soon to be fiance at the time, and she was weird. Every night she worked with a different team, she would ask if I would be working with her and if I was even on property so we could talk, as told to me by the other team leadership. Turns out she had a massive crush on me, tried to track me down via social media but couldn’t find me since at the time I was using a nickname at work since I have a very common name, and I learned all this when seeing her recently at a music shop, ‘called me out’ for all that, in front of my now wife.” —

“We’d both had a crush on each other for 8 years, one day we were messaging and started sending random emojis, that then got sexual. She asked if we’re still joking…which is when we both realised we weren’t and that we should’ve started dating 8 years ago. So now we are.” —

“The worst one was a guy who wouldn’t take no for an answer. As far as I knew he was straight, so I sorta assumed it was a joke the first couple times. But he asked me out several more times and i just got more confused. I wasn’t really into him, and I kept assuming he was going to make it into a joke with his straight bros about how he got me to say yes. Then he got pissed off, saying he was going out on a limb by asking out a (slur redacted) and I should be grateful he would even consider me like that. Dude had some internal issues to sort, i think. Dodged a bullet there.” —

Years ago, I had a crush on someone. We worked together. I sent him a letter anonymously in the mail, expressing my feelings for him. He came to work and told me all about the letter, in fact he told everyone. Several months later I got up the courage to tell him I was the author of the letter and he asked me if he could kiss me? I was so scared, but Excited too!

“She told me straight at my face that she liked me. The whole class shipped us when they found out that the prettiest girl in the classroom liked one of the fat boys of the class. They all look at me when she talks to a boy.” —