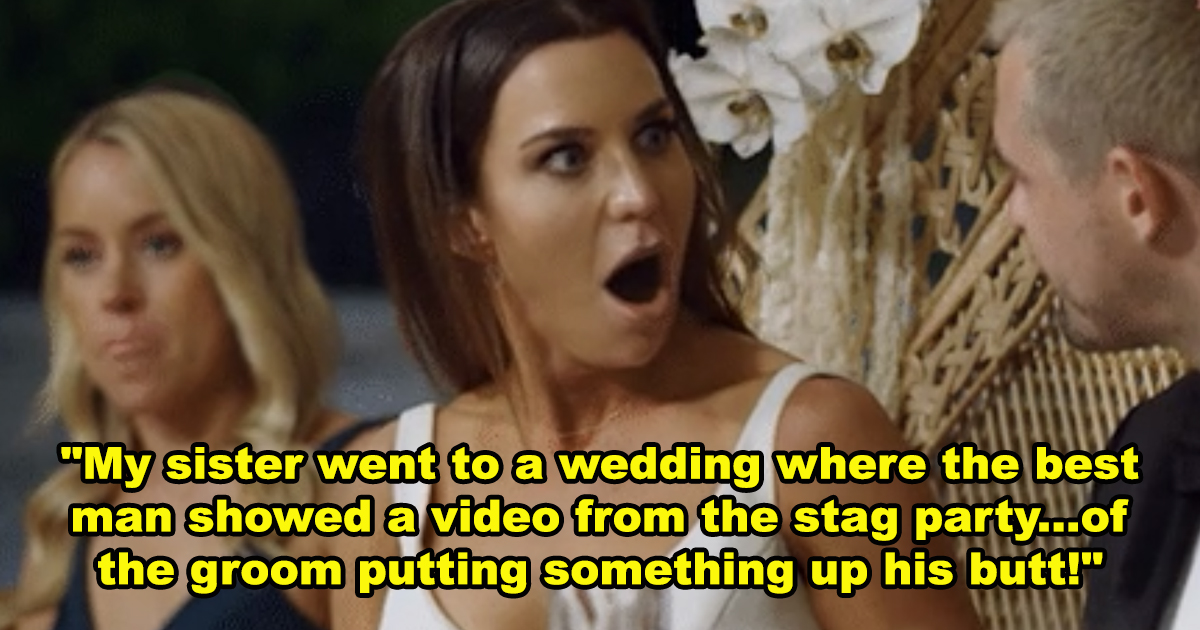 Over on BuzzFeed, readers chimed in with some of the absolute most grimace-inducing stories about weddings they’ve attended. Here are some of the best.

“I went to a Catholic church wedding where the bride’s stepmother wore an extremely low-cut dress with very large fake breasts on display. The bride’s biological mother got very drunk and proceeded to make a speech saying, ‘I’m the bride’s REAL mom.’ Then she pointed at her own chest and yelled, ‘And these are also real!’ You could have heard a pin drop.”

“My sister went to a wedding where the best man showed a video from the stag party…of the groom putting something up his butt!”

I was at a wedding reception where two actors came out onto the dance floor and performed a montage of ‘scenes’ from the couple’s relationship. They performed the night the couple first saw each other at a kebab spot, the day he introduced him to her parents, the time they had a fight on an airplane, right up to the day she was experiencing wedding jitters and he assured her they’d be together for life. It lasted for what felt like an hour!”

“I was at a wedding where the bride’s name was Fantie, and her ex-stepdad opened his speech by saying that her name rhymed with ‘panties.’ Then he just babbled on about how, when he first met her, she was in her panties, so they were ‘Fantie’s panties.’ This went on for about five minutes, during which he said the word ‘panties’ nearly a dozen more times before the mother of the bride finally got onstage and grabbed the microphone out of his hand.”

“I attended a super-Christian wedding where the bride and groom did a ‘first song’ instead of a first dance. It would have been lovely had the song of choice not been Katy Perry’s ‘Teenage Dream.’ Every time they got to the part of the chorus that says, ‘Let’s go all the way tonight,’ the bride’s voice got huskier and she did some sexy moves.”

“My niece’s husband came out in a Speedo at their reception. It was terribly awkward, but he thought it was hilarious!”

“I was at a wedding recently where the father of the groom spent a significant amount of his speech talking about how hot he thought the bride was! Everyone was cringing and looking at each other as if to ask, ‘Is this for real?!'”

“My 4-year-old daughter and I were bridesmaids for my sister-in-law’s wedding, and they had just begun saying the vows when my daughter — very loudly — announced, ‘Mummy, I need to poo!’ It echoed all the way through the church.”

“I went to my former coworker’s wedding, and the reception was held at a lovely, high-end reception hall with golden chandeliers and tuxedoed waitstaff. Yet by the third hour, at least two of the groomsmen were dancing around with only their boxers on. We didn’t stay to see if the rest would follow suit.”

“I was at a wedding where the very pious wedding party put on a puppet show basically demanding that people put money into a bird cage to fund the couple’s honeymoon! After an hour of the skit, the bride put her own $20 into the cage, hoping it would start things off. It didn’t.”

“When my brother and sister-in-law were engaged, they decided that the bride would keep her last name, since there were no males on her side. Well, my father is old-fashioned, so they never told him, and when the minister said, ‘I now pronounce you Mr. SS and Ms. IE,’ my dad stood up and yelled, ‘YOU FUCKING BITCH!’ and walked out of the church.”

“I was the only single person at my friend’s wedding of 300 people, and when it was time for her to throw the bouquet, it was just the two of us on the dance floor…while 298 people looked on. Yes, I caught the bouquet. No, I have not recovered from that experience.”

“At a wedding I attended, some of the guests went straight to the reception, so when the rest of us arrived, there were only crumbs left on the serving plates.”

“I went to a wedding where the Catholic priest seemed to have a big crush on the bride while he was officiating, going on and on about how wonderful she was. We were totally creeped out.”

“At my father’s second wedding, he toasted his bride by saying, ‘I love you like a fat kid loves cake.’ I cringed.”

“When I got married, my mom waited until the moment I was holding a glass of champagne and about to cut the cake to tell me I was supposed to do a toast. I had no idea, and it was the end of a very long night, so I said the first thing that came to my mind: ‘Uh, clink-clink, let’s drink!'”