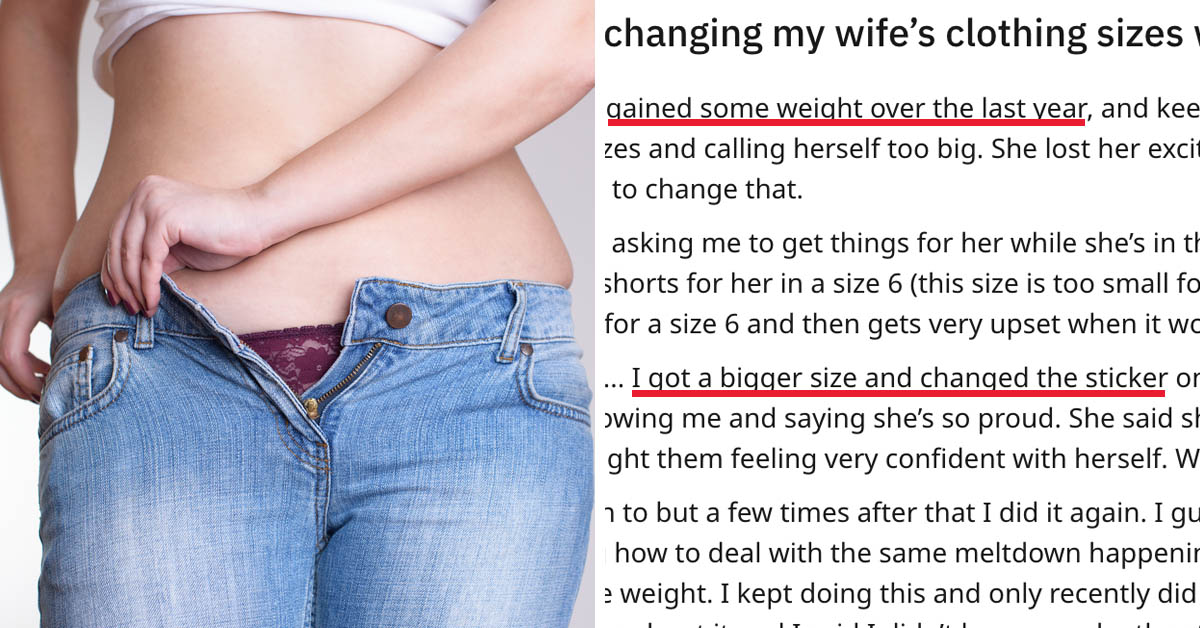 If the onslaught of shady Instagram influencers hawking even shadier diet teas is any indication, a lot of people aren’t happy with their weight. And it’s totally understandable, who doesn’t want to shed a few pounds?

But if you’re the spouse or significant other to someone struggling with a recent weight gain, things can get dicey. A lot of people are sensitive about their weight and seek reassurance from their SO. While there are plenty of things you can do to help your SO feel better about the way they look, tricking them like this dude did is not one of them.

Posting on Reddit’s r/AmITheAsshole, Reddit user lurkandsmirk29 started by laying out the very relatable issue his wife was having—gaining weight and not being happy about it—and his also relatable issue of having an unhappy partner and not knowing what to do.

“My wife has gained some weight over the last year, and keeps beating herself up over it. She’s always sadly talking about her sizes and calling herself too big. She lost her excitement with shopping and a few months ago I guess I made a step to change that.”

Then he got to the not-at-all relatable “solution” he came up with to deal with his wife’s unhappiness. He played a little switcheroo with the size tags on her clothing.

“She’s always asking me to get things for her while she’s in the dressing room, new sizes etc. She told me to get a pair of jean shorts for her in a size 6 (this size is too small for her now by a lot. She’s kind of in denial about this and always asks for a size 6 and then gets very upset when it won’t fit at all. She’s more of a size 10 or 12 now. )

I don’t know… I got a bigger size and changed the sticker on the jeans so it said size 6. When it fit she was so happy and kept showing me and saying she’s so proud. She said she must have lost weight but doesn’t know what she did. She bought them feeling very confident with herself. When we got home, I cut the tag off the shorts.”

Unfortunately, this guy’s little ruse wasn’t a one-time thing. He kept up the charade leading his wife to believe she had lost weight when she hadn’t. Eventually, he says, she found out.

“I didn’t mean to but a few times after that I did it again. I guess it was part wanting to see my wife happy and part not knowing how to deal with the same meltdown happening every time. She looks really beautiful even if she gained some weight. I kept doing this and only recently did she realize that the tags on her clothes are missing. She asked me about it and I said I didn’t know, maybe the store doesn’t use them, but she googled the store and proved they did.

I had to come clean and now she’s furious. She keeps saying I’m an asshole and treating her like an idiot, lied to her, stuff like that. My heart is broken too. We haven’t spoken in days.”

First of all, no one should lie to their spouse. Secondly, it seems like his dishonesty was less about making his wife happy and more about him avoiding her unhappiness, so his intentions weren’t pure (even if his actions made his wife feel better in the short term).

Finally, and not for nothing, but women’s clothing sizes vary quite a bit between retailers. It’s not a stretch (no pun intended) to imagine size 6 pants from one outlet fitting her and not from another.

Folks on Reddit all seemed to agree that this guy was, in fact, the assh*le, although many sympathized with his plight.

But hey, everyone makes mistakes and in the grand scheme of things he certainly could have done worse.