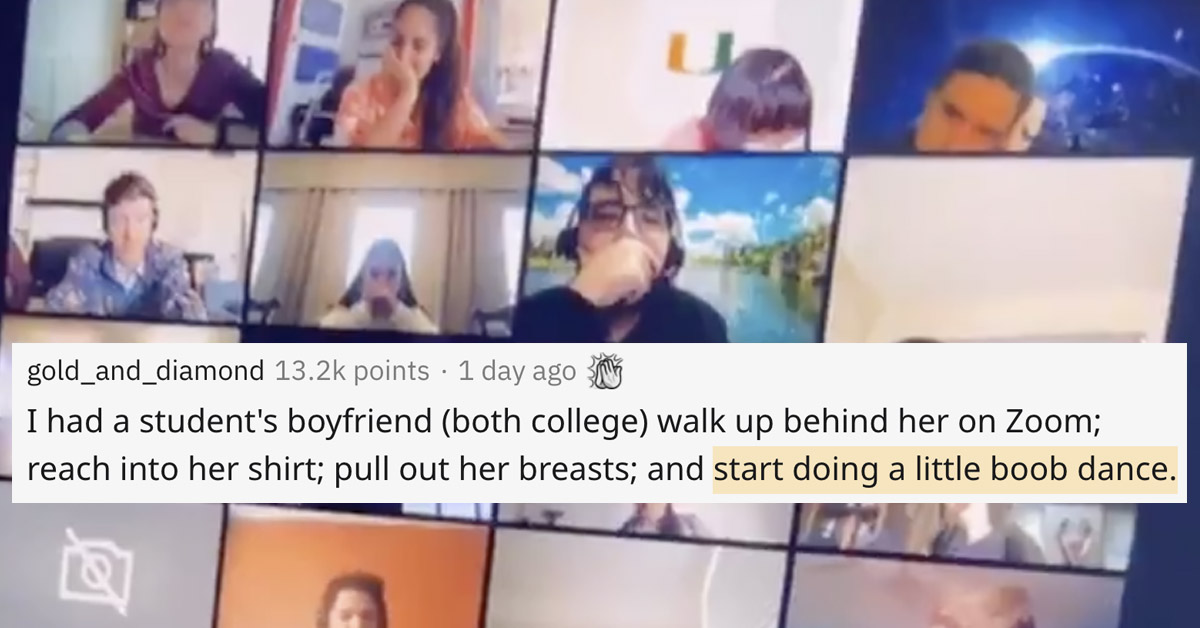 What an absolutely outrageous time to be alive. This year has been unrelenting with blow after blow of almost Apocolypse-level events.

The one thing that any person can find comfort in right now is that we’re all pretty much f–ked and the fact that this can be a comfort shows just how f–ked we really are. When such an unprecedented series of crises happen IRL, all we can do is attempt to adapt (or panic and crumble, either is acceptable right now).

2020 has proved to be the year of constantly adjusting and parents with multiple children are having an especially difficult time adjusting to this new version of school—remote learning.

Hats off to these humans who are facing the ultimate struggle of having to spend literally all day every day with your kids.

But the one thing we can do in this situation is laugh.

Redditor u/AsteroidPizza39 went there for us and asked the people of Reddit “Students/Teachers of Reddit, what’s the best ‘forgot to turn off the mic’ story during virtual learning?”

The results do not disappoint. Here are 20 of the best hilariously embarrassing virtual learning bungles.

During my English class, this one girl forgot to mute herself. While my teacher was talking, she almost deafened all of us on the Zoom call answering her mother’s questions.

Her mother (from a distance): “What class are you in?”

Her mother: Oh, the hot teacher?

Her: Yeah that guy

Now, even I’ll admit my teacher is fairly attractive, but it does take it to another level when you get your own mother involved. Thankfully, our teacher is a chill guy and thought the whole thing was just kind of funny, and kind of just gave a general reminder to the class to keep mics muted. She didn’t say anything for the rest of the class. –townie0114

Last week kid in my brothers class forgot his camera was on during the first class and was smoking a giant gas mask bong on his face during the syllabus review. –cmb62393

In a math class I was in, we were taking a test, which you have to turn your mic on for—their way of trying to prevent cheating. Some girl apparently forgot that hers was on and started belting out “Stand By You” by Rachel Platten at the top of her lungs. It went on for the entire song and she was still humming it when I finished the test and left the call. –vegancheezits

Ironically my IT teacher forgot to turn of his mic and camera and proceeded to get in a very heated argument on the phone with his ex-girlfriend who he has a kid with. Did I mention that she’s also a teacher at our school? Yeah most awkward 5 minutes of my life before he realized. –Odd_Camera_9588

I just did 8 hour zoom calls for 7 weeks training for a new project. On the second week, a man un-mutes his call, farts the longest fart I’ve ever heard in my life, then when he finishes, mutes the call. I can see others laughing while muted at his fatal error of thinking he wasn’t muted and so he went to “mute” his call.

I found this to be the highlight of the week, but the following week the guy does it again!!! Honestly the second time I laughed but then started to wonder if it was some kind of power move… –solo1024

Heard the clapping sound of a kid jerking off. His name lit up and everything. -ThiccnNuggets

Kid stopped in the middle of the class meeting and took his laptop to the bathroom with him. He sat on the toilet for the rest of the meeting. -toutcompris

I had to defend my thesis over Zoom and many professors came into the call to watch. My thesis was about immune response in fish to parasites. One professor joined late and forgot to mute her mic and we got treated to this little gem:

“Shhhh. Mommy is learning about fish parasites, which is what you’ll get if you don’t stop peeing in the koi pond.” –daemare

I had a student’s boyfriend (both college) walk up behind her on Zoom; reach into her shirt; pull out her breasts; and start doing a little boob dance. She was just laughing and playfully slapping his hands away.

This was probably 30 seconds after I had just gone through my whole speech of making sure there was nothing in your browser history, Google search history, or names of folders that could be embarrassing or offensive. –gold_and_diamond

So there was no live mic scenario, but one of the participants left his webcam on. During the presentation, he whips out a gigantic party sub and is just going to town on it. So while everyone is watching the presenter’s PowerPoint, you just see this guy (who I had met before and was a legit 6’8″) just scarfing down a party sub in a window in the bottom of the screen.

Honestly, it was more impressive than anything. –Liverpool510