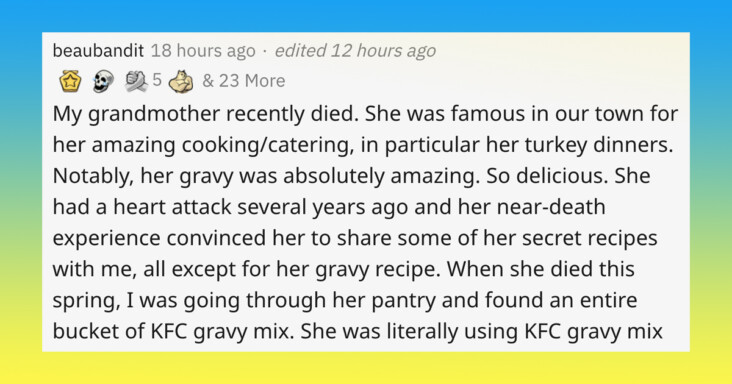 We don’t get to pick them and we don’t always like them but we’re all stuck with our own complicated little communities we call family. And like any group of people who are forced to be connected for years and years, there will be secrets.

The people of Reddit have been spilling the family beans after user u/AbsoluteHavoc asked the question:

“What family secret was finally spilled in your family?”

The responses are DRAMAAA and we’re so here for it.

Here are the top-rated family secrets spilled by the people of Reddit.

“My great great grandfather was exiled and banned from Missouri for being a sheep thief.” –ksromo

“When my mother fell ill and I took over her finances I found thousands of pounds of gambling debt on her credit cards. Then I found adoption papers for a child she’d had before me that she’d never mentioned. Then another family member told me my dad didn’t die in a car crash but committed suicide in prison.” –Cocobean4

“My grandmother recently died. She was famous in our town for her amazing cooking/catering, in particular her turkey dinners. Notably, her gravy was absolutely amazing. So delicious. She had a heart attack several years ago and her near-death experience convinced her to share some of her secret recipes with me, all except for her gravy recipe. When she died this spring, I was going through her pantry and found an entire bucket of KFC gravy mix. She was literally using KFC gravy mix as a base to make her incredible gravy. Huge scandal. –beaubandit

“My uncles are infamous criminals who killed multiple people. I thought they bred dogs.” –keavyseancy

“My great-grandma was Cherokee. Until I took a DNA test and have no Cherokee. A lot of the older relatives are mad about that one.” –digitalmofo

“We went to my grandmother’s for Christmas dinner like we did every year and my uncle drank too much, and kind of hinted that he had an affair with my mother. A couple of months and two dna tests later we found out my sister is actually his daughter. My dad never spoke to his brother again. And of course, my parents got divorced. And I needed a lot of therapy… and chocolate.” –oliveotherraindeer

“As a young teenager, my grandma shot her pedophile father in the back while he was sleeping. He had been molesting her and all her siblings. She ran away after being hidden by her brother for some time. Her father survived though. Thankfully my grandma never faced any legal consequences, but she was bat-shit crazy until the day she died. My aunt told me at her funeral because I asked why grandma was the way she was.” –hei4esnn

“That my grandfather was an atomic soldier. Instead of sending him to fight in the Korean war, they sent him to Nevada, where (after having him turn away from the initial flash) he witnessed the mushroom cloud. After that was over, he was ordered to march to the detonation point, where he was unwittingly exposed to high amounts of radiation. Luckily for my family, my grandpa is now in his 90s (even after a few cancer scares) and the rest of us (my mom, aunt, cousins, sister, and I) are cancer-free and fairly healthy, but this is medical information that we really should have known earlier!” –Lady_Seashell_Bikini

“When my sister was diagnosed with cancer and her survival chances were low, it inevitably came out that she wasn’t my sister… Parents must have felt we should all know the truth just in case. She survived her treatment, and will always be my sister.” –a_kid_a_91