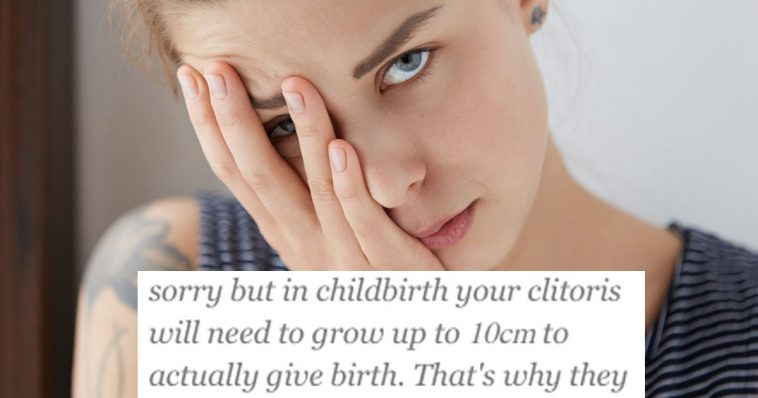 Sometimes, people are so stupid that it leaves us speechless. With Google being a swipe away – you can’t help but wonder how people go this long without knowing the answers to basic questions. (Ahem. Like, when people ask you what time something closes – but they’re perfectly capable of Googling it themselves?)

One Reddit user,_ahsatan, just proved that you can be a full-blown adult and not know a damn thing about the female body – even if you’re a female. She basically started an incredibly hilarious and also cringe-worthy thread with the fact that she had to teach her 26-year-old sister-in-law and her 31-year-old husband that you do not pee from your clit – go figure.

She then asked Reddit users to share the most “ridiculous ideas they’ve heard about the female body” and, they did not disappoint.

That if a woman cannot give birth through the birth canal the Dr will finagle things so the baby comes out the asshole. I thoroughly assured the guy who said this that this was impossible but he insisted that was how his grandmother gave birth.

That you can “hold” your period blood the same way you can hold your pee. I had an incredibly stupid boyfriend once that wouldn’t stop at a gas station on our way someplace because he thought I could just hold it til we got there.

ETA: that women only use one pad/tampon per period. That pads/tampons/etc aren’t necessary hygiene items.

This woman I used to work with once said that once she was pregnant she was no longer going to have sex with her husband, just blow-jobs. Why? Because she didn’t want to get pregnant with twins. -.-

That longer labia and loose vaginas are caused by more sexual partners, whereas married women who have sex often with the same person experience no change. (I’m aware that IRL neither of them experience a change because of sex or partner count)

My first boyfriend believed in that myth that states that when you start having sex with the same person, your vagina conforms to the shape of his penis, so if it feels different than usual to him, it means you fucked someone else. How does that even make any sense…

Years ago someone much older than me told me you could get AIDS from toilet seats when you’re on your period because your period is an “open wound”.

I’m so happy you asked. When I was in 8th grade, one of the girls I sat next to asked, “so, do girls get their period once they come to america?”

I spent the rest of the conversation trying to explain to her that women in EVERY country had periods… it’s not just an American thing.

I don’t know… I think the one about women’s bodies being able to shut down during sexual assault and prevent pregnancy is at the top of the list of absurd misinformation that I’ve ever heard. shudder.

When I was in school I had a bf that always looked at my chin. He stared at it and it started creeping me out, so I asked him what he was doing. He confessed that he didnt believe I was a virgin and was looking for the skin under my chin that you lose when you have sex. To this day I still dont understand what he was talking about.

Oh, my time to shine! I am an L&D nurse and I hear some weird shit, especially from teen moms.

“My friend told me that if I douched with sprite after having sex, I couldn’t get pregnant.” – 16 year old in labor

“I tried to schedule a c section because my pussy is really tight and I know a baby ain’t gonna fit through there. The doctor wouldn’t let me.” The baby did indeed fit with no assistance (meaning no vaccuum or forceps, a doctor was totally there haha).

5 foot tall 120 lb girl who looks so pregnant it’s like she swallowed a beach ball, hasn’t had her period in 9+ months, is sexually active, shows up to ER with abdominal pains (contractions!): “I didn’t know I was pregnant.”

“I’m not going to breastfeed because I am afraid it will turn me on too much. I like nipple play during sex.”

My boyfriend thought girls had to use bigger tampons after they’re no longer virgins. That’s why he thought there were different sizes; one for pre sex, one for post sex, and one for post baby birthing.

Shaving makes your hair grow back darker. Don’t shave your face or it will grow back worse and look like you have a mustache.

NO IT DOESN’T. STOP. STOP TELLING PEOPLE THIS. THAT IS NOT HOW HAIR WORKS.

In high school I had a friend who thought women laid a literal period egg. Like a chicken. We were 16 and he was not kidding.

Remember the guy on here who didn’t know what happened to water when women took baths or swam because they have vaginas? That one.

A guy I dated in high school thought girls had four holes. One to pee, the vagina, the baby hole, and the poop hole. He also thought women put home pregnancy tests up their baby hole to find out if they were pregnant.

At my last job, I had a woman who was over 50 and didn’t wear tampons because she didn’t want to have to change them every time she peed. She didn’t know that pee doesn’t come out of the vagina. This woman worked in the medical field. It blew my mind.

My Mom used to put a plaster over her belly button when pregnant and having a bath, because she thought the fetus would drowned yeh for Irish sex education circa 1950’s

That it is physically impossible for girls to urinate while standing. So I stood and pissed down my legs.