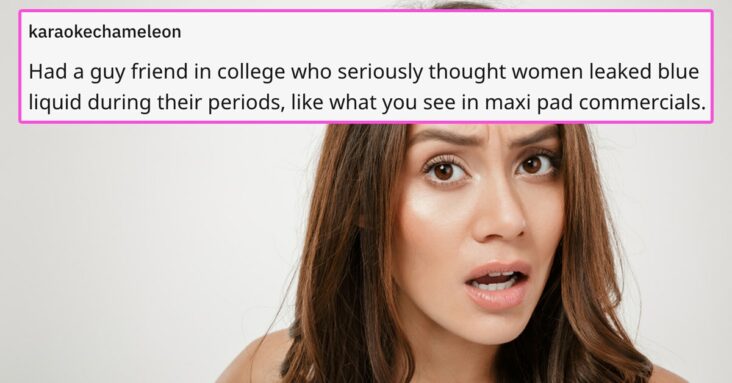 The men in our lives mean well (for the most part), but sometimes they’re just genuinely clueless about things, especially the female body.

And while it would be easy to blame them, the quality of sex education offered in schools could be the real issue here.

Even so, women have historically managed to figure things out faster than men. Women are more open to discussing these topics, and we’re also quicker to admit we don’t know, instead of assuming.

Unfortunately, the same can’t be said for the guys in these stories.

In a viral Reddit thread, women are chiming in to share “that’s not how women work” moments.

The answers are surprising and hilarious but also quite disappointing. It’s clear some of these men may need to consult Google or an anatomy textbook before sharing their thoughts on the female body.

That said, here are 20 of the best “that’s not how women work” moments from the women of Reddit.

The first guy I dated wanted to go swimming, but I told him no because I started my period and felt sore and crampy. He asked me if I could finish it before the end of the day so we could go swimming the next day…bruh, I wish it was that easy!

2. “Each time I go down you, you have your vagina already wet…”

An old boyfriend once explained that if I was having cramps, I just needed to do what his ex did: “there’s this one yoga pose that will make that shift in the uterus that usually takes a few days happen in just a few minutes. It drops, and then your period is done in one day instead of four or five”. He couldn’t elaborate any further, (what “shifts”? What “drops”?) But he swore he was 100% right his ex cut her period down to one day with yoga.

4. Where does pee come from?

We don’t pee out of our vaginas. It’s the urethra.

I was complaining about my period, and this awful guy goes “just piss it out for f–ks sake.”

6. It takes a little more than five minutes, guys.

Person on TV gives birth. 5 minutes later, belly is flat and back to normal.

THATS NOT HOW THAT WORKS.

Also, babies at TV births are squeaky clean when presented to the mother. No fuss about vernix, blood or wrinkles.

TV shows births that lasts minutes and not hours… I’m so tired of watching shows where mom’s water breaks and 4 minutes later she has a baby and 5 minutes later she’s doing cartwheel to evade a killer.

My first kid took 12 hours to come out after water breaking.

Had a guy friend in college who seriously thought women leaked blue liquid during their periods, like what you see in maxi pad commercials.

I was on my period and I had horrible cramps. One of my guy friends came over to keep me company but he wasn’t really prepared for how much pain I was in. I was crying bc it hurt so bad and the poor guy really wanted to help but didn’t know what to do so he just suggested that I ‘ push out all the blood at once bc that usually helped him when trying to stop a nosebleed ‘. After he said that I looked at him like ‘wtf’ and he said ‘ what? Doesn’t it stop hurting once all the blood is out?’ I explained to him what happens to a female body when we get our period and he was just shocked, it kinda cheered me up tho bc I thought it was hilarious.

My (female) bff (male) was my date to the prom. Because of my awful luck, I happened to be on my period.

As we exited my car, I grabbed a handful of tampons to toss in my clutch and my date asked me “Omg are you having 8 periods??”

Had a very amusing convo with a gentleman once. Dude was confused why we would need pads. He asked why we didn’t just go to the toilet more often on our periods. He thought that we were able to hold our period in line you do with pee and pads are only if accidents happen. So his reasoning is that if women would be more careful we wouldn’t need menstrual products. Props to him, he was apologetic after I explained it to him and overall respectful.

Every single time I hear anything even close to “her vag is loose because of x y z reason” I lose 5 years off of my lifespan.

15. All shapes and sizes

When guys think that long labia is a blown out vagina that’s been pounded by hundreds of men. No dude. That’s what some vaginas look like.

The best situation I can think of was something a friend of mine said once. His sister was breastfeeding and said something like, “I don’t know if I have enough left“ to her baby. So my friend kindly suggested that someone else can volunteer and asked me. I said well I’m not lactating, since I don’t have a baby and he was honestly shocked to learn that only women who actually gave birth are able to breastfeed. He was convinced every woman just casually has boobs full of breastmilk at all times. He was 25 at that time. I will never forget this.

If a woman has a real orgasm, she just sprays breast milk everywhere, basically turning her into a lobby fountain.

A guy once told me he know i was a virgin because my boobs were small. That boobs grow every time a woman has sex. Jokes on him, I’m just a sl-t with small boobs.

20. “Everyone who has periods has different experiences with them.”

Dude, just because your last girlfriend had 3 days of light bleeding a month doesn’t mean that all women do. Some of us go for 10 days a month and have to change out our tampons and pads (and yes, we are wearing both because it’s that bad) every hour or so for 3 or 4 of those days.