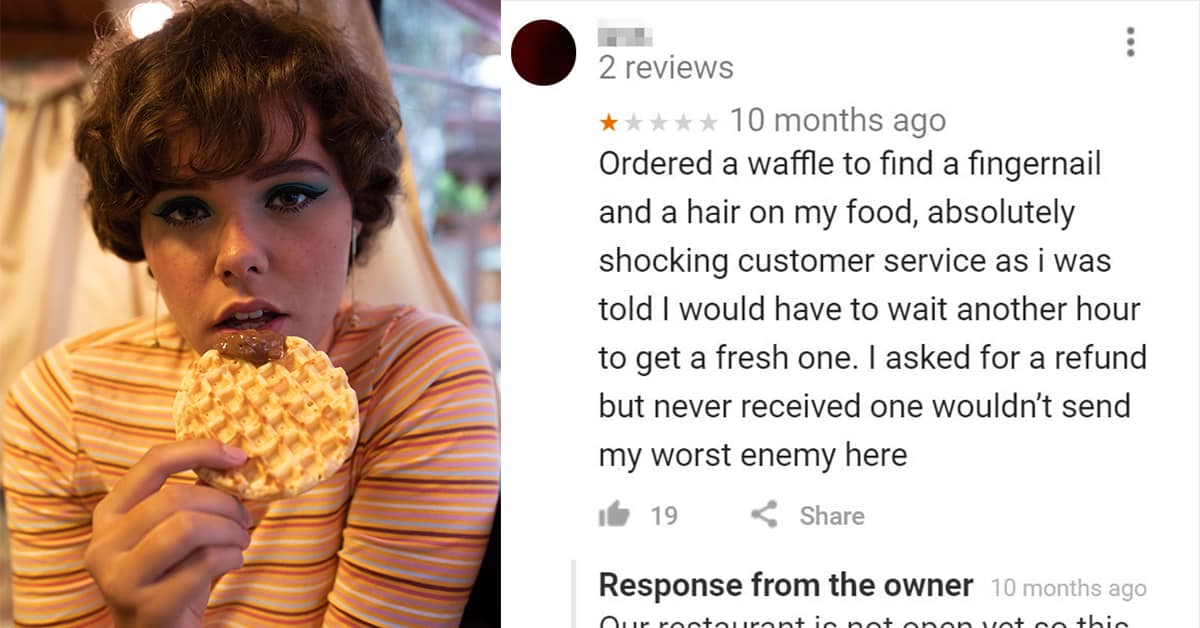 Anyone who has ever waited tables, or worked in a restaurant, knows the world is full of annoying customers, who, let’s face it, are not “always right.”

In fact, the problem of terrible customers is so rampant, it’s pretty much the entire premise behind popular “Karen” memes like this:

But, I’ll just go ahead and say it. If you’ve taken time out of your day to go online and write an angry review, you’re probably a jerk.

All you had to do was not go there anymore. Or even just accept that sometimes, even when people try their best, stuff happens and it’s not reflective of their normal, everyday course of business.

You need someone to be punished. You head home eager to swing the fiery sword of justice on Yelp. *clickity-clack* “wah-wah-wah I’m telling on you.” Grow up.

So, yeah, I’ve worked in restaurants. You can probably guess whose side I’m on, thus we’ve taken the time to support our local restaurants by rating their responses to bad Yelp ratings.

Instead of stars, we’re using a simple 3-fire emoji scale, as follows:

🔥🔥 : Advanced level 2nd-degree burn, but you could have gone further.

🔥 : Novice 1st degree burn, could have been meaner, but hey, you’re not an a-hole so you should probably not be too expert when it comes to burns anyway, right?

Psst, full-disclosure, there won’t be many 1-🔥  reviews, cause these ar pretty savage.

1. You know you’re a jerk when you leave a review for a restaurant that isn’t even open yet.

Personally I would have made some snide comments about the customer needing a time-machine to travel to May 12th or later, but short and sweet works too.

2. All too often, bad reviews are the result of a customer acting like a jerk, not the staff of the restaurant itself…

Not bad, but I feel like the chest hair thing could have been explored a little more. I mean, who does that?

3. Oh dang, you know people can see your username when you comment, right?

Short. Sweet. Simultaneously defends the negative review and calls out the commenter on giving himself a 5-star review. Pretty perfect.

Sometimes you’ve gotta take the high road and simply remind the customer of your policies, and that works. Good for you for not engaging in the troll bait, but for me, yea, I would have made a big long drawn out sarcastic comment about how we, as a business, will never be able to survive without the patronage of Scott E.

Roasting parents for not taking care of their kids is pretty much every restaurant worker’s dream, so while this burn covers most of the bases, could have been meaner.

6. What a thorough response. Basically a full legal brief…

Flawless. This guy should be a Yelp Review defense lawyer.

Pretty good. I might have said something like “This comment could be the topic of a graduate thesis in Philosophy called — The Non-Existent Lobster Paradox: A Time-Space Thought Experiment.”

9. In fairness, it’s possible his wife divorced him because of their terrible anniversary meal. J/K what a jerk.

Digging deep into the personal details on Facebook? Especially the fact that they’re single? Flawless execution.

I mean, getting a customer to reverse their review AND suggesting they have a drinking problem? That’s some advanced savagery.

Ok, nice burn, but I’m giving it a 1-🔥 rating because let’s be honest, I will sit at a coffee shop using Wi-Fi after having only bought a coffee. (Though, I suppose the difference is I would never be entitled about that.)

12. I wonder what % of negative Yelp reviews are from disgruntled employees?

Yea, so I pretty much always assume 50% of negative reviews of businesses are from disgruntled employees, and I’m happy when those businesses make that clear. That said, not a lot of witty meat to this comment. Maybe next time comment on how bad they were at their job and why?

13. Someone’s got ants in their pants…

Clearly the customer did NOT see this response coming. And it hits on everything, in detail. But not before the icing on the cake: go someplace else. Chef’s kiss!

14. Take your big children to McDonald’s.

Oh, heck yea, responding in Italian to a clearly American customer is the ultimate. It allows you to be sarcastic in a way they won’t understand, but also simultaneously mocks their ignorance of your culture and language.

Aww. I feel like my mom wrote this response and thought she was being merciless, however, it’s a little nice for my taste.