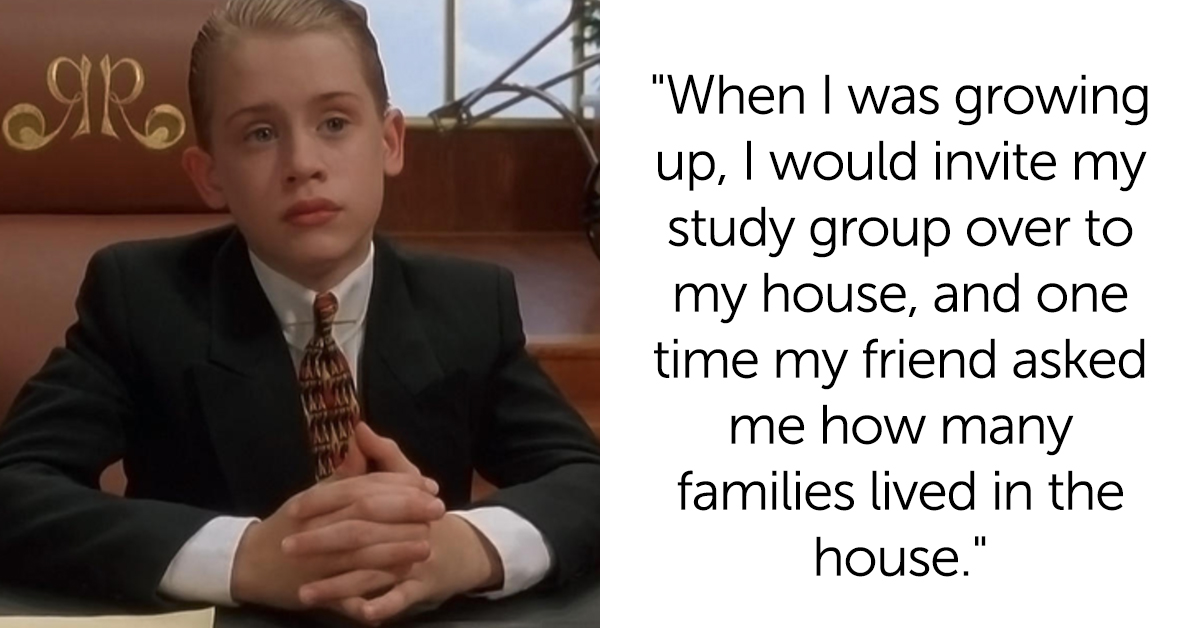 Am I already rolling my eyes at these people? Yes. Yes, I am.

It’s fine to grow up privileged, but you should be given an understanding that not everyone in the world grows up like you do — and that responsibility falls to your parents. It’s important to know that people who do services for your family are important members of the household too and that not everyone you met will have access to the same resources.

“When I was growing up, I would invite my study group over to my house, and one time my friend asked me how many families lived in the house.” —victoriaroth

“I realized when I was 14. My parents were gonna take me on my birthday trip and I choose the Bahamas. They let me bring as many friends as I liked. I brought five and while boarding the plane, my friends were confused as to why nobody else was there. I later discovered that we had a private jet. Also, I had never been to another US state but I had been to many luxury country destinations. That’s what I thought was the norm. When I turned 18, my parents told me that we had a large sum of money (in the millions). I don’t know how I didn’t notice sooner.” —reaofsunshine0608

“I never realized I was rich until I moved out and I had to vacuum for the first time. My sister had never cooked before. We used to have a staff for that. I also realized we were rich when I was given an iPad for my birthday, back when iPads weren’t even released in my country. I brought it to school with me to take notes, and people lost their minds.” —jentevanwingerden

“I didn’t realize how rich I was until I realized how many of my friends stayed home for spring break and the only vacation for them was driving to the beach while I went out of the country to the Caribbean and stayed at luxury resorts. Also, they kept saying that my house was a ‘mansion’ compared to theirs.” —bhnguyen20

“This girl I knew asked me how many square feet my house was…to which my only reply was ‘Which one?'”—ebspalding2014

“I realized I was better off than a lot of my classmates and friends pretty early on, but I didn’t realize I grew up WEALTHY until middle school when people started to refer to me as ‘the rich girl with the big-ass boat.'”—elizawithaz

“I realized it when I went to high school. My elementary and middle schools were full of other wealthy kids, but there were middle-class kids at my high school. Suddenly at age 14, I realized it wasn’t normal to have two houses, four cars (two Mercedes, a BMW, and my Volvo), a boat, Disney Vacation Club memberships, multiple international vacations each year, season tickets to the symphony, the opera, the ballet, regularly attending theater in box seats, frequently dining in Michelin-starred restaurants, getting a closet full of expensive new clothes each season, and having memberships at multiple country clubs with private golf lessons.” —robpub

“I realized maybe we made more money than most people when I found out that most people don’t: pay their bills in full every month, are able to thrive off of only one working person, eat takeout multiple times per week, get new Apple devices almost every year, and go on expensive vacations every year. And I have a much bigger house than my friends with siblings.” —placeholderiguess

“I realized we were well off when my mom kept buying me those expensive BlackBerries. Then she bought me the BlackBerry Porsche before I graduated to Apple products. Everyone at school was amazed how I kept having new phones while they stayed on their old ones for 3–4 years.” —wolfieness

“I wasn’t a popular kid and I had very few friends who weren’t neighbors until the sixth grade, and even then they lived in the same types of houses as me. It took until the ninth grade to realize not everyone has three floors in their houses. My friends would say that my house was so big when I thought it was one of the smaller ones. I realized people can’t just easily shell out the money for our AP tests, or field trips, or college.” —turtles2000

“My husband grew up well off and I grew up very poor. He only realized the privilege he had when we shared childhood stories and he got to know my parents. He still can’t believe the things I had to go through and my stresses over minor money issues.” —i4790ac856

12. Recession was a breeze

“I realized we were rich when the 2008 recession had absolutely no effect on us. We still had tons of music lessons, other expensive hobbies, and still went on vacations.” —u/Frequent_Worth6606

“My dad always told my brothers and me how fortunate we were as we grew up. However, it didn’t hit me until I learned that the 2008 recession was a thing until six years after it happened.” —u/ohboythisisawkward

“A kid in my class bragged the day after Halloween that he and his friends had gone trick-or-treating on our street ‘where all the rich people live.’ I had always known we were well off, but would not have described us as rich because my family didn’t have live-in staff, our property was not fenced off, and my parents didn’t have drivers.” —u/SniffleBot

“My friends were talking about all of their student loans and how hard they had to work to pay for tuition, and I was just sitting there like, ‘Oh.’ Mine was covered 100% by the folks. I was the first person in my family to go, and they didn’t save for it or use any programs. And that was just the first time it really hit me that my family wasn’t the norm.” —u/ayarbee

“I realized it when I remembered that my father used to give me twice as much money as I earn now. He called it ‘early inheritance.’ I am a well-paid software developer.” —u/ZeroTwo81

“Going to other people’s houses and seeing they weren’t as big as mine made me realize we had money. It took me a long time to find this out because I was not very popular growing up.” —u/KindofPolitePerson

“I had to get a recommendation for my private high school admissions from my public school teacher, and she asked in front of the class, ‘Do you know how much the tuition is?’ I told her. I had no concept of what that figure meant. She asked, ‘Your parents can afford that?’ And my classmate said, ‘His family is rich. They have fancy cars and a plane!'”—u/doobeezoo

“My parents were wealthy, but since they were good ol’ Midwestern folks, they also wanted my siblings and me to work early and work hard. I got a job at 14 at a local sandwich shop and had a coworker who was around the same age. I just assumed that she didn’t need to work and was only doing it for the ‘character building’ aspect like I was. I asked her what she was going to do with her first paycheck, assuming it would be something fun, and she told me she was going to give it to her parents because they were really struggling and needed help with the bills. I was shocked. I had never met someone who needed to help their parents with bills at only 14 or 15.” —u/smugmisswoodhouse

“When I was 14, it clicked. My brother, who’s two years older than me, crashed his $45K Silverado he’d had for three months, and our dad bought him another one the next weekend.” —u/Cassandra_Canmore