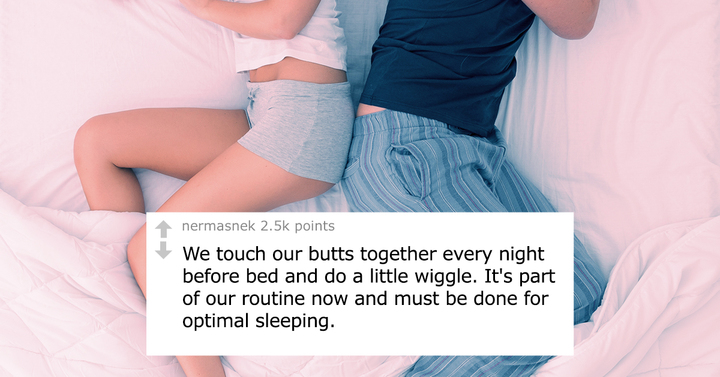 Being in a couple is like being in your own little two-person universe—and things get weird in there. In a healthy relationship, the weird stuff is mostly benign, but you probably wouldn’t want to explain it to anyone without hiding behind an avatar. That’s probably why this thread on r/AskReddit blew up. Redditor u/FinSonic asked everybody, “What do you do with your SO that isn’t normal?”

It’s possible they were hoping for lots of tawdry secrets, but what ended up happening was comment after comment about cute stuff couples do together that they’d never really tell anyone about without the anonymity of the Internet. A lot of the things they do involve taking kissing to an alien level of intensity.

Scrolling through might make you say “aw” or “ew,” but it will also definitely make the things you do with your partner seem totally normal in comparison.

We have a ‘Kiss Monster’ (spoiler alert: it’s me with a blanket over my head), that visits my SO every now and gives him loads of kisses before slinking off again into the night.

We have never acknowledged that I am in fact, the Kiss Monster. —MonocromeRainbow

We do ‘inverted kissing’. Instead of kissing the lips, one of us surprises the other by opening their mouth big and covering the other party’s puckered up lips.

It’s like kissing the void. It feels really f*cking uncomfortable and it’s hilarious. She always does it to me when I’m expecting a kiss.

Bonus points if you can kiss the void for over 5 seconds or have your open mouth over their mouth for a long time. We discovered this when I jokingly opened my mouth during a kiss and she started laughing and going ‘noooo’ —ask-design-reddit

We’ll open our mouths and put our lips together, then sing a pitch and very very slightly raise and lower it together and it creates this weird vibrating dissonance with the notes. —ninjakaji

We have a 17 year running game of stealthily pinning a clothespin to the other’s clothes. Sometimes, no clothespin for months, and then bam. One in your armpit. —octopusboots

Well, I just wrapped her up in a brown blanket, rolled her back and forth in bed and told her “Shhhhh be bread, it’s okay, just be bread, shhhh, loaf-girlfriend, it’s okay to become bread” while she cackled and screamed “I DON’T WANT TO BE BREAD” —ThirdFloorNorth

Dated a Swede for a few years. When he taught me how to say I Love You in Swedish, Jag Älskar Dig, I remembered how to pronounce it by saying it as Jog Racecar Day. For the rest of our relationship whenever we wanted to say “love you” or would give each other cards etc, we would just say Racecar. —vinoKwine

Penis drawings. I don’t remember who started it but we hide the same penis drawing for the other one to find. She put it in my suitcase when I went away on a hunting trip with my buddies and I had to explain why I had a crudely drawn wang on a sheet of notebook paper packed with my socks. When I returned I hid in the bottom of her underwear drawer and it took her a few months to find it. She then hid it somewhere and I haven’t found it yet, that was five years ago. She told me I’ll find it eventually but I’m afraid of where it might be. I have told her that if she dies before me that she is getting buried with it and I win. —Danz322

It devolved in to doing it randomly so that we could catch each other by surprise and win! —Toasterinthetub22

We sneak up on each other and bite each other on the neck to assert “dominance”. We use the “dominance” to win trivial arguments like who do our animals love more. —FunkySauron

I draw faces on my boobs with washable markers to send to him to cheer him up. —innosins