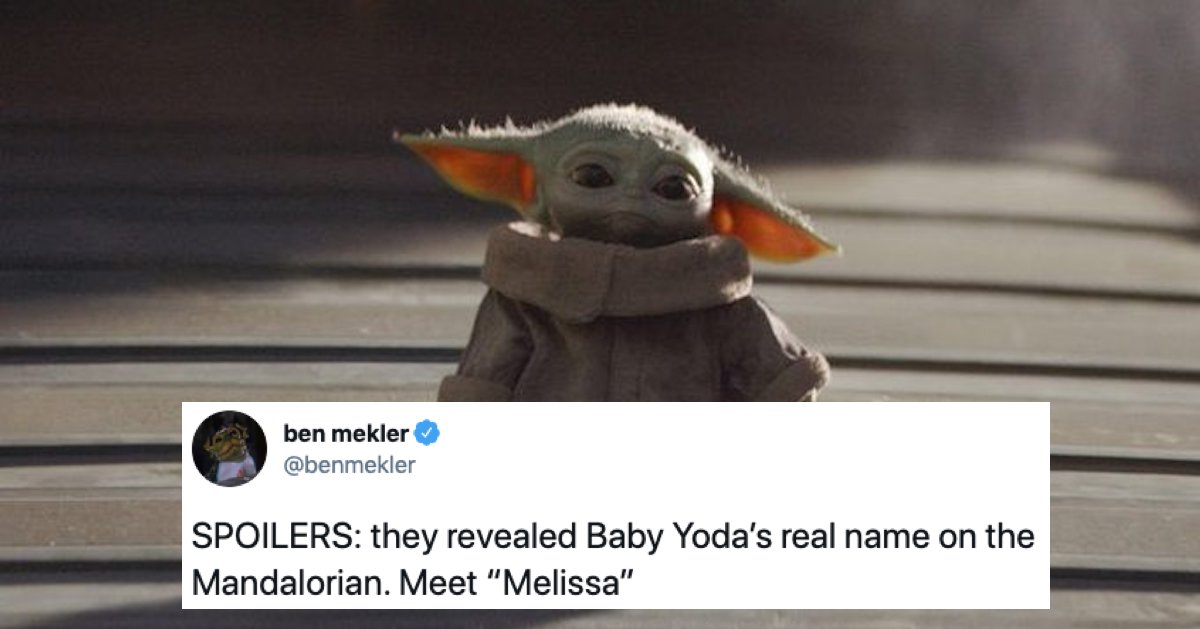 Ever since its premiere, The Mandalorian has kept viewers hooked with its expansive Star Wars universe set pieces. But the biggest draw was definitely a little green guy who was quickly dubbed Baby Yoda. Yes, there were some naysayers who insisted that the Baby Yoda was not actually baby Yoda, because the timeline is off, but we paid them no heed. All that matters is that the character looks like Yoda and is clearly a baby.

Unfortunately, on Friday’s episode, this illusion was permanently shattered when fan-favorite Jedi Ahsoka Tano, played by Rosario Dawson, communed with Baby Yoda by using the force and discovered his real name. It’s Grogu.

Yesterday, we learned more about Grogu and his tragic backstory #TheMandalorian pic.twitter.com/U6zUrrkNa5

“Grogu and I can feel each other’s thoughts,” Ahsoka says. “He was raised at the Jedi Temple on Coruscant, many masters trained him over the years. At the end of the Clone Wars when the Empire rose to power, he was hidden. Someone took him from the Temple. Then his memory becomes… dark. He seemed lost. Alone.”

This little speech revealed a great deal, including the likely fact that Grogu escaped all the younglings being massacred by Anakin. Let’s skip over the fact that he stood by as his friends were murdered and focus on the cute little noises he makes when anyone says “Grogu.”

Adorable. And yet, the name is not without controversy. The character may still be cute, but not many people can deal with Baby Yoda’s real name being Grogu. It just doesn’t have the same ring as “Baby Yoda.” What do you think?

Made a baby Yoda cake for my kid's birthday today, and *now* I find out his name is Grogu #Grogu #babyyoda #babyyodacake pic.twitter.com/FBBuD4BC31

Me when someone says baby yoda pic.twitter.com/XwArfadcLw

SPOILER ALERT in the new episode of The Mandalorian they reveal that Baby Yoda's real name is Bobby Yoda.

For those keeping score: Baby Yoda is Grogu , LeBron James is Gwangi and Zendaya is Meechee

Grogu leaving the Jedi temple while Anakin was killing the younglings #TheMandalorian pic.twitter.com/yC9vhz1lnG

me when i say grogu instead of baby yoda pic.twitter.com/LtzJLJhVFH