Earlier this year, teen pop star Billie Eilish was caught in a paparazzi pic without her signature baggy threads. She has a perfectly normal woman’s body, but the standard for most women in Eilish’s position is to be childishly thin no matter what their natural body type is. She has always purposely worn loose clothing to keep herself from being objectified, so the trolls of the Internet leaped on the photo with a scary thirst. Eilish was body-shamed by all sorts of anonymous dweebs.

Billie eilish is beautiful. The only people who don’t see that is little boys that have high expectations for women and think being “fat” is ugly. No it is not. This is why she feels like she has to wear baggy clothes all the time to hide her body from boys like you guys. pic.twitter.com/XzIUbjdhlN

Soon after, Eilish spoke out about the experience a little bit in her Instagram stories. She basically said that keeping things in perspective helps her separate herself from the Internet’s response to anything she does, including living in her body in public. 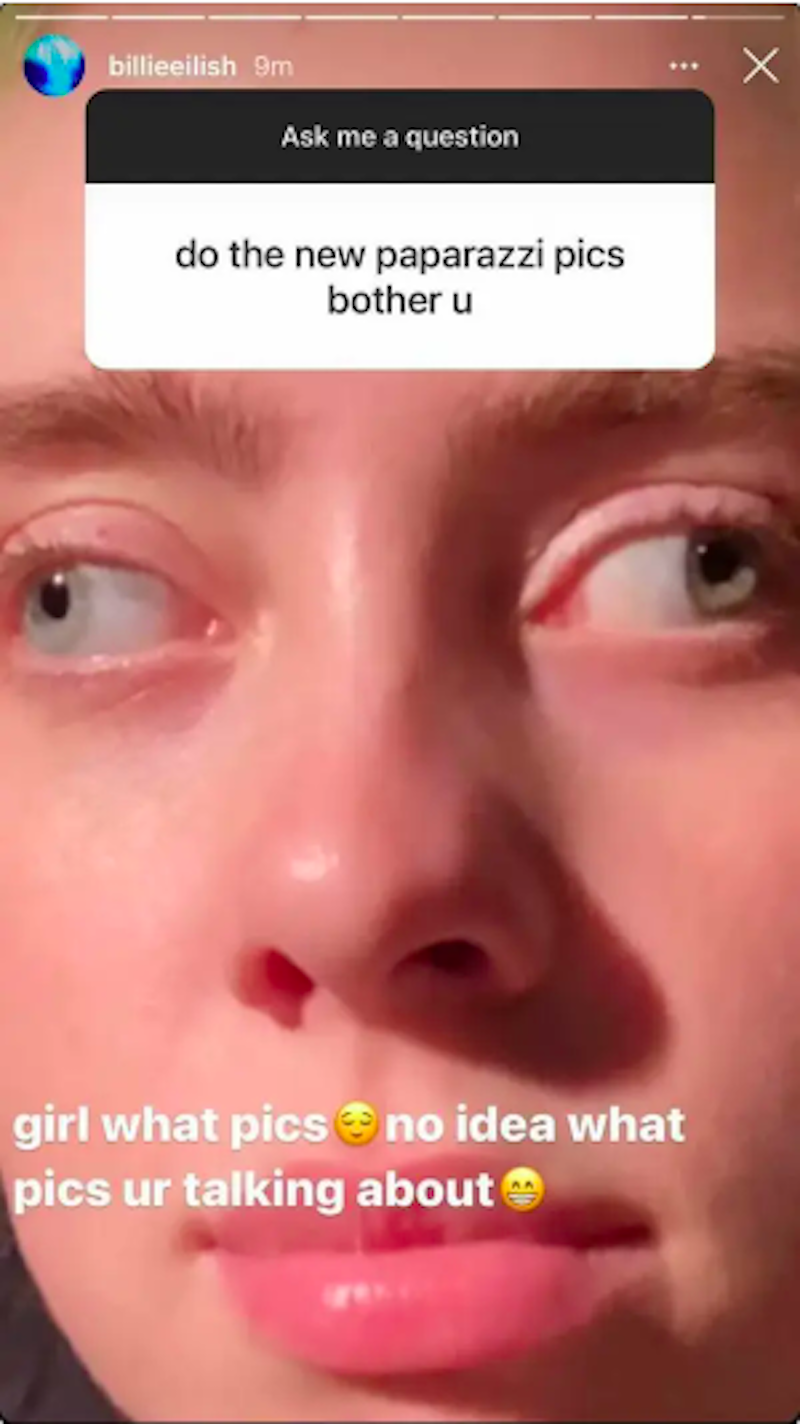 Now, in the fourth installment of her “time capsule” interview for Vanity Fair, she spoke out about it more. After being asked what the biggest rumor about her was, she related it to the photo.

to all of the people who trashed billie eilish's body on this goddamn app… from the bottom of my heart f*ck you pic.twitter.com/G6XnWfW38k

“There’s this picture of me, like, running from my car to my brother’s front door on like, a 110-degree day, in a tank top,” Eilish says. “Everyone’s like, ‘Damn, Billie got fat!’ And I’m like, ‘Nope, this is just how I look! You’ve just never seen it before!'”

“I love having kids relate to me and tell me that I make them feel comfortable in their bodies,” she explains. “If I can do anything, I wanna do that.”

In another section, she also comments on her relationship to Googling her own name and staying off of Twitter because that’s where people are “so mean.” That is generally true, but a lot of people are on there defending Eilish after the subject of her photo started trending again:

@billieeilish I know I'm late as fuck with this, home girl is a beautiful goddess, the world fat shaming her the first time she comes out in public not wearing super baggy clothes sickens me. Billie you're a beautiful young lady, and don't let this hateful world bring you down.

if I see one more person scrutinize that photo of Billie Eilish in a tank top I'm grabbing my nerf and going to war. it was an unflattering angle, EVERYONE HAS THOSE, get over it. she is a powerful ass woman. she is beautiful. she does not need your approval of her body. stfu.

Leave Billie Eilish alone! She’s beautiful and even if she weren’t, she’s more talented than all of the body-shamers living in their stank basements combined.