Taylor Swift’s new Netflix documentary Taylor Swift: Miss Americana is out and blowing the minds of fans and a quickly shrinking number of enemies. The documentary touches on a number of personal issues in Swift’s life, including past struggles with eating disorders. One of the clips in the film features comedian Nikki Glaser, who makes some comments about Swift’s skinniness and her propensity for surrounding herself with thin models.

In a long Instagram post featuring her wearing classic Red merchandise, Glaser admits that she regrets those comments, and offered a sincere apology to the singer.

“I love @taylorswift,” Glaser begins. “Unfortunately, I am featured in her new documentary as part of a montage of asshats saying mean things about her, which is used to explain why she felt the need to escape from the spotlight for a year. It’s insanely ironic because anyone who knows me knows I’m obnoxiously obsessed with her and her music.” 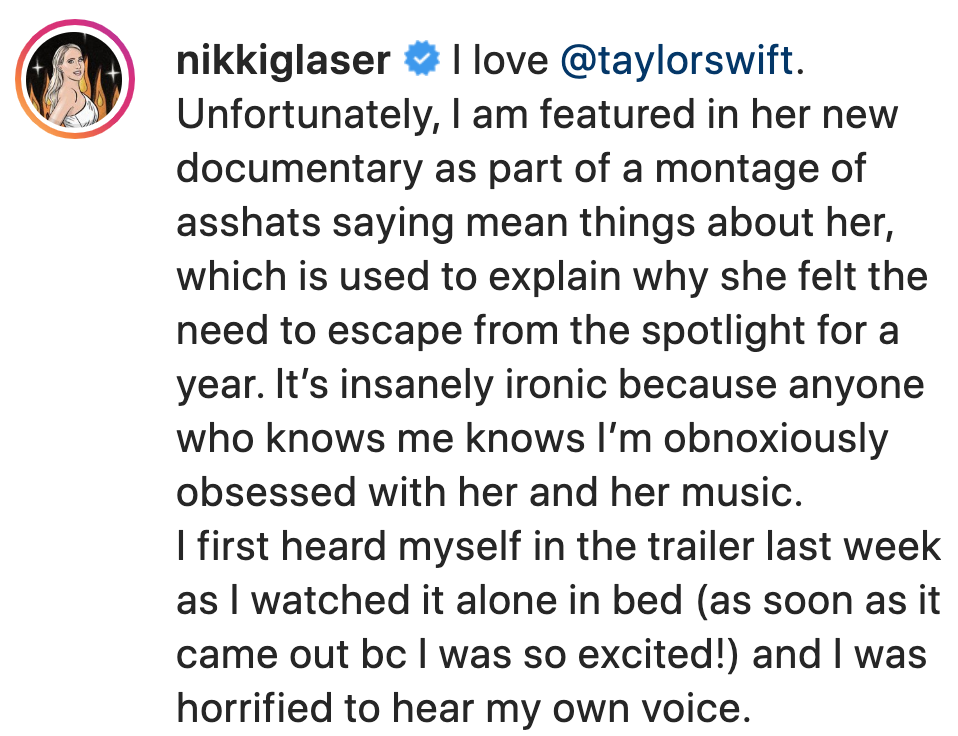 She continued, “The sound bite was from an interview I did 5 years ago and I say in SUCH a sh—tty tone, ‘she’s too skinny; it bothers me… all of her model friends, and it’s just like, cmon!’ This quote should be used as an example of ‘projection’ in PSYCH101 textbooks. If you’re familiar with my “work” at all, you know I talk openly about battling some kind of eating disorder for the past 17 years. I was probably “feeling fat” that day and was jealous.” 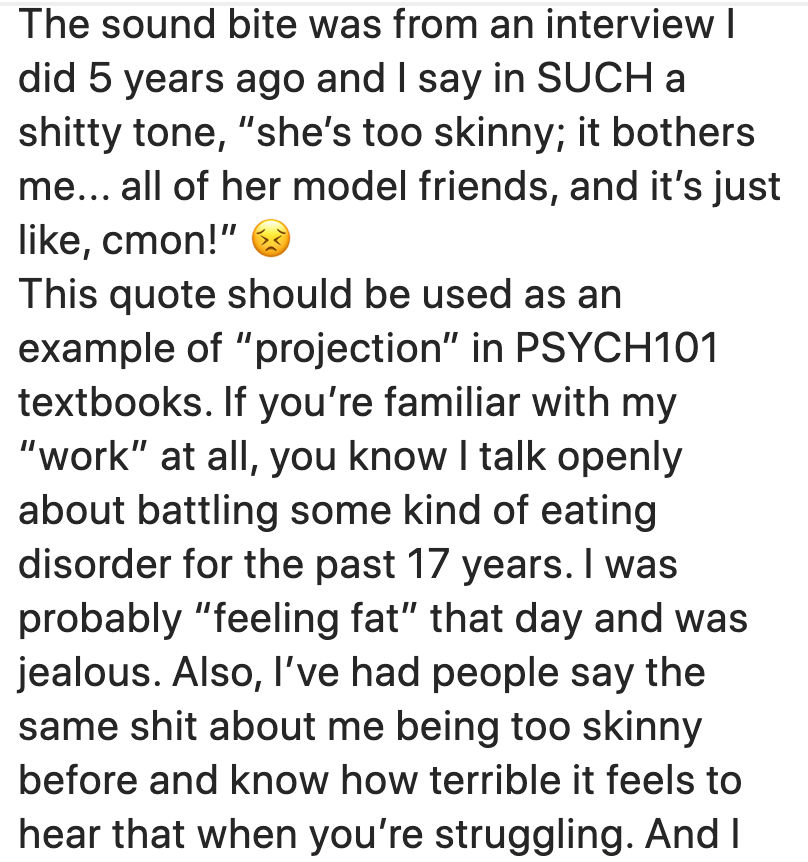 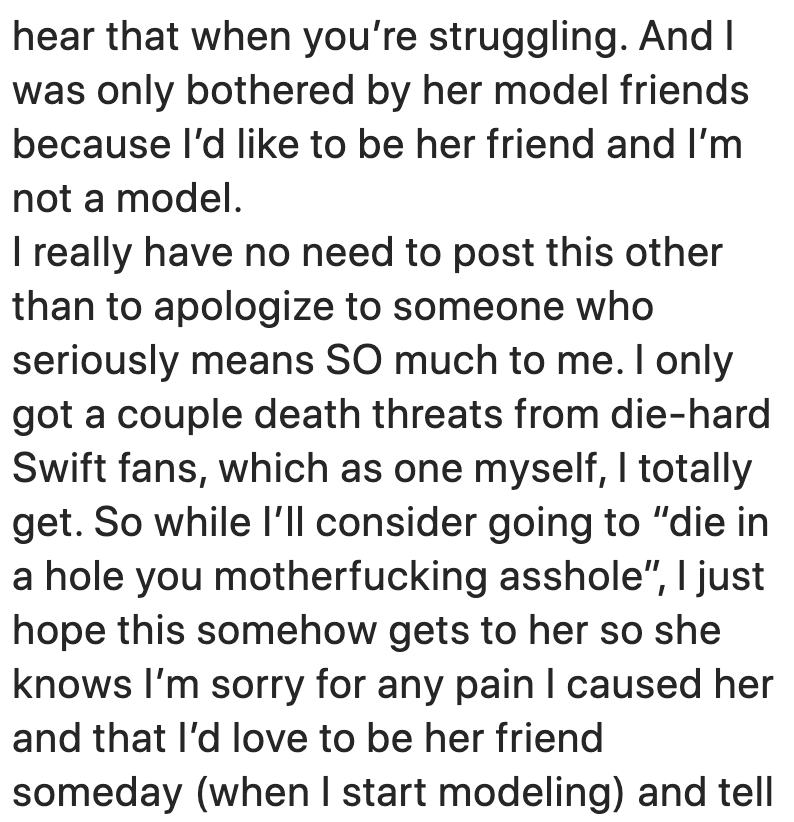 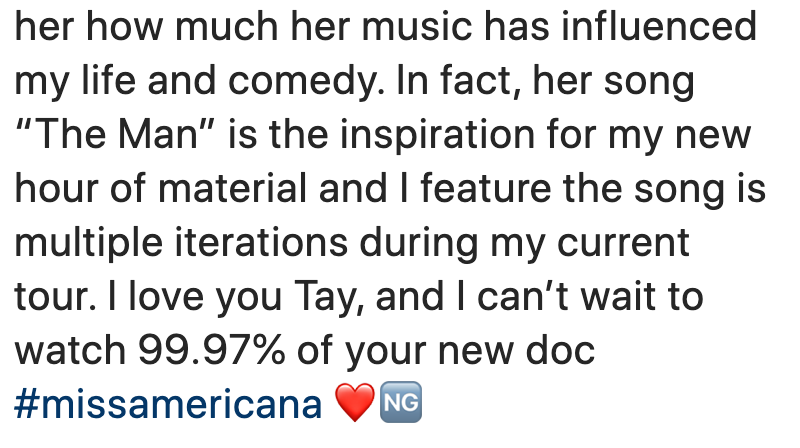 Glaser adds that she’s had people say similar things about her and it was hard when she was struggling with her own eating issues.

“And I was only bothered by her model friends because I’d like to be her friend and I’m not a model,” she joked.

“I really have no need to post this other than to apologize to someone who seriously means SO much to me,” Glaser wrote. “I only got a couple death threats from die-hard Swift fans, which as one myself, I totally get. So while I’ll consider going to ‘die in a hole you motherf*cking a**hole,’ I just hope this somehow gets to her so she knows I’m sorry for any pain I caused her and that I’d love to be her friend someday (when I start modeling) and tell her how much her music has influenced my life and comedy.

“In fact, her song ‘The Man’ is the inspiration for my new hour of material and I feature the song is multiple iterations during my current tour. I love you Tay, and I can’t wait to watch 99.97% of your new doc.”

Apologies are hard to make and this is a pretty classy one. But to make the situation even better, Taylor Swift saw Glaser’s post, and responded with a warm acceptance.

“Wow,” Swift commented. “I appreciate this so much and one of the major themes of the doc is that we have the ability to change our opinions over time, to grow, to learn about ourselves. I’m so sorry to hear that you’ve struggled with some of the same things I’ve struggled with. Sending a massive hug.” 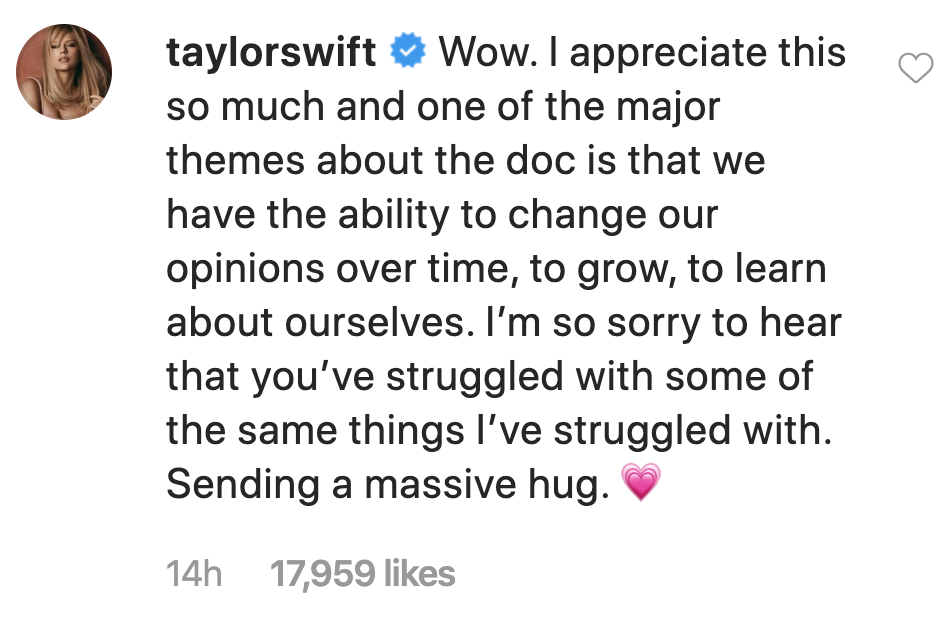 People can change and best of all, they can learn compassion.