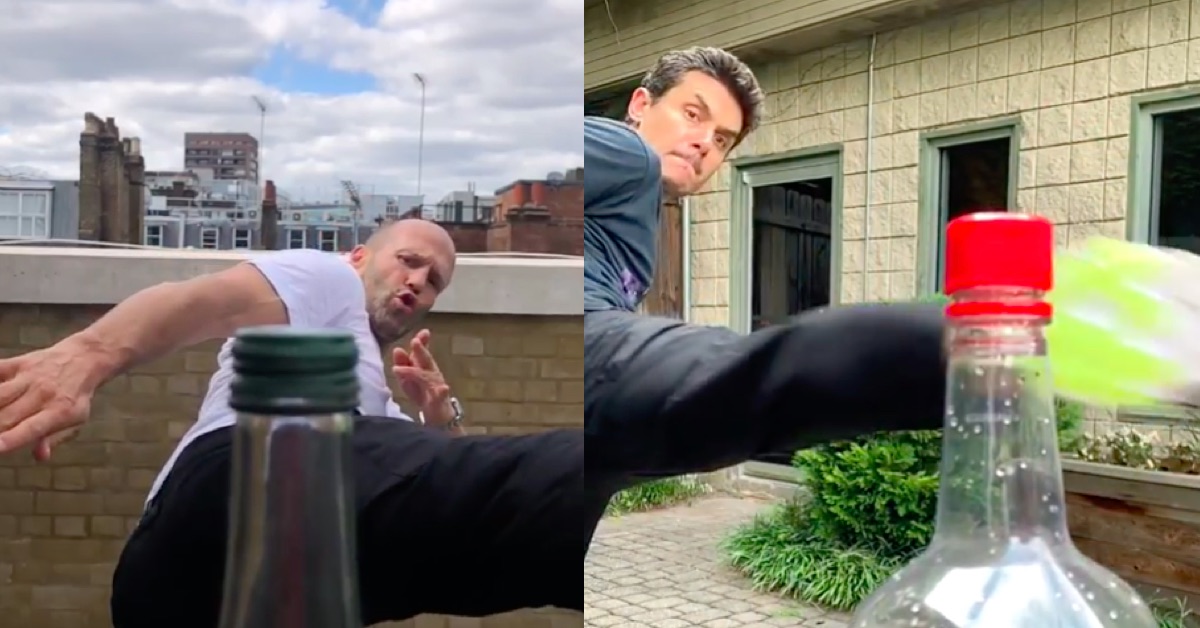 Our society has so diluted the word “challenge,” you probably won’t take me seriously when I say that the new Bottle Cap Challenge is seriously impressive.

If getting a bucket of cold water dumped on your head or eating a spoonful of cinnamon is considered a challenge, how hard could something involving a bottle cap be?

Well, feast your eyes on this video of Jason Statham executing a precision kick to the top of a bottle, neatly unscrewing it so he can enjoy the refreshing beverage within.

Jason Statham is a bonafide action hero, so executing cool looking and difficult moves is kind of his thing. Can just anyone do the Bottle Cap Challenge? Or, at least people who aren’t paid to look cool?

Well, according to Mashable, the Bottle Cap Challenge found its way to Statham via John Mayer.

Maybe you think John Mayer is super cool, but you can’t argue that his job is to strum the guitar. He’s no martial artist. My guess would be that in a fight with a bottle, Mayer would lose. Yet, here he is, knocking it out of the park:

Mayer was challenged by UFC fighter Max Holloway, who was in turn challenged by Karo Pashikyan, an MMA fighter from Kazakhstan, who had tagged Statham in his original post. guess Statham was waiting for a few more tags before he took on the challenge. It has since spread to other celebrities, like Guy Ritchie:

That’s kind of it for now, aside from professional fighters. Professional fighters are celebrities in their own sphere, of course, but I’m going to have to tap out here and admit I don’t know who any of them are! There are about 8,000 posts on Instagram hashtagged with #bottlecapchallenge, so you scroll through and see if there’s anyone you recognize.

And if you want to partake of the challenge yourself, make sure to loosen the bottle cap before proceeding, and get all dogs and small children out of the way before you accidentally kick a bottle into someone’s face. It might look easy, but remember: these are professionals.