As horrible as it is to be disappointed in your favorite franchises, there’s something weirdly comforting in knowing that the actors who played the characters you loved so much weren’t happy with how things went, either.

And now people are wondering if Sebastian Stan has joined the ranks of actors wishing their characters hadn’t been done so dirty.

The Marvel actor briefly broke the internet yesterday when he shared a fan’s tweet to his Instagram story.

“Together until the end of the line,” Marvel UK had written over an image of pre-Captain America Steve Rogers and Bucky, Stan’s character. 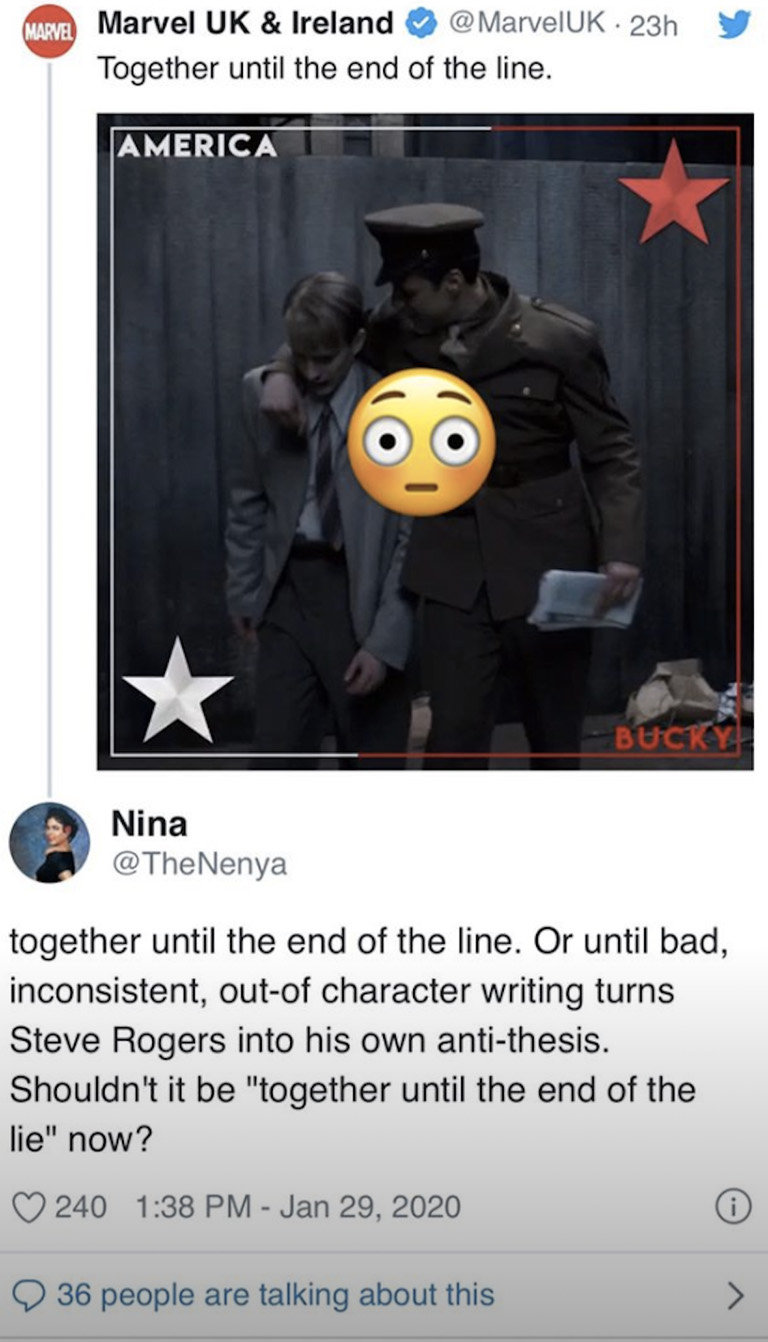 Fans were quick to jump on the post, going absolutely wild over the low-key shade Stan appears to be throwing at Marvel for how the Captain America saga ended.

the crowd boos and i walk offstage, tears stinging my eyes

“she’s right” a voice says suddenly. i look back and gasp. standing in the middle of the 5th row is sebastian stan himself

congratulations to sebastian stan! he overcame his attachment to buckynat and has officially entered 2020 as a stevebuckie. so proud of him ❤️

rip sebastian stan, he ain’t dead but disney about to snipe his ass

Probably the best response of all, however, was John Boyega, aka Finn in the latest round of Star Wars films, “welcoming” Stan with this tweet.

Every Star Wars fan knows Boyega isn’t happy with how things went in his franchise, with him consistently throwing quiet shade at the writing in interviews over the last couple years.

not givin a shit

What is going on HERE pic.twitter.com/yHZWaItz5L

While the Steve/Bucky pairing had a strong fanbase among Marvel fans, a number of Star Wars fans believed Finn and Poe (Oscar Isaac) should end up together, and the respective failure of the franchises to acknowledge the bonds between these characters has been the source of much discontent among fans.

not givin a shit

Unfortunately, the potential for Stan and Boyega’s characters to get their respective happy endings with their guys is over, but one fan had a perfect solution.

In conclusion: stay shady, Mr. Stan. We love to see it. And so does your new BFF, John Boyega.