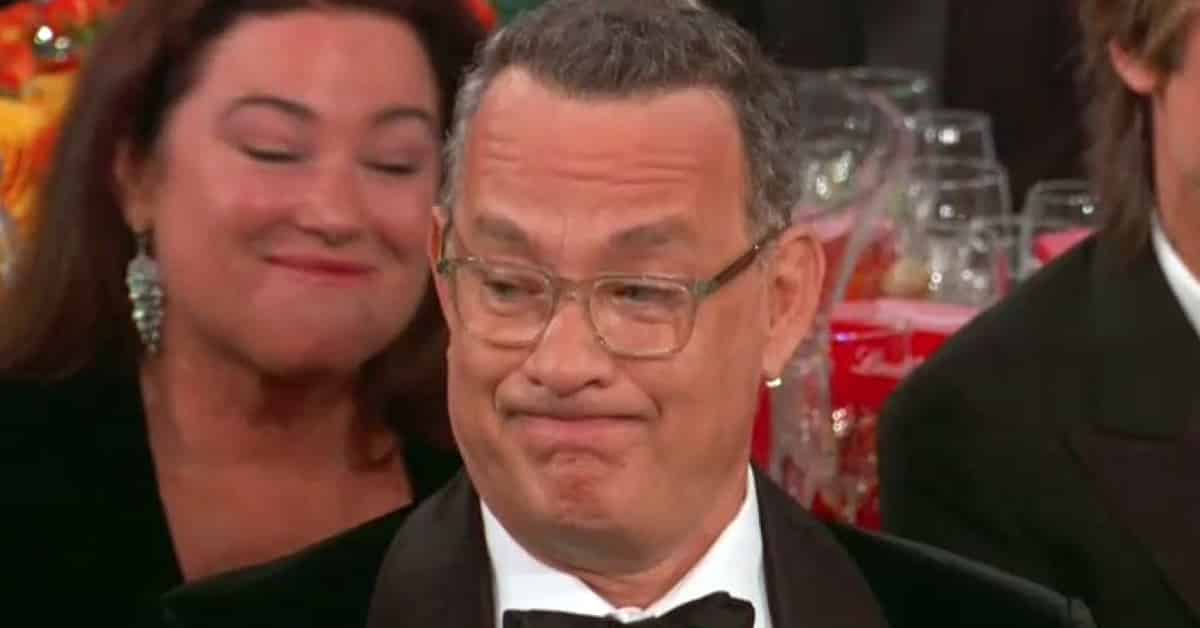 The Brief: Golden Globes Tom Hanks memes appeared on social media after cameras panned to the actor reacting to a Felicity Huffman joke made by Ricky Gervais.

On Sunday night, Ricky Gervais hosted the Golden Globes with the intention of shocking and rattling his audience of Hollywood elites. His opening monologue was a roast, and a lot of the jokes didn’t land, except for the one about how Leonardo DiCaprio won’t date anyone born before 1998. The showrunners theoretically knew what they were getting themselves into when they hired Gervais, but they still didn’t seem prepared for what to do when jokes were met with silence or even boos and hissing from the crowd.

One of his jokes about actress Felicity Huffman particularly bombed.

“I came here in a limo tonight and the license plate was made by Felicity Huffman,” said Gervais. “It’s her daughter I feel sorry for. That must be the most embarrassing thing that’s happened to her, and her dad was in ‘Wild Hogs.'”

Gervais is referring to the scandal that erupted when it was discovered that some Hollywood parents were paying to have their kids admitted into high ranking schools, which is technically illegal even though people do it all the time in all sorts of ways. Specifically, she paid an admissions consultant to have a proctor correct her daughter’s SAT answers.

In May, Huffman plead guilty to one count of conspiracy to commit mail fraud and honest services mail fraud. She was ordered to pay a $30,000 fine, is on probation for a year, has to complete 250 hours of community service and served 11 days in prison. And people in prison make license plates. Get it?

Everyone in the audience got it, too, but they didn’t like it. The cameras turned to Tom Hanks of all people, and his face says it all:

I would like to thank Tom Hanks for providing this brand-new meme for 2020 #GoldenGlobes pic.twitter.com/2frzvP2baQ

Hanks has become the first and possibly best meme of 2020 and the first week of the new decade has barely begun. While most people think he’s expressing disgust with Gervais, his face is definitely open to interpretation.

Some people saw someone disgusted with Hollywood, just like Gervais. Some saw a guy who wanted to laugh. And a lot of people saw Jim from The Office. Below are the best Tom Hanks face memes, long may he live.

Tom Hanks with the Jim face at the #GoldenGlobes 😂 pic.twitter.com/bovxyZdnp1

Tom Hanks is the only thing worth watching at the #GoldenGlobes pic.twitter.com/EaYiwtB7h7

When your parents yell at your siblings #TomHanks pic.twitter.com/OcUS8EEWs2

when your friend goes against your advice: #tomhanks pic.twitter.com/UyT4NP3NjH

Tom Hanks is most of us right now. #GoldenGlobes #goldenglobes2020 pic.twitter.com/kIg9ws22LJ

When your lifetime achievement award is becoming a meme.

Tom Hanks through all of Ricky Gervais’ jokes pic.twitter.com/XOgXxIe1tV