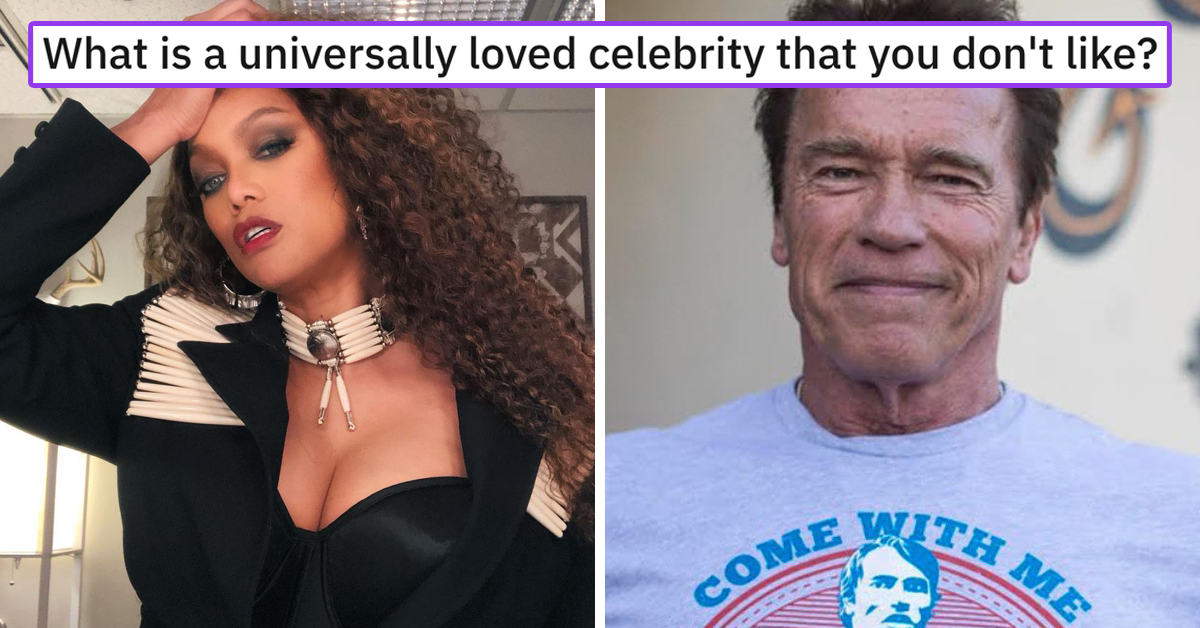 Fame is a weird thing. The more acclaim you get, the more people like you, but it’s a double-edged sword. Just because so many more people know who you are, by the law of large numbers that means there are going to be more people who dislike you.

Some celebrities seem beloved by everyone, but there must be haters out there who don’t like them at all, right?

“What is a universally loved celebrity that you don’t like?”

Some people had negative interactions with these celebs, others don’t like their work, and for some, the celebrities simply rub them the wrong way. Hey, you can’t please everyone all of the time, you know?

Worked in a shop that Zoë Kravitz came into. She was snotty & pretentious. –petra_orla

I pissed off Shaq one time when I was 18 and working at target off I95 back in like 2009 or 2010. He was looking for a cord to go from his phone to a tv in his tour bus. We unfortunately did not have one and he got PISSED. Being only a 5’6 dude, I was terrified. His friend / security guy with him had to calm him down. Me and a few other associates started calling every store around us trying to find one for him. He called me big Dave before I pissed him off and was too afraid to ask him for a picture of autograph after lol. I hated him for the longest time. I don’t hate him anymore but still not a huge fan, I still want an apology from him lol. –Brooksie019

While everyone seems to adore her, Maya Rudolph was pretty nasty to me when she came into my shop with her friends (family members? no idea).

And I want to add – for no reason. I was just a dumb kid who didn’t immediately recognize her and didn’t gush over diamonds, which seemed to offend her for some reason. This was a jewelry store, she was looking at every stone that was decidedly not a diamond, and I was trying to agree that other stones could be more beautiful and meaningful than diamonds. Apparently that was the wrong thing to say, and warranted going out of her way to make me look like an asshole in front of everyone. Great job, I was like 19. Sure learned a lesson from that. –ManyConclusion

Not only is he not funny, and most of his comedy is just being loud, but he cheated on his wife, while she was pregnant with his child. He’s obnoxious as shit and I don’t get why people like him. –iftheronahadntcome

People hate on his kids, but if you listen to how he talks to/about them, it’s a wonder they came out functioning at all. As someone with abusive family, it squicks me the f-ck out.

That, and the constant articles about his and Jada’s sex life. –darthvadersbanana

I used to be indifferent but when I watched her Markle interview, she came across as so f-cking fake. –LordCosmagog

Her voice. The way she puts herself on the cover of every issue of her magazine. Something about her feels fishy, forced, and narcissistic. –realdopesauce

Drake – How can anyone stand him? –rgoldtho

Worker at a hotel where they were filming a movie and Zac Efron was there. Treated us like doormats and was completely belittling. Made a housekeeper cry. F-ck that guy. –samiam871

Jackie Chan is actually known to have several mistresses, illegitimate children, and is a complete sellout to the city that he started from (Hong Kong), courtesy of being a pawn of the Chinese Communist Party. –MechCADdie

Is Tyra Banks well-liked? I hate her and how she treated the contestants on America’s Next Top Model. –fruitakuma

Everything he’s in would be better with someone else. Who? Just about anyone that’s not Brendan Fraser. –partymouthmike

I always found him to be very annoying. –qa567

He deeply unsettles me, but I wanted to like him! –qu33r0saurus

Arnold, the dude used steroids to get big, yet he is an inspiration? All I see is someone who took shortcuts to reach his goals. Goals which I might add are practically impossible to reach without the use of those drugs. He can stand there and preach his life story about how he worked hard to achieve great success. But, how can anyone preach when they’ve not been honest? –Ok-Limit5517

I never cared for his rapid vibrato among other characteristics of him as a performer. –C0VID

Mariah Carey has no talent. –Glass-Star6635

I don’t know why but he irritates me in every movie he’s in. –Little_Capri

He aggravated and stressed out animals for his show. He would intentionally do things to put him in danger for entertainment on his show. Guess what happened? He was f-cking around with an otherwise peaceful animal and it felt threatened and lashed out and killed him. –warble_bird

She was just as much a spoiled brat as her husband. –DelioAlphaTime