Eagle-eyed fans tuning into Season 8, Episode 4 (‘The Last Of The Starks’) of the hit show spotted an anachronistic coffee cup—lid, sleeve, and all—sitting in front of Daenerys Targaryen in a celebratory scene in Winterfell. 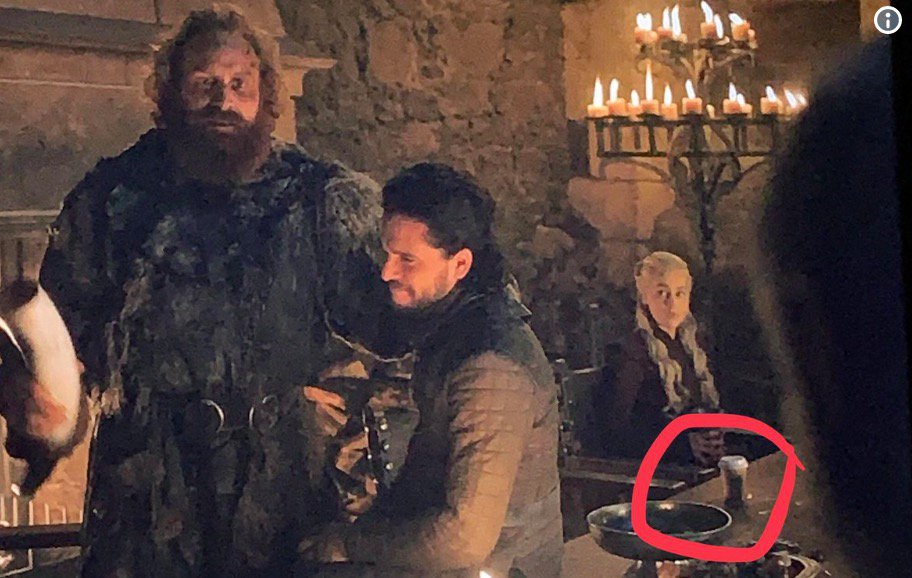 The lone coffee cup was visible at around the 17-minute mark. Just as Jon Snow (Kit Harington) was being congratulated by his wildling friends and Daenerys (Emilia Clarke) was feeling visibly upset and uncomfortable over the adulation, the cup appeared on the table between them.

my favorite show in the entire world forgot a STARBUCKS COFFEE CUP ON THE TABLE WHILE FILMING pic.twitter.com/60z3pOCfg9

“The latte that appeared in the episode was a mistake,” HBO wrote in a statement on Twitter. “Daenerys had ordered an herbal tea.”

The latte that appeared in the episode was a mistake. #Daenerys had ordered an herbal tea. pic.twitter.com/ypowxGgQRl

Game of Thrones art director Hauke Richter said in an email to Variety that items on set often go unnoticed and appear in the final cuts of movies and TV shows, but the mistake was a bigger deal because it had never before happened on Thrones.

“Things can get forgotten on set,” he wrote, according to Variety. “[The coffee cup error has been] so blown out of proportion [because] it has not happened with Thrones so far.”

The gaffe all but took over Twitter for the day.

You're telling me they had TWO YEARS to put together a decent show and they couldn't even spot the goddamn Starbucks cup in Winterfell??!?! #GameOfThrones pic.twitter.com/8opg7nyydv

when the long night is over and they get your Starbucks order wrong pic.twitter.com/8eBHlth5qy

Me trying to comment on the news today:
wow cant believe meghan markle went into labor because game of thrones had a coffee cup in the shot

Though, as one Twitter user pointed out, there was far more important business going on in the background of last night’s episode.

People keep talking about the coffee cup, but how come no one noticed Podrick scored with not one, but TWO bar maids? pic.twitter.com/sVDfEOcdQ0