Fans aren’t too thrilled with last night’s Game of Thrones, and it’s easy to see why after seeing some truly strange narrative decisions first-hand.

Ever since Game of Thrones announced the final season would be whittled down to just six episodes, there became a fear that there wouldn’t be enough runway for the show to reach a satisfying conclusion. More than any episode prior, ‘The Last of the Starks’ really felt like too much in one episode. We started in Winterfell and a little over an hour later saw Daenerys having a staring contest with Cersei at the gates of King’s Landing. In that hour we saw the death of a second dragon, the capture and execution of Missandei, Bronn showing up to Winterfell and not killing Tyrion or Jaime before just disappearing into the night, as well as numerous major character developments that didn’t get their chance to sink in and felt more like the show runners checking off items from a list.

Fans are very worried that a satisfying conclusion is too far gone.

If this is the #GameOfThrones writers/show runners making it up as they go along, be afraid. Be very afraid. What a hot mess that was. Like Ghost, we deserve better. pic.twitter.com/Sf1YEXG5EC

At this rate, Lost won't be the biggest mess up in TV history #GameOfThrones

2. The most interesting parts happened off-screen.

One of the more frustrating parts of the episode was its reliance on off-screen events to move the plot forward. While a lot happened this week, the audience didn’t even get to witness the more interesting bits for themselves.

Jon telling his family his true heritage? Cut away. Sansa telling Tyrion Jon’s true identity? Cut away. Missandei’s capture? Cut away. We were forced to simply imagine these interactions in a series that is at its strongest during character interactions. Arya and Sansa’s reaction to Jon’s news was something we had been wanting to see since season 6 and the show robbed us of that for no valid reason. We also learned that Yara has retaken the Iron Islands and there’s a new Prince of Dorne, but both were throwaway lines.

Let’s talk about Jaime. Hoo boy. Things started out great, as during the festivities he and Brienne finally slept together. We’ve seen this coming for some time, as Brienne has been low-key in love with Jaime for some time. Jaime’s desires for Brienne have simultaneously been building as well, so this was certainly a predicted outcome. It felt great to see them accepting their love for each other, because for Jaime it meant the final rejection of his life with Cersei. Hell, we even hear Jaime tell Bronn earlier in the episode that Cersei is a monster in his eyes.

Then, out of the blue, Jaime mounts up on his horse and tells a sobbing Brienne that he’s actually a pile of trash that belongs with Cersei. Years of his character undone in an instant and with zero previous evidence to validate his actions. It felt very not-Jaime.

Years of character development thrown away just like that. Completely unnecessary, nonsensical. Way too predictable with sloppy writing all over the place. Saying it was a mess is an understatement. One of the worst episodes, ever. #GameOfThrones

Jaime Lannister got bangs and now he’s actin up

but how fucked up is it that poor brienne lost her v card to jamie and he went back to his toxic ex?? turns out even knights fall victim to fuck boys ://

4. Cersei didn’t do the one thing she absolutely should have.

We’ve known Cersei to be ruthless. She doesn’t play by the standard rules of war. She nuked the Sept of Baelor to annihilate all her enemies in one fell swoop and has become so obviously secure as the Queen of Westeros that she doesn’t care what the other lords think of her.

So when her “traitorous little brother,” her military rival, her military rival’s general, and the last surviving dragon are outside her door with dozens of massive ballistae pointed right at them, why doesn’t she take the shot? She could end the war right then and there in what would otherwise be a classic Cersei move, but instead she lets Tyrion, Daenerys, Grey-Worm, and Drogon just walk away filled with fury over the execution of their friend. It was a dumb move, which is not what Cersei’s about.

me to the #GameofThrones showrunners lately pic.twitter.com/bCts5x8MPR

5. Daenerys making Gendry a true Baratheon was a bone-head move.

One of the principle conflicts of Season 8 has been Daenerys’ reaction to Jon being the true heir to the Iron Throne. He now stands as a very real threat to everything she’s ever worked for because of his royal claim. So it made very little sense for her to elevate Gendry into a bonafide Baratheon, seeing as the new “Gendry Baratheon” would theoretically have just as much of a claim to the Throne as Jon or Daenerys. Possibly more so, if you agree that Robert’s true heir should get the claim. Daenerys may be a bit impulsive, but she’s definitely smarter than that.

Also, Arya’s rejection of Gendry seemed cold, even for Arya. I’m not suggesting that Arya needs to ever marry for her character to have a satisfactory conclusion, but I think it was very clear that Gendry admires Arya for more than just her looks and would support her becoming whatever sort of “Lady of Storm’s End” she wanted to be. Arya certainly has feelings for Gendry and Gendry is respectful of Arya’s strength and has made no indication that he would try and hold her back. They deserve to be the power couple they are.

6. The Stark children aren’t acting according to their character.

In this single episode we see Jon tell his siblings the truth about his heritage (probably knowing full-well that they won’t let him abandon his royal destiny), Sansa immediately betraying Jon’s trust, Sansa suggesting that it was actually kind of a good thing she went through absolute hell, torture, and rape, as well as Arya casting aside Gendry to ride south with The Hound and not Jon. For an episode called, “The Last of the Starks,” it did not do the Stark kids justice.

In addition, by this point Sansa has no real reason to hate Daenerys, especially after her personal losses in the Battle of Winterfell. It’s coming across as pettiness for pettiness’ sake.

We all were shocked when Daenerys lost her second dragon this week, but Rhaegal’s death seemed built solely for shock value. You can’t suggest to me that Daenerys, flying on her dragon above her fleet would somehow not see Euron’s massive ships that had to get a sight line on Rhaegal to open fire in the first place. For Daenerys to then dive-bomb the ships and have the bolts miss her and her dragon, despite them being much closer than Rhaegal was also a disconnect from reality.

Again, it felt like the show needed a reason to take away a dragon with very little thought into how that would be done.

I was already upset with Jon for sending Ghost away in the first place, but he man says goodbye to Tormund, Sam, and Gilly but refuses to go give his wounded pup a pat on the head? Absolute bullshit.

Rt if you think ghost was the best boy in winterfell and deserved all the pets jon didn't give him #GameOfThrones pic.twitter.com/JPWj0a0aVg

9. There was a frickin’ Starbucks cup in the shot.

You wouldn’t be blamed for remembering “The Last of the Starks” as the episode where they left a whole ass cup of coffee sitting on the table. The episode just felt sloppy.

This season alone #gameofthrones has:
1. used two different Dany wigs for the same scene
2. forgotten a starbucks cup on the table
3. referred to Gendry’s bastard surname as “Rivers” instead of “Waters”

folks, there has been blatant product placement on Game of Thrones going back to Season 1. don't act like this is somehow a new thing pic.twitter.com/LB6ZujfP5V

Overall, “The Last of the Starks” left fans feeling like Daenerys. 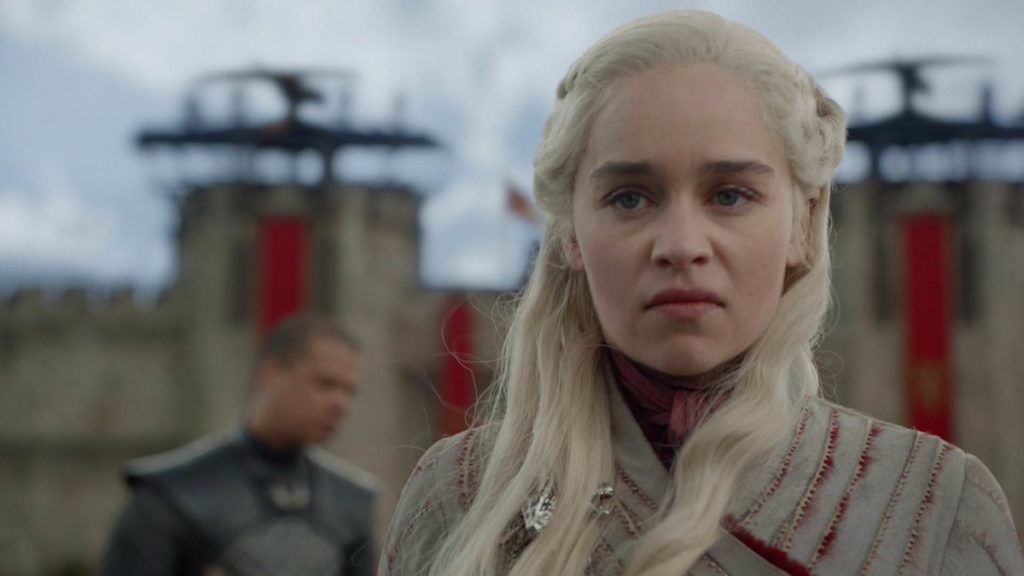 Here’s hoping the show can get its act together in the final two episodes.