There are no heroes in the Netflix docuseries Tiger King. People mostly decide who they hate the most or the least. Most folks seem to focus their energy on main protagonists Joe Exotic and Carole Baskin. Another runner up was businessman Jeff Lowe who was a buyer of big cats, at least partly for reasons of seducing women. He eventually purchased G.W. Zoo, after swindling joe Exotic and betraying him to the police.

Lowe is out of work in regards to shuttling tiger cubs across the country, but he is still making money on Cameo, an app that lets fans to buy personalized messages from celebrities. According to Junkee, he charges about $150 per recording. He’s only sold about 34 people recordings thus far.

Lowe decided to try and drum up some more business, doing a Cameo-sponsored Reddit AMA. Some questions were sincere—but the vast majority of them were dedicated to absolutely dragging him.

Twitter user @ahgiles7 screenshot some of the best examples: 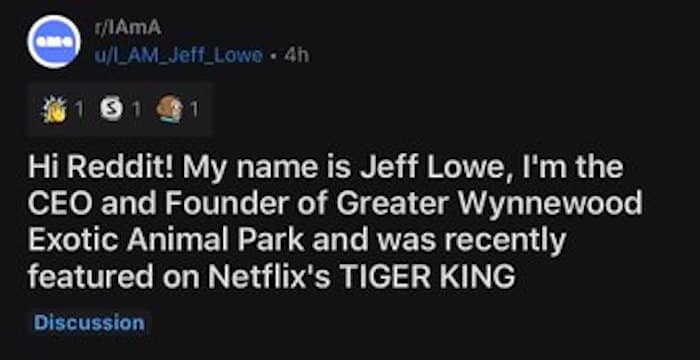 “As a senior citizen, why do you dress yourself like an anthropomorphized can of Monster Energy?”

“Yeah, I have a lot of questions. Number one: how dare you?”

“Why does he dress like a Hot Topic and Affliction had a baby with fetal alcohol syndrome?”

So did @stalinfan69 (what is that Twitter user name mean?? NOO!):

i haven’t seen tiger king and i probably wont but i love seeing dudes get annihilated by the internet, like jeff lowe here in the reddit ama pic.twitter.com/HsEXpR3GNa

It doesn’t seem like Lowe answered any of the roast questions, unfortunately, so the mystery of his fashion choices will go unanswered.