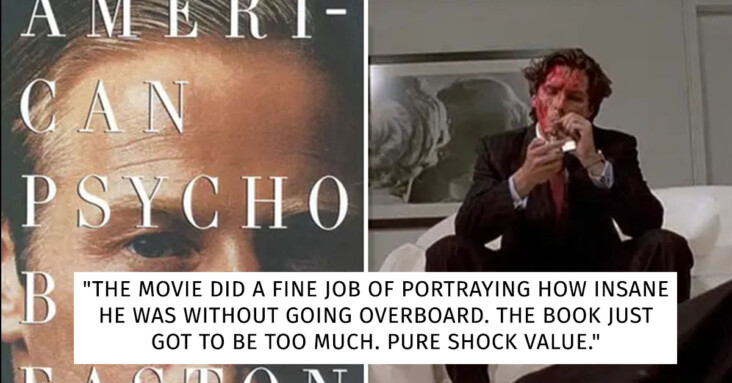 There is nothing worse than adoring a book, getting excited to see it get made into a movie, and the movie ends up being a huge disappointment to the book you loved. But what about movies that are better than the book they were based on? That feeling is absolutely unmatched.

People on Reddit are sharing their top picks for movies that are better than the book and all of their suggestions are pretty spot on.

Let’s just hope the big movie studios decide to remake some of the more disappointing book to movie adaptations so all of us book nerds can finally get some sleep.

“The title character was just a hell of a lot more likable in the film than in the book.”
—Bethlizardbreath

“It was part of a four-part novella released by Stephen King. The story was very short, but very well-written. I just feel like the movie really captured the spirit of the story better and gave some depth to the characters. Plus, the acting was great.”
—jonny_walkman

“I like the book, but the film is phenomenal.”
—TerryGAdkinson

“The movie was a million times better. The book had no scope.”
—garglebum

“The movie did a fine job of portraying how insane he was without going overboard. There were passages in the book that almost made me put it down and stop reading — it just got to be too much. Pure shock value.”
—xArbilx

“The movie explores the wondrous world of the father’s outrageous stories, whereas the book lacks all that lavish imagination. Instead, it’s just a bitter retelling from a spoiled child who thought his daddy didn’t love him enough.”
—cavaliereternally

“I don’t know if it was truly better, but damn, that movie did the book justice. One of my favorite childhood books and movies.”
—FBI_ICE_CREAM_TRUCK

“The movie created more suspense than I think was possible in the book. The build-up to the first time we see the T-Rex just wasn’t as intense on the page as it was on the screen.”
—The_mightiest_peanut

“Rachel McAdams brought flair and charisma to her character that just wasn’t in the book.”
—cleo1844

“They took a 36-page book children’s book and turned it into one of the greatest movies of all time.”
—krakrocks

“Everyone in the novel is a terrible person. Also, a lot of the tension in the film is removed in the book because the guys hunting the shark get to go home every night whereas, in the film, they’re on the boat the whole time.”
—MysteryGirlWhite

“Listen — while they were both utterly atrocious — I have to say the film was better than the book because you didn’t have to listen to her awful inner monologue.”
—Sarcastic-Me

“And this is coming from someone who really liked the short story. The movie was just better at telling that story overall.”
—GreatTragedy

“It was incredibly drawn out at times, and they were right to cut a lot of it out of the movie. The author also feels the need to describe the hell out of everything, and it gets tedious to read.”
—dcbluestar

“The novel was good, but the movie perfected the tone and — quite honestly — I thought Deckard was written better in the film.”
—mindfeces

“The book had a better ending, in my opinion, but it was written in such a bizarre style that it was a chore to read. Also, it’s a short book.”
—Driver_goon

“It was WAY better than Caging Skies. The book was so goddamn bleak that it probably wouldn’t have been adapted otherwise.”
—THACC-