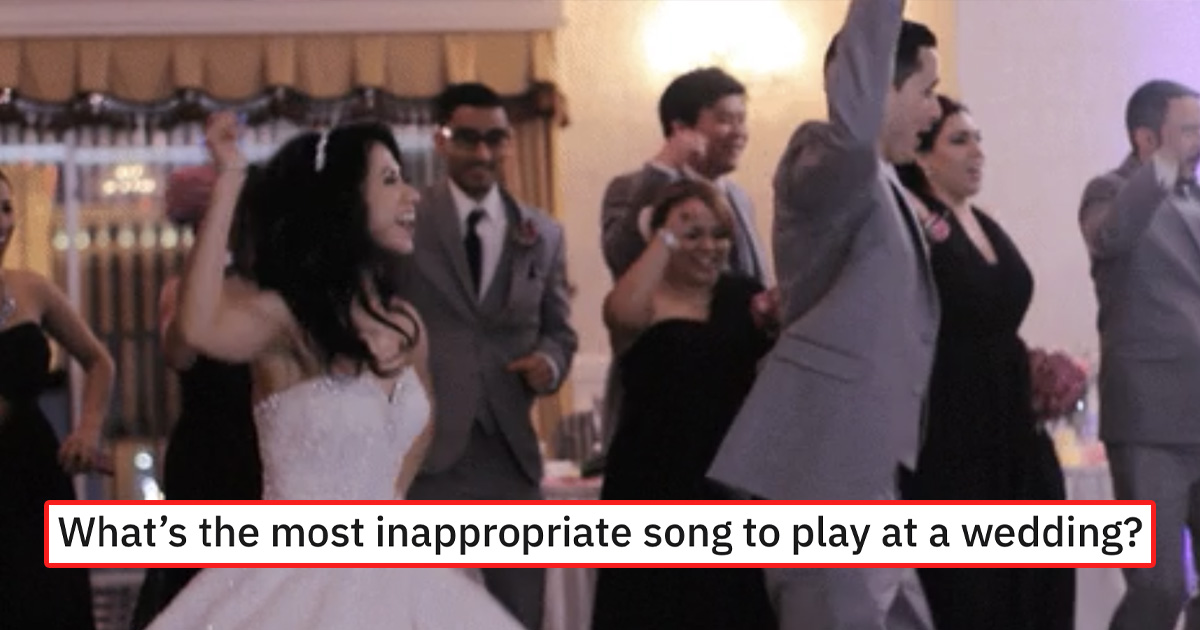 Weddings! Romantic, expensive AF, and definitely not the place to play some of these songs.

Thanks to u/combustion_assaulter‘s question on r/AskReddit:

“What’s the most inappropriate song to play at a wedding?”

I have an excellent list of things to request at my brothers’ weddings next year. Get ready, guys!

Love the One You’re With, Crosby, Stills, Nash, & Young.

I was part of a wedding that they used Say Something by A Great Big World when the bride was walking down the aisle. I was speechless. I don’t think anyone besides me and my wife noticed either.

In case you don’t know the song…

And I will swallow my pride
You’re the one that I love
And I’m saying goodbye
Say something, I’m giving up on you

It wasn’t me by shaggy.

4. Irony seems to be a theme

The End by the Doors

Still haven’t found what I’m looking for- U2.

I saw a couple play this at their wedding during the garter-finding thing. The groom kept pulling random shit like fuzzy socks and a McChicken out of the bride’s dress. While that song played. It was hilarious.

My dad actually played I Hate Everything About You by Three Days Grace at his second wedding.

Their divorce was finalized three days short of their one year anniversary.

I went to a wedding where the DJ played “Sexual Healing” during the Mother in law/son dance. It was glorious.

My mother wanted to play Josh Turner’s ” your man” for our mother/son dance. She didn’t see why we thought that was a bad idea.

Lips of an Angel – Hinder

Before He Cheats Song by Carrie Underwood

14. Just no to Meatloaf period

Paradise by the Dashboard Lights – Meatloaf

It was long ago, and it was far away/ And so much better than it is today.

The Rains of Castamere

One of the top posts at r/cringe used to be a bride singing this at her wedding. There were other families and children present. Fucking painful.

—as a joke my dad thought this would be a good idea to play when they renewed their vows.

Every Breath You Take by The Police. Even Sting thinks it’s a bad song for weddings.