The climactic finale of this week’s Game of Thrones featured a heart-pounding sequence where it looked like all our heroes were about to bite the dust and become wights under command of the Night King.

A lot of the episode was devoted to Jon Snow seemingly rolling around and grunting uselessly throughout the battle before getting pinned down by the zombie dragon.

Jon gets up from behind the rock, looks the dragon right in its undead eye and… shouts at it?

Folks on Twitter certainly thought it was an interesting choice of strategy.

us all watching jon and dany be useless for most of the battle #GameOfThrones #GOT #DEMTHRONES pic.twitter.com/X9UChxLx40

Jon and Dany while everyone out here dyin #GameofThrones #demthrones pic.twitter.com/JHEYpkfMQW

dany didnt even know how to pick up a sword the rught way and she still killed more white walkers than jon pic.twitter.com/VbfMf1GZmP 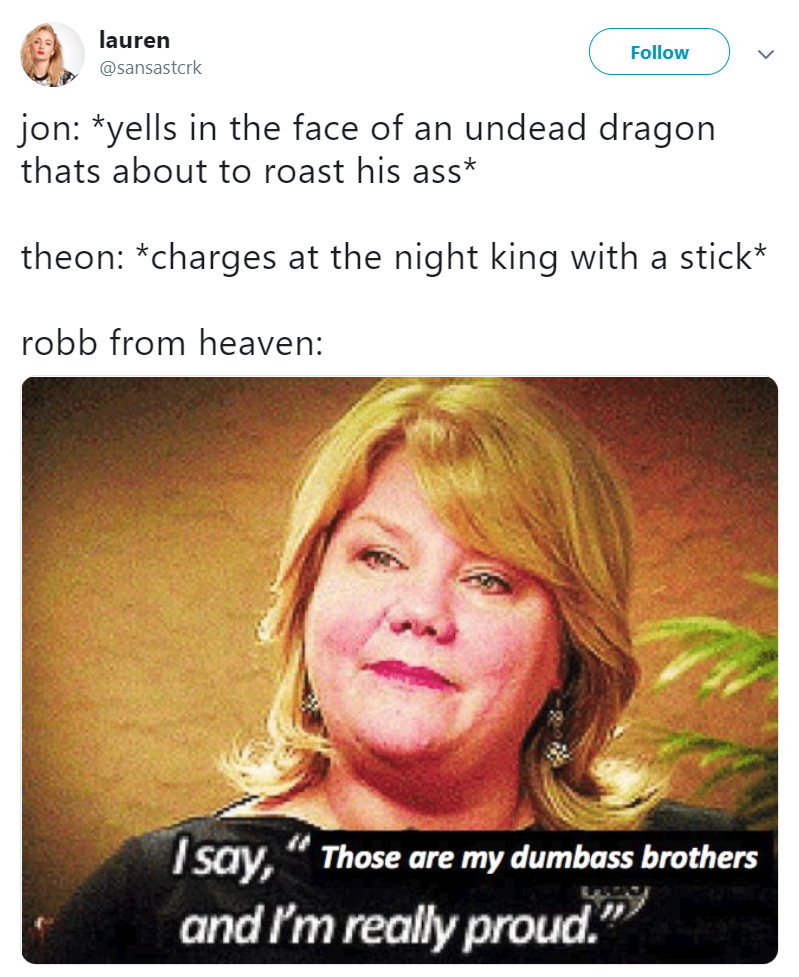 However, Arya wouldn’t have been able to kill The Night King without Jon’s actions.

A sharp-eyed fan on Reddit rewatched that sequence over again and noticed that Jon Snow wasn’t just screaming at a dragon for the fun of it. I’ll let u/Applesoapp explain:

“Jon screamed at the undead dragon to distract it so Arya can run past and kill the Night King. The undead dragon was protecting the entrance to the Godswood. Watch it again, you can actually hear him scream ‘GOOOOO – GO – GO.’ 10 seconds later the scene you can see the hair of a White Walker flying up when Arya sprints past the group of White Walkers. Jon once again was ready to sacrifice himself to kill the Night King.”

With that context in mind, Jon went from one of the most useless fighters in the battle to a runner-up for MVP and hands-down the player with the greatest number of assists in the game. But don’t take my word for it, watch for yourself.

It also appears that Jon squints his eyes and notices something around the 28-second mark (my money is on Arya). So, after spotting Arya, he decides to distract the dragon in the best, dumbest way he knows how by shouting “GOOOO! GO! GO!” at it and ushering Arya to quietly run up on The Night King and securing the win.

Again, Arya is absolutely, hands-down the most valuable player. However, it looks like everyone here owes Jon Snow a little apology.