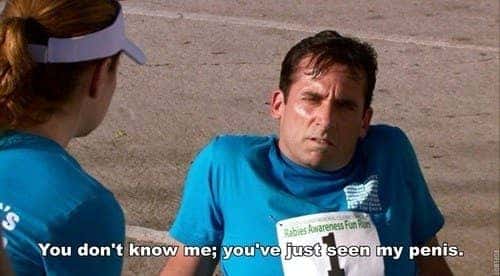 Unfortunately, The Office is no longer on Netflix, and the only place you Dunderheads will be able to get your fix will be on Peacock (NBC’s streaming service), Comedy Central re-runs, and this list of the funniest “The Office” quotes of all time.

Of those three options, only this list is 100% free, so we highly recommend it. (But if you are willing to pay, Peacock has a pretty good deal here.)

Now, chances are you already have most of these lines memorized, but there are at least 50 you don’t, or completely forgot about.

From Angela to Michael to Dwight and everyone in between, we hope this funny collection of The Office quotes brings some laughter and joy to your day, and helps tide you over until NBC lets Netflix start running the office again.

1. “Would I rather be feared or loved? Easy. Both. I want people to be afraid of how much they love me.” – Michael Scott

4. “Look, it doesn’t take a genius to know that every organization thrives when it has two leaders. Go ahead, name a country that doesn’t have two presidents. A boat that sets sail without two captains. Where would Catholicism be without the popes?” – Oscar Martinez

5. “You know what they say about a car wreck, where it’s so awful you can’t look away? The Dundies are like a car wreck that you want to look away from but you have to stare at it because your boss is making you.” – Pam Beesley

7. “I never thought I’d say this, but I think I ate too much bone marrow.” — Dwight Schrute

8. “I don’t care what they say about me. I just want to eat. Which I realize is a lot to ask for. At a dinner party.” – Pam Beesley

9. “My roommate wants to meet everybody. Because I’m pretty sure he thinks I’m making Dwight up. He is very real.” – Jim Halpert

10. “Sometimes I’ll start a sentence and I don’t even know where it’s going. I just hope I find it along the way.” – Michael Scott

12. “Powerpoints are the peacocks of the business world; all show, no meat.” — Dwight Schrute

13. “I’m not superstitious, but I am a little stitious.” – Michael Scott

15. “Yes, I have a dream, and it’s not some MLK dream for equality. I want to own a decommissioned lighthouse. And I want to live at the top. And nobody knows I live there. And there’s a button that I can press, and launch that lighthouse into space.” – Stanley Hudson

16. “I wanna do a cartwheel. But real casual-like. Not enough to make a big deal out of it, but I know everyone saw it. One stunning, gorgeous cartwheel.” – Creed Bratton

18. “I’ve been involved in a number of cults, both a leader and a follower. You have more fun as a follower, but you make more money as a leader.” – Creed Bratton

19. “I guess I’ve been working so hard, I forgot what it’s like to be hardly working.” — Michael Scott

20. “I’m guessing Angela is the one in the neighborhood that gives the trick-or-treaters toothbrushes. Pennies. Walnuts.” – Pam Beesley

21. “Guess what, I have flaws. What are they? Oh I don’t know. I sing in the shower. Sometimes I spend too much time volunteering. Occasionally I’ll hit somebody with my car. So sue me.” — Michael Scott

23. “I am running away from my responsibilities. And it feels good.” – Michael Scott

24. “I want you to rub butter on my foot…Pam, please? I have Country Crock.” — Michael Scott

26. “Sometimes I get so bored I just want to scream, and then sometimes I actually do scream. I just sort of feel out what the situation calls for.” — Kelly Kapoor

27. “If I were buying my coffin, I would get one with thicker walls so you couldn’t hear the other dead people.” – Dwight Schrute

33. “I’m fast. To give you a reference point. I’m somewhere between a snake and a mongoose. And a panther.” — Dwight Schrute

34. “I’m always thinking one step ahead, like a carpenter that makes stairs.” — Andy Bernard

35. “I think it’s great that the company’s making a commercial, because not very many people have heard of us. I mean, when I tell people I work at Dunder Mifflin, they think that we sell mufflers or muffins or mittens or…and frankly, all of those sound better than paper, so I let it slide.” — Jim Halpert

36. “Last year, Creed asked me how to set up a blog. Wanting to protect the world from being exposed to Creed’s brain, I opened up a Word document on his computer and put an address at the top. I’ve read some of it. Even for the Internet, it’s… pretty shocking.” – Ryan Howard

37. “It’s a real shame because studies have shown that more information gets passed through water cooler gossip than through official memos. Which puts me at a disadvantage because I bring my own water to work.” — Dwight Schrute

38. “I kinda know what it’s like to be in commercials. My nickname in high school used to be Kool-Aid Man.” — Kevin Malone

40. “Stanley just drank OJ out of my mug, and didn’t seem to realize that it wasn’t his hot coffee. So the question has to be asked, is there no limit to what he won’t notice?” — Jim Halpert

41. “I am about to do something very bold in this job that I’ve never done before: try.” — Jim Halpert

42. “If I can’t scuba, then what’s this all been about? What am I working toward?” – Creed Bratton

44. “Should have burned this place down when I had the chance.” — Michael Scott

47. “You only live once? False. You live every day. You only die once.” — Dwight Schrute

48. “For my new year’s resolution, I gave up drinking… during the week.” — Meredith Palmer

49. “One day Michael came in and complained about a speed bump on the highway. I wonder who he ran over then.” — Jim Halpert

50. “Whenever I’m about to do something, I think, ‘Would an idiot do that?’ and if they would, I do not do that thing.” — Dwight Schrute

51. “It takes an advanced sense of humor. I don’t expect everybody to understand.” — Michael Scott

55. “I love my employees even though I hit one of you with my car.” — Michael Scott

57. “I wish there was a way to know you’re in the good old days before you’ve actually left them.” — Andy Bernard

59. “From time to time I send Dwight faxes. From himself. From the future.” — Jim Halpert

60. “Andy Bernard does not lose contests. He wins them. Or he quits them. Because they’re unfair.” — Andy Bernard

63. “Oh so Dwight gave me this wooden mallard as a gift. I found a recording device in it. Yes. So. I think if I play it just right, I can get Dwight to live out the plot of National Treasure.” — Jim Halpert

64. “You know, I thought this was an office, not the thunderdome.” — Clark Greene

65. “In high school, I organized a walk out over standardized testing. Got over 500 students to just skip the SATs. At the last second I chickened out, took it anyway got a twelve twenty. Always regretted it… I feel lachrymose.” — Andy Bernard

66. “My last job was at a Taco Bell Express. But then it became a full Taco Bell and, I don’t know, I couldn’t keep up.” — Erin Hannon

68. “Most people don’t even know that a candy cane represents a shepherd’s crook. Which I assure you does not taste like peppermint. It tastes like sheep feces.” – Dwight Schrute

69. “I have one simple philosophy in business: if the seat is open, the job is open. It’s how I came to briefly race a Formula One car. The three slowest laps ever recorded.” — Nellie Bertram

71. “It just occurred to me that Andy has been calling me Plop for so long, he forgot my real name. Which is Pete.” — Pete Miller

74. “I work hard all day. I like knowing that there’s going to be a break. Most days I just sit and wait for the break.” – Kevin Malone

77. “I have been trying to get on jury duty every year since I was 18 years old. To get and go sit in an air-conditioned room, downtown, judging people, while my lunch was paid for. That is the life.” – Stanley Hudson

80. “In the Schrute family, the youngest child raises the others. I’ve been raising children since I was a baby.” – Dwight Schrute

81. “I feel like all my kids grew up, and then they married each other. It’s every parent’s dream.” – Michael Scott

82. “I would say I kind of have an unfair advantage, because I watch reality dating shows like a hawk, and I learn. I absorb information from the strategies of the winners and the losers. Actually, I probably learn more from the losers.” — Michael Scott

85. “Close your mouth, sweetie. You look like a trout.” — Phyllis Lapin-Vance

86. “I wake up every morning in a bed that’s too small, drive my daughter to a school that’s too expensive, and then I go to work to a job for which I get paid too little. But on pretzel day? Well, I like pretzel day.” — Stanley Hudson

88. “Any man who says he totally understands women is a fool. Because they are un-understandable.” — Michael Scott

89. “There’s a lot of beauty in ordinary things. Isn’t that kind of the point?” — Pam Beesly

90. “I’ve got a golden-ticket idea. Why don’t you skip on up to the roof and jump off?” — Stanley Hudson

91. “There are always a million reasons not to do something” — Jan Levinson

92. “It’s a real shame because studies have shown that more information gets passed through water cooler gossip than through official memos. Which puts me at a disadvantage because I bring my own water to work.” — Dwight Schrute

93. “Jim told me you could buy gay-dar online.” — Dwight Schrute

94. Toby: We should really have the office’s air quality tested. We have radon coming from below. We have asbestos in the ceilings. These are silent killers.
Michael: You are the silent killer. Go back to the annex.
Toby: You’ll see.

95. Toby: Hey Michael, I have an extra twin bed if you want.
Michael: You are going to be sleeping by yourself for the rest of your life so you should just get used to it.

96. Toby: Didn’t you lose a lot of money on that other investment, the one from that e-mail?
Michael: You know what, Toby? When the son of the deposed King of Nigeria e-mails you directly asking for help, you help. His father ran the freaking country, okay?

97. Toby: Actually, I didn’t think it was appropriate to invite children, since it’s uh, you know, there’s gambling and alcohol, it’s in our dangerous warehouse, it’s a school night, and you know, Hooter’s is catering, and is that- is that enough? Should I keep going?
Michael: Why are you the way that you are? Honestly, every time I try to do something fun, or exciting, you make it… not that way. I hate… so much about the things that you choose to be.

98. “Who’s the one who didn’t bring lice into the office? Meredith. Sure I gave everybody pink eye once, and my ex keyed a few of their cars, and yeah I BMed in the shredder on New Years. But I didn’t bring the lice in. That was all Pam.” — Meredith

99. “You’re the people’s princess! Diana was nothing!” — Meredith

If you enjoyed this collection of funny The Office quotes, you may or may not also enjoy these links: