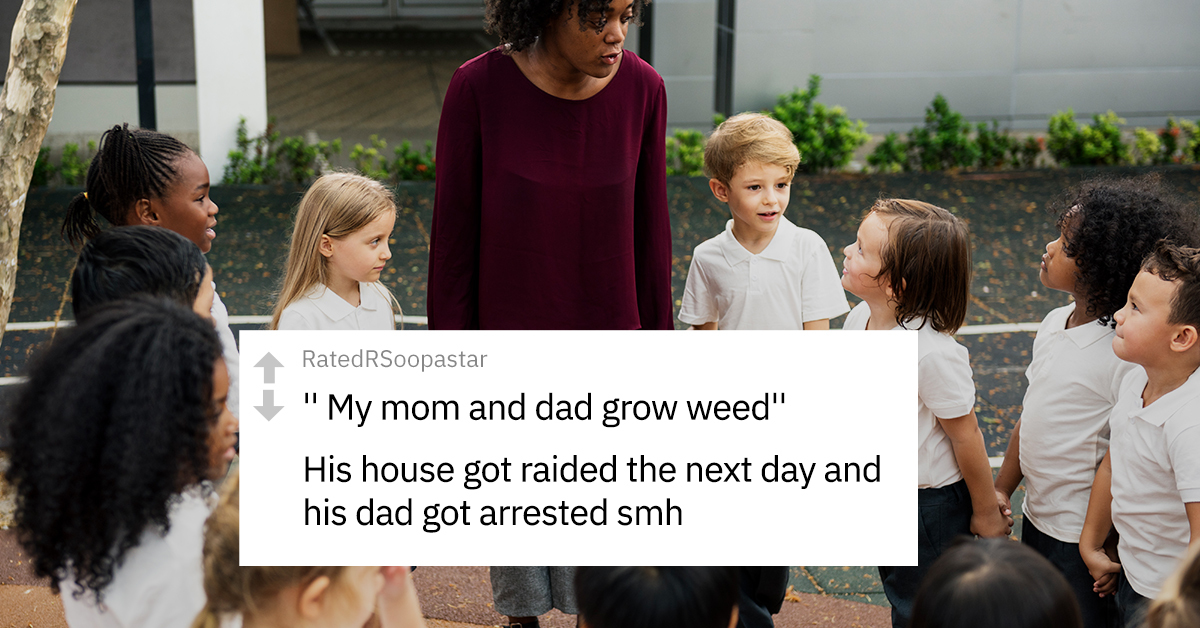 Being a teacher seems to unbelievably hard even under the best of circumstances. Not only are you trying to impart knowledge that the kids must retain and accurately use during state and federally mandated tests, you also have to manage a bunch of different personalities. And kids’ minds are really wild, sort of like adults at Burning Man, but all the time.

Today, we are getting a sneak peek into the weirdness that comes out of their mouths because Redditor u/Kriss0509 posted on r/AskReddit, with this question: “Teachers of Reddit, what’s the weirdest thing a student answered to ‘tell me a fun fact about yourself?'”

Teachers as well as students who have had the words of their fellow students burned into their brains forever chimed in. The stories of these stories both make me want to be a teacher and make me never want to talk to anyone under the age of 25 ever again.  Please pay teachers all the money for navigating the mental landscapes of children while also teaching fractions.

I teach middle school, This one still takes the cake.

That his mom and dad have the same parents. I asked him to clarify because I didn’t understand what he was saying and he said “I only have one set of grandparents, they had the same parents” I quickly moved to the next student so no one else would realize that this kid just told the class that his parents were siblings…

I talked to him about it the next day in private and he said that he got it mixed up, his parents don’t have the exact same parents, they shared a dad… I felt so much better when the mom called me to let me know her elderly step-father married her husband’s elderly mother. still weird, but much better. —woffdaddy

I had a student tell me that sometimes his dad got drunk and asked his mom for things; as I was starting to tell him he didn’t need to elaborate any further, he continued with “like soup and he yells it like ‘soooooooooup’” it took every bit of restraint to not laugh. It’s been years and years since that happened but I still laugh when I think about it. —chrissiwit

“My arm is F—CKED y’all” in the deepest southern drawl and proceeded to wildly swing his “f—ked” up arm around. He was 12, had Erb’s palsy and also got detention that day. He might be one of my fav students —JokerzPrincezz

Student told me that there is a chapter dedicated to him in a dental surgery textbook because of a very rare disorder that he had as a child. I may still have that essay —MadWhiskeyGrin

A student, not a teacher, but once we were going around a circle during percussion camp in the front ensemble and my teacher goes “hello everyone, my name is ____ and I have sh—t my pants as an adult.” Definitely one of the weirder ones I’ve heard. —iiinnkk

During french class, A guy in my class said that he liked stabbing children. He meant that he fences but didn’t know the exact translation for that. —Muffin141

I was an ESL teacher in Indonesia and a student once told me every morning she cleaned the sh—t on her bed. I asked her to clarify, worried she had a serious digestive issue. She answered: “I brush my teeth, wash face and clean bed sh—t.” Bed sheet. —GuruBagus

Not a teacher, but I was a helper in a middle school classroom. A young girl, who seemed uninterested, said, with no hesitation, that she can chug an entire bottle of beer. She got expelled later that year for keeping drugs in her locker. —ThatGirlNo1Knows

I teach ESL and every lesson we start the class by sharing something good that happened to us over the last week or so. Needless to say, kids share the most random things ever. I have many weird stories because of that. We enforce a rule that they need to share good things so they don’t start one upping each other over whose grandma had the worst death lol

One day, a student said: “I was riding my bike over the weekend when I fell.”, I could see where it was going but didn’t have enough time to enforce the rule when he just spat out: “I fell over a wired fence and cut my neck, it just kept gushing blood, a lot of blood.”. I reminded him that we were only sharing good news when he said: “It’s good because I’m still alive.”. I had a good laugh and agreed but the damage was done, every kid after him wanted to share about the most horrific injury they had or witnessed. —ButNowWeSaidIt