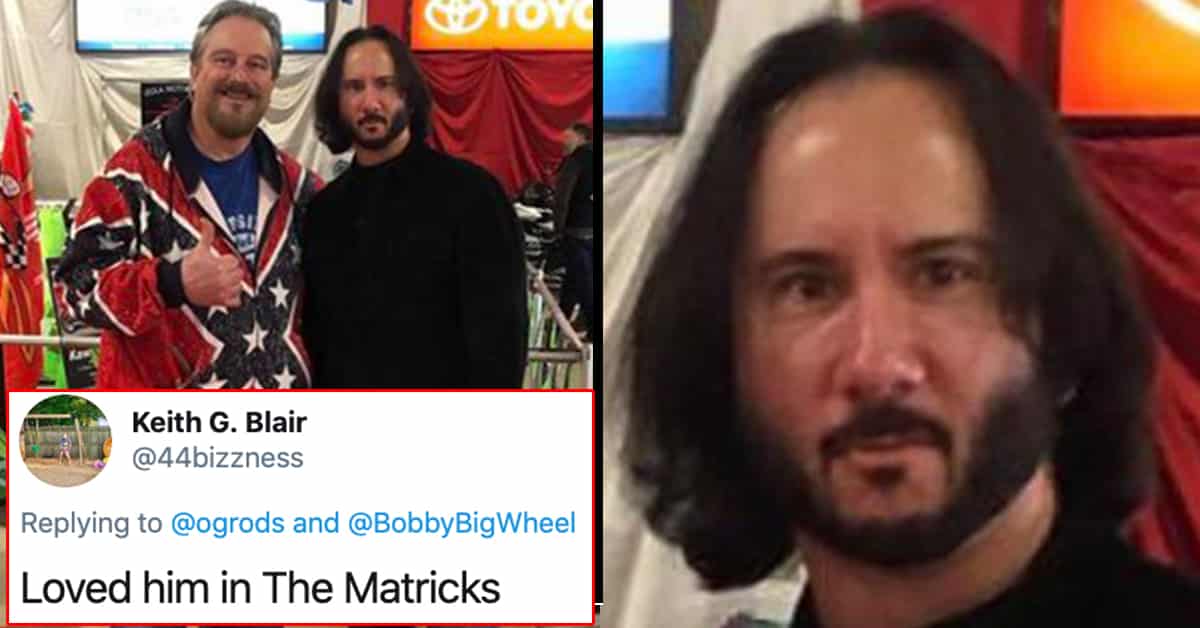 Actor Keanu Reeves is so beloved by America that his popularity crosses political divides. A Donald Trump supporter posted some pics of himself posing with Reeves, delightfully announcing that The Matrix star is a MAGA man, too. The only problem is that it’s not Reeves. What we have here is an imposter!

Screenshots of the man’s post have been circulating on Twitter, but they went especially viral with a tweet from writer Zaki Hasan, who captioned the images, “Who wants to tell him?”

In the original post, the Trump supporter wrote, “Maryland Bike show this past weekend with Keanu. Apparently he restores antique bikes and is a Trump supporter!”

Then he tagged the unfortunate Cheryl Putnam, who probably took the pic. Was she fooled? Or snickering behind the camera?

The zoomed in picture is hilarious for a few reasons. One: it is so obviously not Keanu Reeves. Two: it’s so close to being Keanu Reeves. The man’s hair, clothes, and weirdly distant vacant expression is very reminiscent of Reeves, and you have to wonder if he loves to deliberately fool people and works on this impression.

Or was the man who met him just very confused? Did Fake Keanu introduce himself as Real Keanu, or did he just not correct the assumption?

It’s just so completely absurd and yet believable that this man would think this guy was Reeves. People were ROTFL:

The comments on that post are the best! pic.twitter.com/IICY5kTSlt

Mom can we get Keanu Reeves?

Mom: We have Keanu Reeves at home

The Keanu Reeves at home: pic.twitter.com/vUGXCdsaqI

And we thought Rob Lowe with cable was bad…. pic.twitter.com/DWDPVpCwNw

But that’s the real Keanu tho? pic.twitter.com/2YNSL87IA4

You’d have to be a trump supporter to think that’s Keanu.

I have been laughing at this for way too long. https://t.co/VEfTqSCTqZ

Adam looks like someone tried to draw Keanu from memory.

And now a guy named Nick German is claiming to be the imposter on Facebook, and he seemed to imply that he in no way led the man to think he was Reeves or a Trump fan.

He wrote over an article about the viral photos, “Ok – this is insane. Some jerk took my photo last weekend at the Timonium Bike Show and now posting on Instagram that he met Keanu Reeves. Jesus. Really people???? Yes, that is ME on the right. What is wrong with people? And it received IG 250,000 hits. Smh.”

Even funnier, Business Insider reports that Reeves DOES build motorbikes, so maybe he has popped up at shows like this from time to time, shaking hands and kissing babies. Here he is doing a video for GQ on the subject:

Once you see the real thing, you can’t go back.