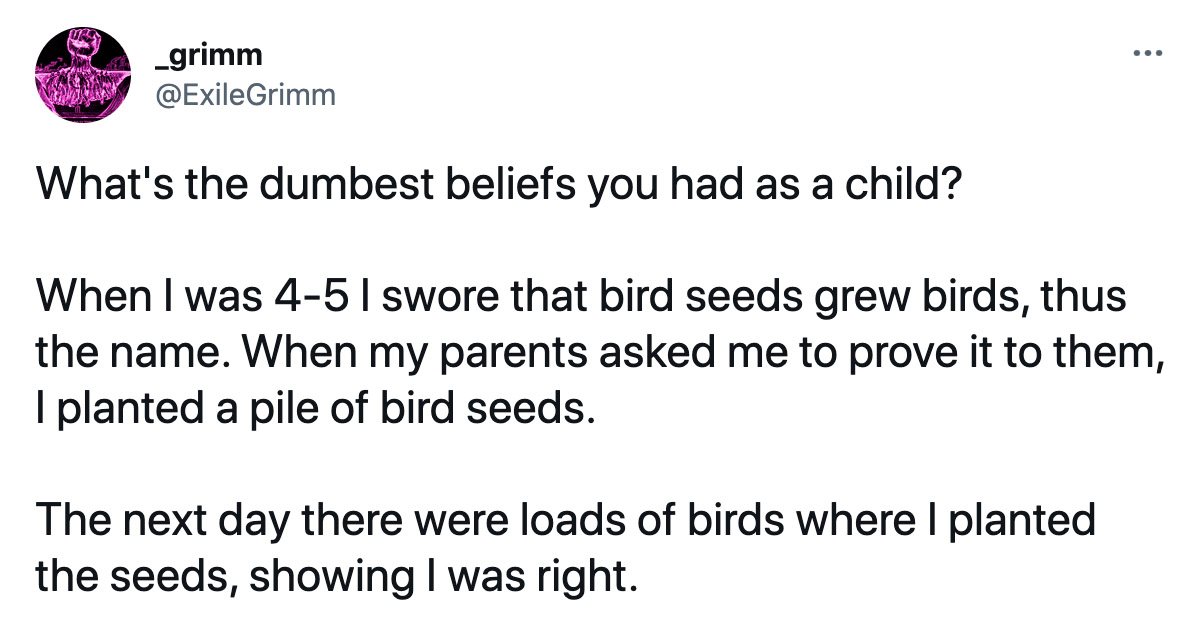 Everybody loves children, or can at least admit that they can be cute sometimes, but there’s no denying that little kids can be rather gullible, convinced as they are that adults know everything and would never lie to them.

They also have active imaginations, and when your brain is still rapidly developing, it can be hard to remember what’s real and what’s something you assumed, saw in a dream, or watched in a kid’s show and didn’t know it was a joke.

One such former kid went on Twitter this week to ask everyone to share the dumbest of the beliefs they held as children, possibly to help them feel better after sharing their own embarrassing story.

“When I was 4-5 I swore that bird seeds grew birds, thus the name. When my parents asked me to prove it to them, I planted a pile of bird seeds,” they wrote. “The next day there were loads of birds where I planted the seeds, showing I was right.”

“I wondered why my parents still objected to this idea after I proved it worked, so I thought they were hiding this secret from me because they were worried I’d grow a massive flock of birds and they’d not be able to tell me what to do.”

These days, parents can just show their kids videos of birds hatching from eggs and growing up to eat bird seeds. However, based on many of the responses people provided, there’s still a serious problem with parents and other adults telling kids little fibs in order to get them to behave better or even just leave their snack supplies alone and those kids growing up to realize that they were being stupid for years.

And by “problem,” we mean the perfect setup for a list of funny stories