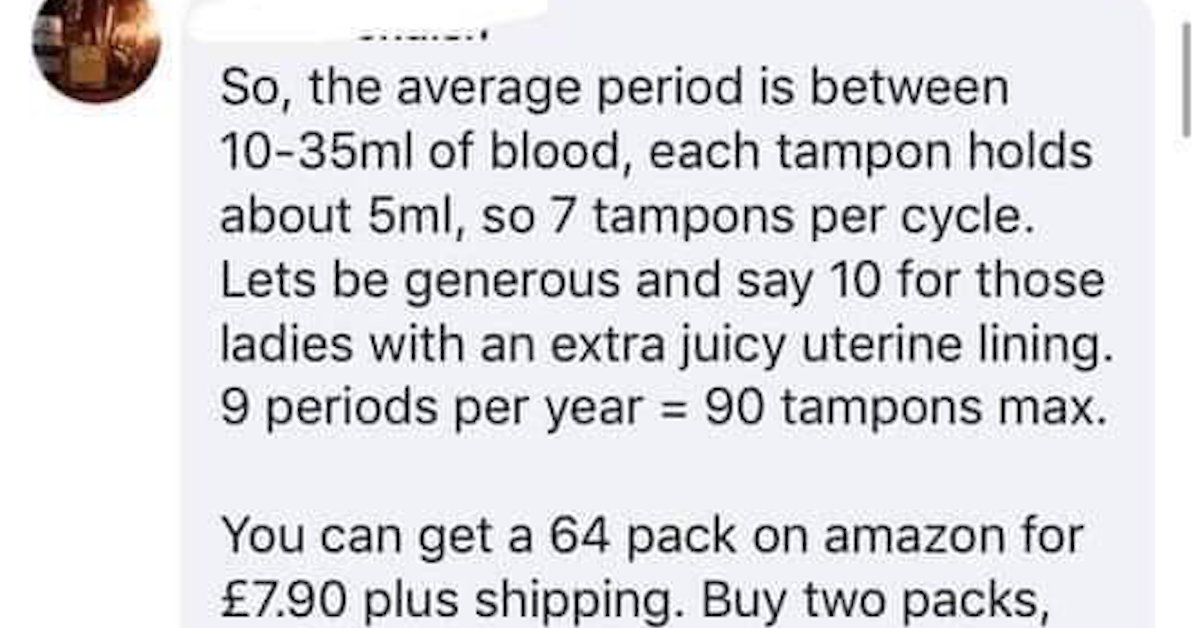 Men don’t typically menstruate, so unless they’re doctors, or extremely familiar with the inner workings of a woman’s body, there’s really no reason they’d know the little ins and outs of menstruation. They might get the general gist, but be lost with the specifics.

Like, take for example the time that NASA was preparing for Sally Ride’s first spaceflight in 1983: engineers were trying to figure out how many tampons she’d need for a one-week mission, and they asked if 100 would be “the right number.” Her response: “That would not be the right number.” One hundred tampons. For a week. (To be clear, 100 is a lot of tampons. She told them they could cut that number in half.)

So yeah, it’s not something that anyone who doesn’t actually menstruate would know much about. BUT that doesn’t mean that was going to stop a guy from explaining the process and all its details to other women. I mean, we are talking about men here. Mansplaining got its name for a reason.

An unidentified man posted some information on the internet that was screenshotted and shared on Twitter. He wrote, “So, the average period is between 10-35ml  of blood, each tampon holds about 5ml, so 7 tampons per cycle. Let’s be generous and say 10 for those ladies with an extra juicy uterine lining [emphasis mine, SORRY]. 9 periods per year = 90 tampons max.”

Look at this fucking dweeb pic.twitter.com/2QFqNuqvZz

He also included information on where said tampons could be purchased (so helpful!): “You can get a 64 pack on amazon for £7.90 plus shipping. Buy two packs, save on shipping and have 128 tampon for the year, thats about £20 here or their for a year’s periods.”

He ended by writing, “Cut down on your starbucks venti frapps and stop whining. This isn’t a first world problem.”

WELL. Let’s just say there a few issues here, as pointed out by the responses to the tweet. Like, first of all, where did 9 periods a year come from?

Does he think that a period goes on a holiday? Like it’s getting to Christmas, time for a trip to Mexico. Like it’s an employee

Wait….I think I solved it….does this guy think….women only have periods 9 months of a year….because that's how long pregnancy lasts?

And, sorry, how many tampons per cycle? Seven?

But aside from how many cycles a person has a year, and how many tampons are used during each cycle, at least he got the part about the amount of juicy uterine lining being shed, right? Hahaha, of course he didn’t.

The average number is 35ml-45ml. So literally the only thing he got right was how many days are in a week.

Here’s a great breakdown of the whole thing, for real.

Also, $50 a year isn’t a walk in the park for everyone to come up with.

there are tons of people who can’t afford to spend 50 bucks a year. even if they can afford it, period-related items shouldn’t be treated like just regular ol’ products.

One good thing about the mansplaining tweet, besides the fact that it brought women together to laugh at him, is that the idea of switching to a menstrual cup came up.

Menstrual cups are so great! The only problem is that there are many women around the world who don’t have access to what they need to properly clean it. And using it without disinfecting it can lead to serious illness:( So disposable products can be the best option for them:)

But, unfortunately, not everyone is able to use them.

They’re also not an option for women with limited mobility and other disabilities. I wish people would remember this when effusing about how every woman needs to switch to a cup to save the planet.

And hey, if it’s a choice between tampons and coffee, at least one woman chooses coffee.

Coffee or tampons? That’s the choice? Ok, I choose coffee. He’d better hope he doesn’t sit in my seat when I get off the bus

Well, at least getting roasted so hard online by so many people will teach this man a thing or two about spouting off about things he’s not actually knowledgeable about. Just kidding! Fat chance.