I think we can all agree that millennials are just the worst. We feel entitled to every little luxury like access to public health care and having a roof over our heads—who do we think we are?

Ask any Baby Boomer you can find. Millennials are lazy, self-centered, and we put perfectly good establishments like JC Penny’s and Office Depot at risk. How our generation has fallen so far from the tree is beyond me.

These are just a few of the many indisputable reasons why millennials are the worst.

2. They have no idea how to save money. 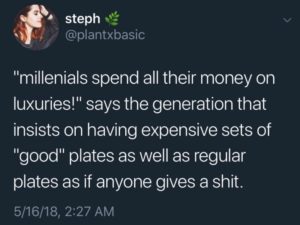 4. Everything comes so easy to them.

6. Millennials are way too sensitive.

“This generation can’t take a joke”

7. They spend too much money on brunch.

Maybe if millennials spent less on brunch and more on particle physics research they could travel to 1974 and afford a house. Just a thought

9. They have little to no aspirations.

i love how babyboomers dreamt of being millionaires & the millennial dream is 2 hve a 1 bed apartment&not 2 drown bc of the ice caps melting pic.twitter.com/FzBnGvnxJQ

10. These youngsters don’t even have diamonds.

Too busy filling out job applications that ask them to attach their resume and then enter what’s on that same resume on the next page. https://t.co/94XmGcxUWj

11. Their sense of style is questionable at best.

12. They have no self-control when it comes to spending.

This dude got his start by borrowing $34,000 off his grandfather yet he wants to lecture others about their spending habits. Okay dude https://t.co/hWu4o6wjiz

14. And they’re destroying our favorite stores.

If I had a dollar for every time a BabyBoomer complained about my generation, I’d have enough money to buy a house in the market they ruined

baby boomer: why r there holes in ur jeans? u rip those urself?

me (smart & woke): why r there holes in the ozone? u rip those urself?

#HowToConfuseAMillennial Crash their economy and then condescendingly ask why so many of them are living with their parents.

Baby boomers talk a lotta shit for a generation that always needs help connecting to the wifi.