Wedding-shaming is definitely a thing, but it’s usually directed at the people throwing the wedding, not the guests. Not in this case, though—in this case, the object of the shaming was a guest (not an invited one, someone else’s plus one) who showed up with TEN empty Tupperware containers and left with those same Tupperware containers full of food and dessert. Nope, not kidding.

The story is so unbelievable that it went hugely viral after the bride posted it on Facebook. I mean, seriously. Can you even imagine? WHO WOULD DO THAT?

In her post, the woman explained that she had a very small wedding ceremony and reception, estimating that about 25 people were invited. She invited a friend of her father’s, and when he asked if he could bring his daughter and her husband, the bride had no problem with it. That’s exceptionally chill of the bride to begin with.

But when the woman showed up, sans the husband, she literally brought empty Tupperware containers with her. She went to town at the wedding’s buffet-style dinner set-up, filling up about seven of the containers. Then she turned her sights to the dessert table, taking three full containers worth of homemade cookies. But wait, that’s not all! She also took a few bottles of beer and MOST OF THE CENTERPIECES.

She wrote that she didn’t see any of this happening but her father told her about the next day.

And then, to top it all off, the gift from the food-stealing guest was…womp womp…literally a five-dollar bill. 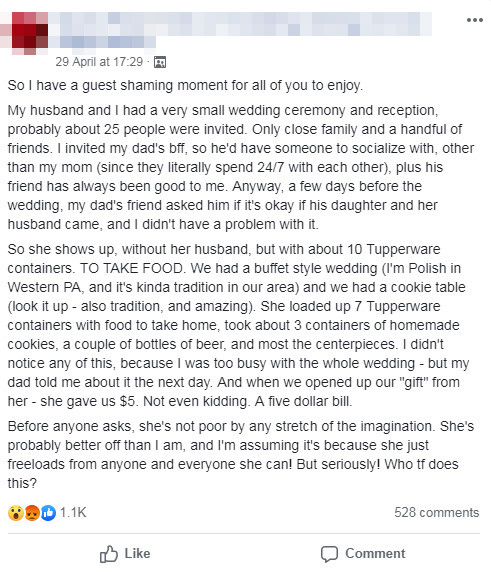 The comments on Facebook were from other people astounded that anybody could possibly be this rude. 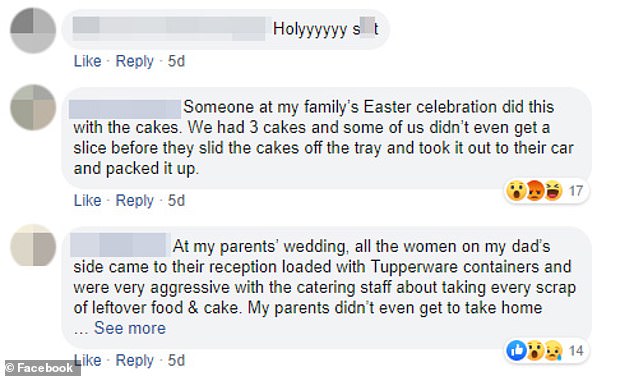 One person said that someone straight up took the cakes at their family Easter celebration. 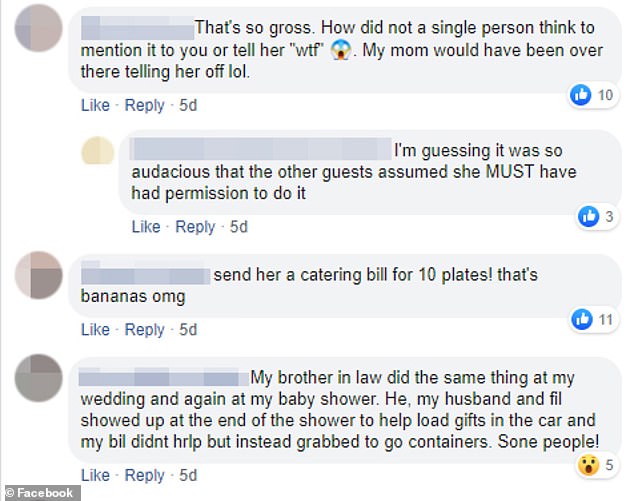 The post ended up being posted on the “Trashy” subreddit, where the comments were along the same lines.

People shared their own incredible story of food-snatching relatives.

Went to my first “birthday dinner” with my wife’s side of the family. We all got a pre warning that (cousin) was going to show up with their 7 kids and eat and leave. They show up and all 7 kids and the mother and father eat the entire cake as we are all in the living room talking. They all come sit down with huge plates of food and finish eating before anyone else had even touched food they were gone. As well as all of the food and the cake. I offered to order pizza and my wife’s dad said they were probably staying nearby and would come back soon assuming everyone was going to want to eat and come take all of the food again so not to worry about it. We went out to a restaurant that night and they showed up ate off our bill and left before we could even talk to them. I felt bad for the kids and wanted to make sure they ate so it wasn’t a big deal but the parents were some of the rudest most entitled people I’ve ever met. They pull up in a brand new Hummer and eat 2 full housefuls of food and left no gifts for my wife other than the stained chocolate cake that still blesses the floor to this very day.—rmoney1269

A couple thanksgivings ago, my wife and I invited her family over. We spent around $500 on food, wine, beer, desserts, etc, We laid out a serious spread-turkey, ham, tons of veggies, appetizers…it was a feast. Everyone ate and then my wife’s sister literally took all of our large Tupperware dishes from the cupboard and took almost all of our leftovers after my wife suggested she take some food home. She literally didn’t leave enough for even one meal for us. Their mom even commented about it and she replied “hey they said take some food home so I’m taking some food home.”

The really bad part is, she alone makes more money than my wife and I combined.—el_kowshka_es_diablo

This is very strange and inappropriate behavior. Of course we all WANT to fill up Tupperware containers with delicious home-made cookies at parties and weddings, but we don’t do it! We just slip a few in our pockets and call it a day.