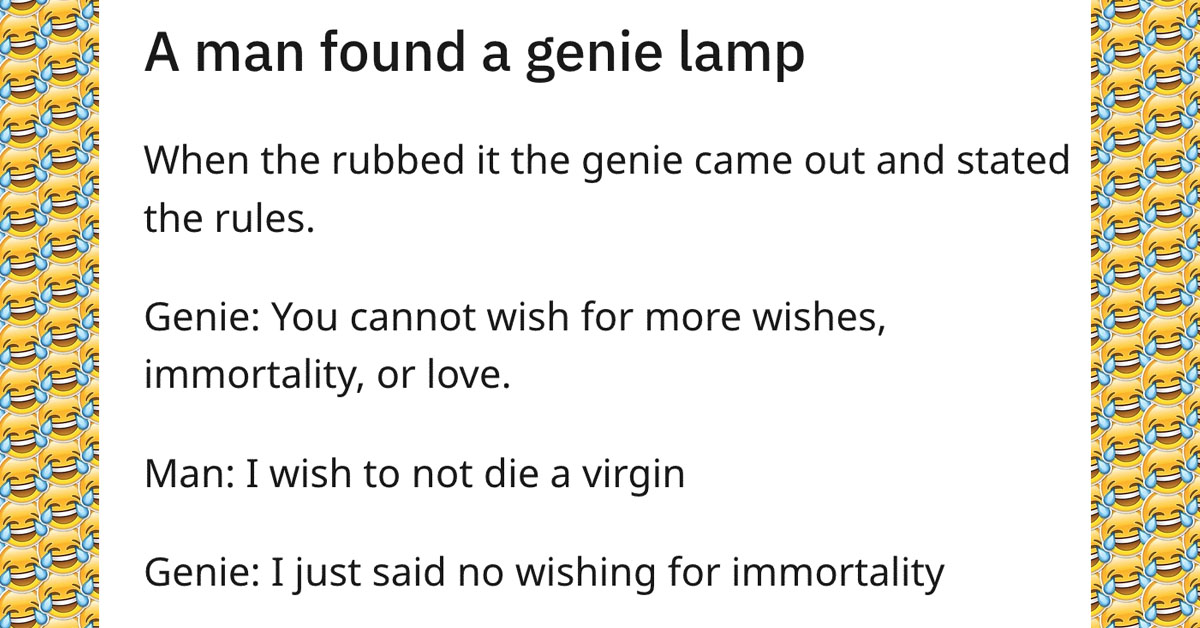 Jokes come in many flavors and, like with chocolate, some prefer their jokes dark. Very dark.

This type of dark humor isn’t sanitized, safe, or socially acceptable. In fact, in this genre, the more offensive a joke is, the better.

For these deviants, we created this list of dark jokes.

Some of these quips traffic in humor that is “morbid” and that intentionally jokes about topics normally considered taboo including violence, abuse, and death.

So be warned: These are the kinds of dark jokes go right up to the line of bad taste and others pole-vault right over it.

Light a man on fire and he’ll be warm for the rest of his life.

2. What’s the difference between a hockey player and a hippie chick?

The hockey player changes his pads after three periods.

When he rubbed it the genie came out and stated the rules.

Genie: You cannot wish for more wishes, immortality, or love

Man: I wish to not die a virgin

Genie: I just said no wishing for immortality

4. What happened after Kurt Cobain shot himself? 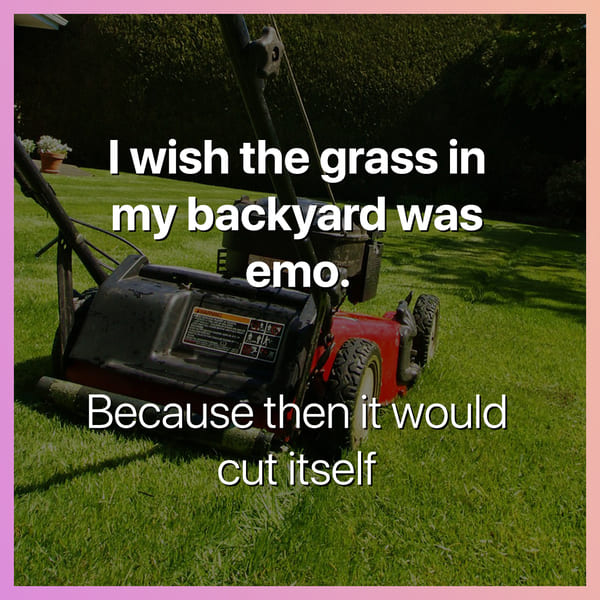 6. Why is six afraid of seven?

Because seven is a registered six offender.

8. My mother said one man’s trash is another man’s treasure 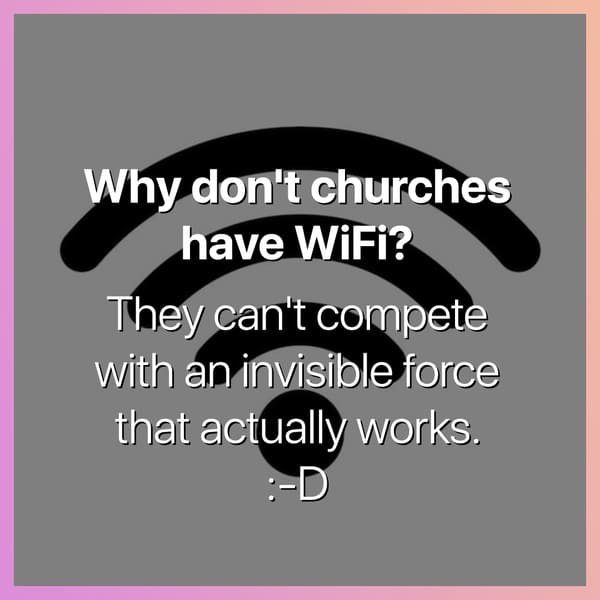 Cracking open a cold one with the boys

12. A child molester and a priest walk into a bar…

He orders a drink

…except at a funeral.

14. Why was the anti-vaxxer’s 4-year-old child crying? 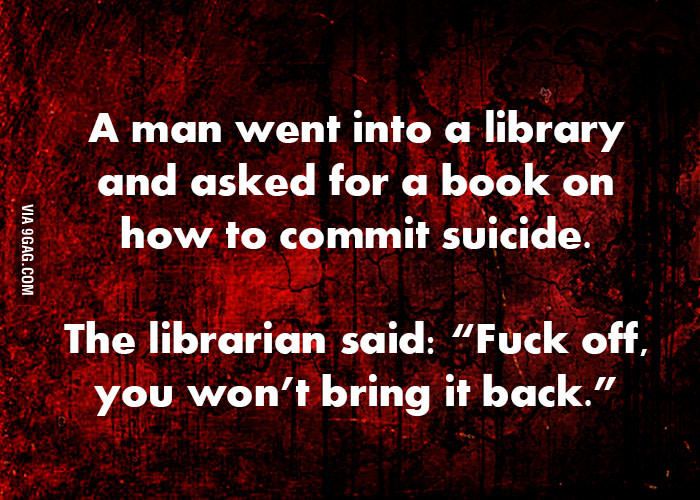 16. What starts with an M and ends with arriage?

The joke never gets old, and neither does the baby.

It’s where I flip your MOM over

“Mike the mailman? But he could be your father!”

“Sweetheart, I don’t think you understood.”

19. Why are so many Americans stupid?

Cuz they shoot the ones that go to school 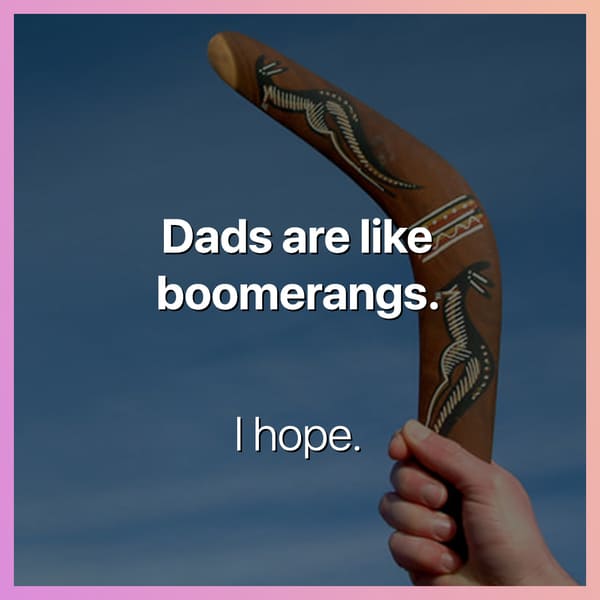 21. In a Vegan Zombie Apocalypse, who would still die?

When she finds a load of serious bondage gear and fetish mags. She asks her husband “what do we do?”

Husband says “I’m no expert, but I wouldn’t fucking spank him.”

23. A boy comes home from a fishing trip with his father

His mother says, “How was the fishing trip, son?”

The boy replies, “I had a great time, every day daddy threw me out of the boat and I had to swim back to shore.”

The boy replies, “It wasn’t so bad, the hard part was getting out of the bag.”

24. People afraid of pedophiles need to just grow up 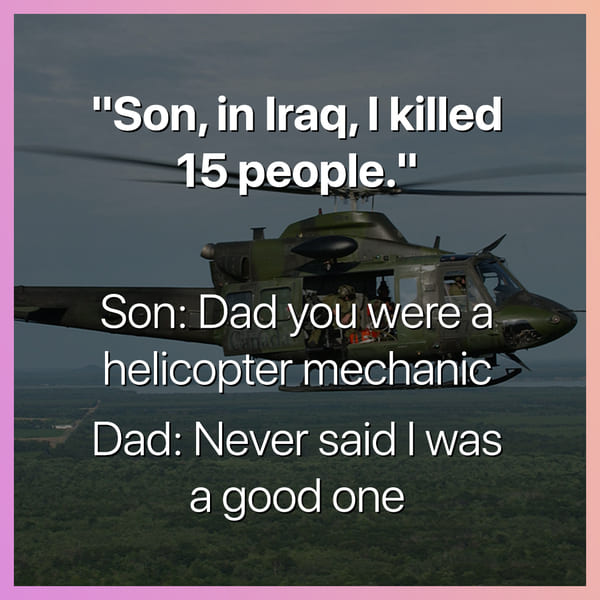