If you were an ’80s or ’90s kid, you probably remember laying in your bed at night on Friday the 13th hoping the superhuman Jason Voorhees (and his weird hockey goalie mask) wouldn’t break into your house with a giant machete—where’d he get that thing?—to murder you. He was not playing around. This guy was mad. Was it mommy issues? Jealousy that he couldn’t also have fun teen sex? Or was he just totally psycho?

Or maybe it was the potent power of Friday the 13th? Historically, this date has some weird significance (and still does, evidenced by modern buildings constructed without a 13th floor). In the Western world, it’s associated with unluckiness (you know, like getting macheted by a freak).

It falls on any day that starts on a Sunday. It might have something to do with Jesus’ death on Good Friday (and the disciples who partied hard the night before his death). But let’s be honest. No one really cares about its history. We just know it’s spooky…and we just wanna meme-ify it.

Behold the many hilarious Friday the 13th memes that are more entertaining than the movie franchise itself: 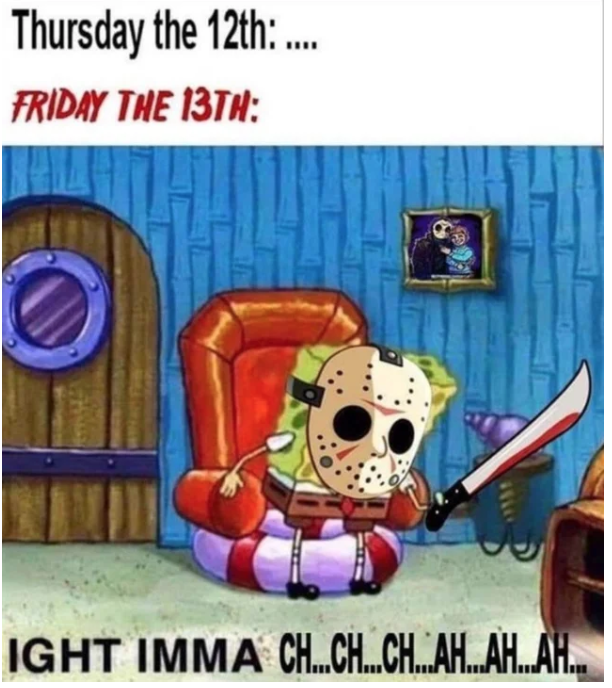 Happy Friday the 13th, you crazy kids. Remember if your car breaks down on a rainy night, and you can’t get a cell phone signal, the best thing you can do is walk to the nearby derelict summer camp and split up to look for a landline and/or a place to have sex and/or smoke weed.

How to survive Friday the 13th:
Keep calm
Don’t go swimming
Don’t have sex
Don’t smoke
Don’t drink
Don’t go out
Don’t split up
Don’t run from the killer
If you trip, get up and run
and above all….
Turn on the stupid light before entering the room

Friday the 13th, a day where people post jokes and memes about Jason Voorhees, when the murderer from the original film was his mother. Another situation where a man takes credit for a woman’s work.

Happy Friday the 13th everyone, the day when you are allowed to kill one teenager without consequence

— memes to look at instead of talking to your family (@MemesCentraI) December 10, 2019

“It’s Friday the 13th I need my man to murder this pussy like he’s Jason” pic.twitter.com/FwJkBvRM67