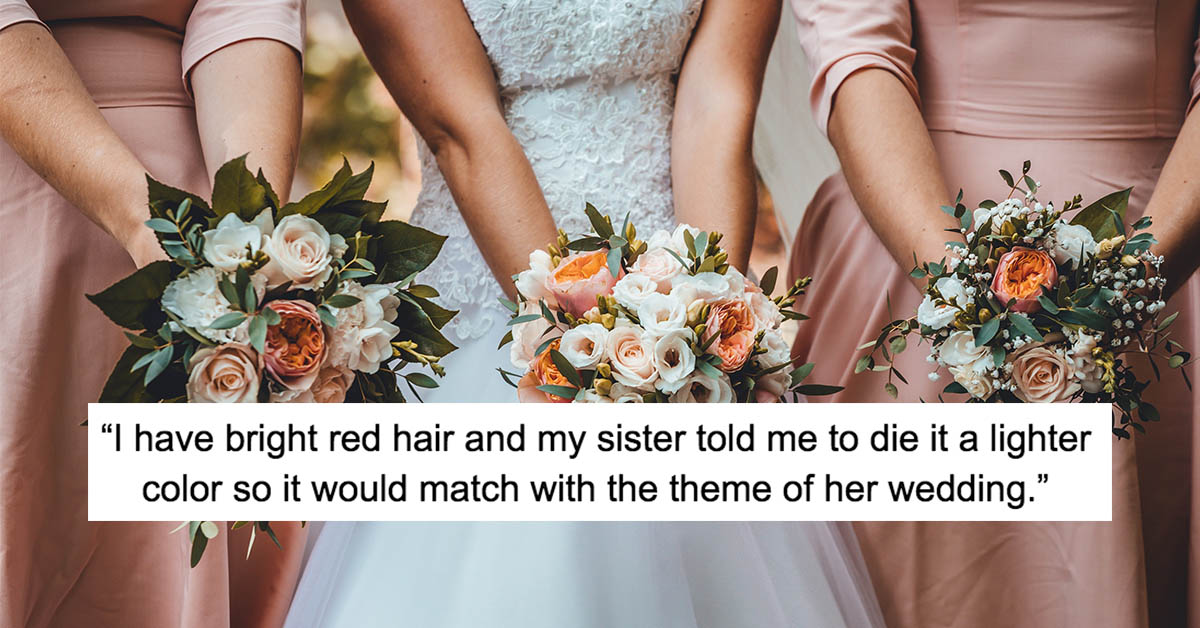 While being a bridesmaid is a huge honor, it can also be a huge burden.

And some bridezillas take that burden to the max.

My now-former friend lived up north in Michigan, I was down in Texas. Of course our summer and hot outdoor/temperatures began much earlier than theirs, so I would spend time at the pool cooling down. When I arrived north, she was appalled by my tan and tan lines. She made me get a spray on to cover them up so I wouldn’t look bad in her pictures, then made every other bridesmaid (and herself) as well get one to blend a little better. Well, wedding day arrives and she goes off on me because the spray was rubbing off on our dresses and causing stains on her dress and ours. –samanthac455c19c1f

For a “Bachelorette Party,” the bride made a group of 8 bridesmaids, including the bride, participate in a Ragnar Trail Relay. No one was athletic except maybe 2 of us. We had to camp out for two nights all while running 16 miles through the Atlanta mountains andwoods. Que port-o-potty mishaps, twisted ankles and sunburns. The last night of the weekend, we were suppose to actually go out and have fun at bars. We ended up showering and going to bed at 10pm because everyone was so exhaused. –WhiteTigerCav

My sister demoted me from maid of honor two days before her wedding. My sister and her best friend got into a fight several weeks before she was engaged. She ended up asking me to be her maid of honor and I was delighted. Two days before the wedding they made up and became friends again so my sister decided to make her best friend maid of honor instead and asked me to give my dress to a cousin who had lost her own dress. I wanted to refuse but my mom wouldn’t let me. I had already had it tailored to my petite size. BFF showed up wearing her own gown to the wedding, and Iwas told to “suck it up and be supportive of her” while having to search for the exact same dress at the last minute. The only available one was three sizes too large and I to safety pin myself into the gown to walk down the aisle. The best part: they got into it after the wedding and aren’t even friends anymore. –Lady

I was 19 days postpartum with my first baby, she wouldn’t latch and I was strictly pumping. My best friend asked me to go dress shopping with her and scheduled a 13 hour day for us. She said if I wasn’t ready to leave my baby she totally understood. Well, I told her I wasn’t ready and she flipped, kicked me out of the wedding and refused to talk to me. The couple broke up 2 months later. –keaghan

Not a request made by the bride, but by the bride’s mother. I was my best friend’s maid of honor and the only person in the bridal party who was under 21 (I was 20 at the time). My best friend had always said she wanted to have male strippers at her bachelorette party. We live in a very rural area where having strippers come to you just isn’t possible. All of the nearby male strip clubs were at least 2 hours away and required you to be 21 in order to get in. Determined to make sure the bride got what she wanted, I decided to plan a nice meal in our hometown followed up with a limo ride to some male strip clubs. I would only attend the first half of the night and give the rest of the gals a fun send off. The bride’s mother agreed to help with paying for the limo ride as it was going to be very expensive to travel so far. While discussing accommodations with her, the bride’s mother began to make commentsabout how I needed to get a fake ID in order to go see the strippers. I thought she was joking and laughed it off. She continued to press me and say that if I didn’t get the fake ID I would be ruining the bachelorette party altogether (apparently my best friend told her she’d rather give up the strippers and spend the evening with all of her friends, me included). She quoted me prices to get a fake ID and indicated where I could go. I had just gotten a job working for a counseling agency with strict measures in place regarding legal history. When I realized she was serious I explained to her that I could not risk my job for one night of male strippers. She then told me I obviously didn’t care about my best friend as I was choosing my job over her. She refused to speak to me or acknowledge me from that point forth. I scrapped the limo and strippers since I couldn’t afford it without her and my friend made it clear I was more important to her than naked men. It’s been 7 years and the bride’s motherstill will not speak to me. –alexandriam4b38a7a7f

My best friends grandmother died on her wedding day and her aunt asked me and her cousin to tell her. She was barely getting into her dress. –Anonymous

They chose an outdoor ceremony at a bird sanctuary. On the morning of the wedding, the bride’s parents, the groom and I were all handed spades and garbage bags and were told to pick up all the goose poop from the ceremony site. It took us hours. –rebeccam4e04c2006

My best friend of 20 years got married last year, and her personality completely changed during the planning process. I was asked to wear “at least” 5” heels to her wedding ON THE BEACH, because I am 5’1” and all the other bridesmaids were 5’6 or above (everyone else was allowed to wear flip flops). She asked us all to pay for our own dresses, which is fine, but did not ask us what our budget was. We are all straight out of college making barely a livable wage. She found an $800 dress and would not budge when we all approached her asking to find a less expensive option. Finally, she excluded our other best friend (the three of us grew up together) from the bridal party because she’s a natural redhead, and that would “take attention away” from her, the bride, during the ceremony and photos. –Bbartlett246

I was told that the bridal party would be flying firstclass to Las Vegas for a one week bachelorette party and the bride would not be paying for anything so we had to split her costs. We were 23 and I was making about $500 a week. We also had bridesmaids dresses that looked exactly like the Cinderella dress, blue with a sash and gloves and cost about $600. It was eight months before the wedding when my long term boyfriend broke up with me and I asked the bride to give me a week off from planning because I was upset. I was kicked out of the wedding over wanting this one week break. In hind sight I was very lucky and they were divorced before their first anniversary. –elizabethw41ce21485

My sister married HERSELF. I had to buy a black jumper, fly to Colorado, and be one of like 8 bridesmaids to walk down the aisle as my sister wore a wedding dress, gave vows toherself, then walked out to white snakes “here I go again on my own.” Even worse, she actually put in the invite that his whole event was costing her a lot of money and that we should all give her money to cover the cost, after buying plane tickets and hotels because she is the only member of the family who lives out there. –danieller49edc2f94

So I was a bridesmaid for my mother wedding. My dress was a light purple and I thought nothing could go wrong. My friend ended up coming to my mother’s wedding and well, we played. I fell down and I had to get a different dress. This was also the day of the wedding. The dress was over 10,000 dollars. –miya_clark

Over $500 PER BRIDESMAID for the bridal shower brunch for sixty-five people. Seven bridesmaids. And this did not include teas and sodas. Guests that wished for a hot or iced tea or a soda HAD TO PAY because coffee, orange juice, and a bottomless mimosa fountain were all that were included for beverages. Budget discussed a year prior – which included invites, decor, and a group gift from the bridesmaids – was $250. The $500+ we all ended up paying did NOT end up including a joint gift. The shower ended up being way nicer looking than the actual wedding. –j4d64f7396

It was my cousin in laws wedding, and I was asked to be the bridesmaid (there was only one maid of honor as well). The day of her bachelorette party, my cousin (the groom) calls me and says the MOH forgot to planthe whole thing and begged me to plan something that day, super last minute. I didn’t have lots of money bc I was still in college, but I agreed and shelled out lots of cash to put on a good party for her. The MOH took credit for everything I did and refused to apologise after. And lastly, the bride had my cousin (the groom) and the MOH’s boyfriend drive us around bc she didn’t want to pay for parking or have other men around us, even though everything had to be penis themed… –lagrandeoptimiste

I was told to become Vegan by my future S-I-L. The entire destination wedding was going to be strict vegan. She started sending me notes on changing to a vegan lifestyle to ‘prep my body.’ I got regular patronizing emails about detoxifying my life and she signed me up for an accountability group. I learned all the bridesmaids were considered her clients for her new wellness coaching business. She demanded I share testimonials about my life changing the experience. I felt sorry for my brother, but I was thrilled when the wedding got called off. –decoyduck

I wasn’t originally planned to be in this wedding, but one of the bridesmaid’s, the groom’s sister, dropped out last minute. Having growing up with the groom, and also being his Ex-girlfriend, and my mom being friends with his mom…his mom asked me to take her daughters place as bridesmaid the day before the wedding. Super awkward, especially since his entire family new me and thought I’d be the marrying him. –myrissap