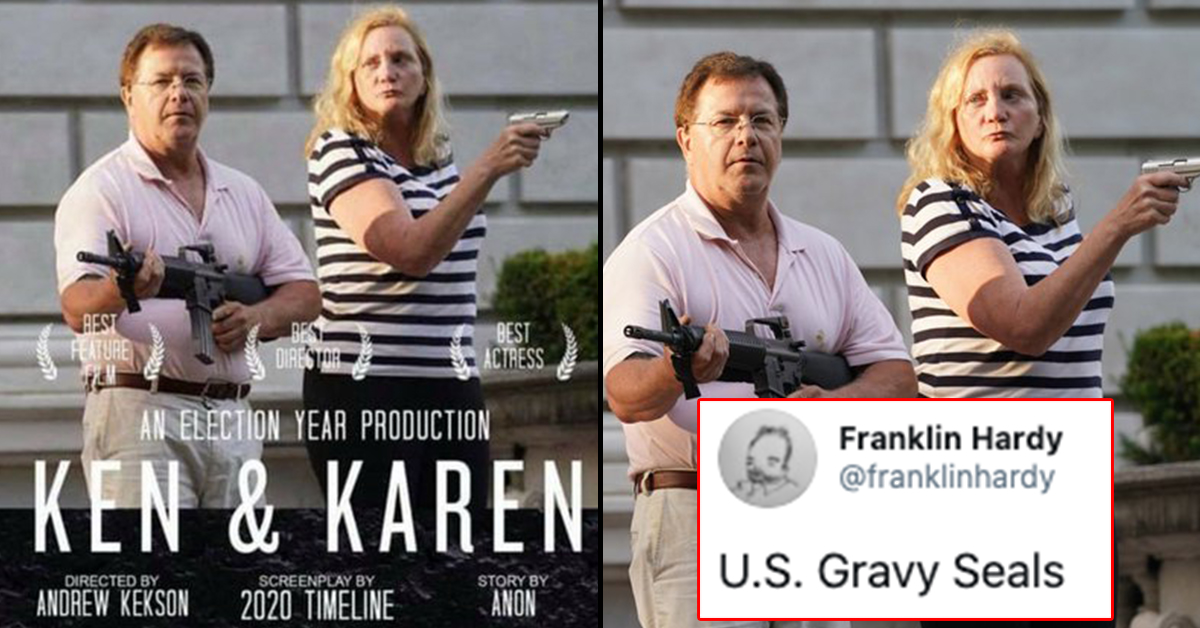 The Internet seems incapable of responding to anything in a normal way, so of course, this Missouri couple brandishing deadly weapons on a crowd of peaceful protestors has been turned into a wacky meme called “Ken and Karen.”

Their real names are Mark and Patricia McCloskey, according to the Daily Dot, and they’re both personal injury lawyers who live in some sort of gated community that a group of protestors heading to  St. Louis Mayor Lyda Krewson‘s house passed by. The protestors were going to demand Krewson’s resignation after she gave out the names and addresses of people advocating for the defunding of the police. This is obviously a gated community full of people who like to put people in danger:

A couple has come out of their house and is pointing guns at protesters in their neighborhood #StLouis #lydakrewson pic.twitter.com/ZJ8a553PAU

here’s what happens when you march on Portland Place in St. Louis, MO

they’re scared of their own community pic.twitter.com/Ng8qW1Pa6C

The couple obviously looks ridiculous, since they clearly don’t know how to handle guns, are barefoot, and frequently point the barrels of their weapons at each other. But what’s not ridiculous is that they’re clearly willing to kill the Black and brown people marching by and have the means to do so. And Donald Trump has retweeted a video featuring the couple, in seeming support of their horrible actions:

Donald Trump this morning proudly retweeted the video of “Ken and Karen” pointing their guns at black people in St. Louis. Trump never misses an opportunity to fan the flames of white resentment and racial unrest. pic.twitter.com/zdSi7GReAX

Well, the president being awful is nothing new. Neither is Twitter naming this couple “Karen and Ken” and making them into a total joke. On the other hand, now everyone knows where they live. You ask for danger, you get danger. Instead of brandishing weapons when the Mayor is being addressed, try giving a good interview to Fox News.

what you think you’re gonna look like//what you actually look like pic.twitter.com/x8j163q5CS

This woman has mustard on her shirt pic.twitter.com/og1gXCids2

when antifa destroys all the buffalo wild wings and cheese factories in suburban midwest, this is their final boss pic.twitter.com/ACPstQ0cPh

I can’t believe they activated the Margaritaville National Guard. pic.twitter.com/szOeoqAefK

Protecting my home by barefootedly shooting my tiny husband in the head with a .22 pic.twitter.com/DixdI7w2HJ

This was the PERFECT opportunity to finally use their homme-debout and they missed it smh https://t.co/nKOGhpKEWt pic.twitter.com/34nm4XNQfv