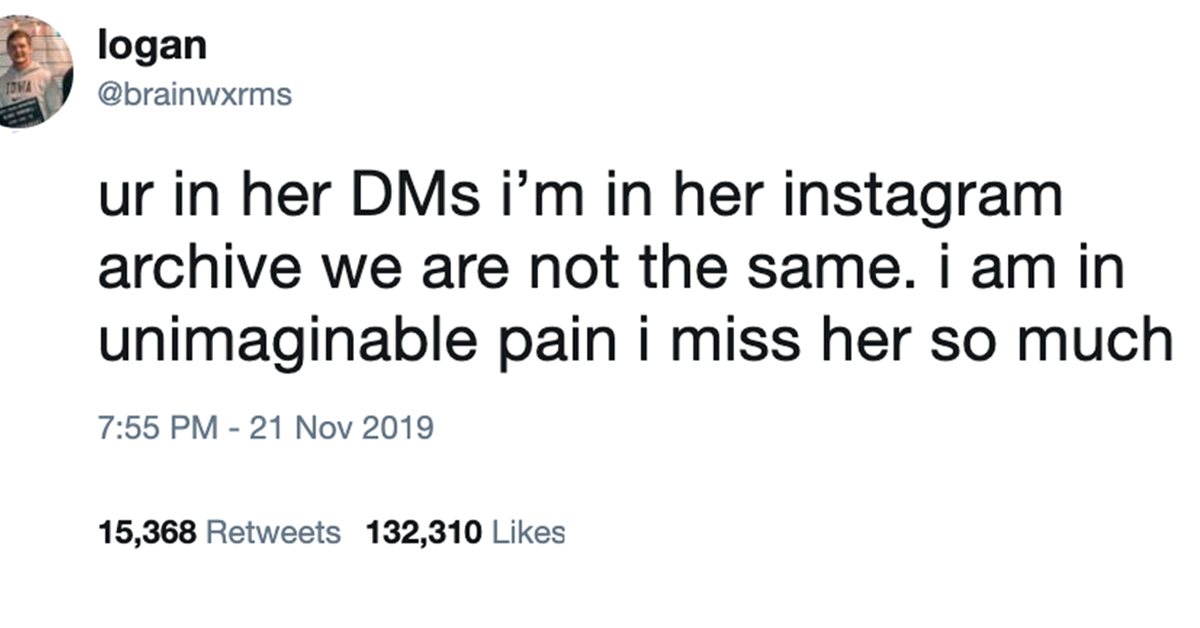 We Are Not The Same Memes hit Twitter running in fall 2019, and consist of self-aggrandizing comparisons between people competing for romantic partners—though they’ve devolved into self-roasts of the highest caliber.

The script of this meme goes something like, “you’re in their DM’s, I’m ______. We are not the same,” with the understanding that while the first person is merely talking to them on social media, the one making the statement is the true object of their affection.

ur in her DMs i’m in her instagram archive we are not the same. i am in unimaginable pain i miss her so much

The We Are Not The Same snowclone—which knowyourmeme.com defines as “phrasal templates in which certain words may be replaced with another to produce new variations with altered meanings, similar to the “fill-in-the-blank” game of Mad Libs,” and the funniest of them end in a self-deprecating punchline.

Here are 38 of the best and funniest We Are Not The Same memes:

ur in her dm’s, i’m in her spotify wrapped as her artist of the decade we are not the same

you’re in his dms, i’m in his mind when he listens to frank ocean. we are not the same.

You’re the pageboy. I had a phantom blackmail the producers of this opera to cast me in the role of the Countess. We are not the same.

ur in her dms, i’d rather throw myself into a volcano than see a picture of her beautiful face because i will never kiss it again we are not the same!!!

you are in her house pretending to be an english tutor, i am in her underground bomb shelter stealing food every few nights and traumatizing her youngest child on his birthday. we are not the same

u may have happiness, joy, friendship and love but I’m making 10k a month from selling my nudes. we r not the same

u in her dm’s, i’m breaking her covalent bonds, we are not the same https://t.co/2g26WCgx5z