Reddit’s “Am I the Asshole” never runs out of content to both amuse and horrify readers at every turn, and a recent submission by an unfit father certainly seems to fall more into the category of “horrifying.”

Dearest dad wrote into the subreddit to ask if he’s an a—hole for putting his 9-year-old daughter, who he refers to as M, on a diet (spoiler: yes).

After noting that he and his ex split about four years ago, he says he recently moved back to the same town and began seeing his daughter on alternate weeks.

“I had noticed M starting to put on weight,” he writes. “She’s not obese but seeing her in person, I’ve noticed she has a belly which hangs over her waistband, and she wears 12-13 clothes despite being only 9.”

AITA for putting my 9yo on a diet and ’emotionally damaging’ her? from r/AmItheAsshole

He complains that his ex won’t listen to his concerns.

“I spoke to ex and she got defensive, saying that M ate what she eats (ex is skinny and health) and has a sport she goes to twice a week,” he says. “I asked about portion sizes and other exercise (twice a week for 90mins isn’t that much) I was trying to stay friendly but ex shut me down.”

Apparently his kid being active and eating food that keeps an adult healthy wasn’t enough for dad, so he took things into his own hands.

“I did not put her on a crash diet but I did start using a portion control plate and packing lean lunches instead of letting her by her food,” he writes. “I also took her to the gym with me 4 times a week.”

He didn’t tell his ex what he was up to, and says he spoke with his daughter about being “mindful of what she eats.”

But things finally exploded in dad’s face after a birthday party his kid went to with her friends.

The party took place at a movie theater, and the parents asked for each kid to bring their own snack, and said that they would buy them all popcorn as well. Asshole dad packed his daughter veggie sticks and hummus for the movies, and dropped her off.

In a turn of events anyone (except dad, apparently) could have seen coming, his daughter refused to eat popcorn, refused to eat pizza at a later segment of the party, and told all the other kids they were going to get fat.

“M was crying saying that she was scared if she ate anything bad she’d put on weight and everyone would hate her,” he writes.

Dad heard all of this from his ex, who was incredibly displeased he was making their child diet in secret.

“[M] told ex about our diet and gym. I hadn’t because it was my weeks and why should I divulge all our plans,” he complains. “Ex ranted saying M always came home tired and refusing to eat. She blames me for giving M a complex when she was healthy and active. I said if she was healthy she wouldn’t have a belly and be bigger than other girls.”

“Now ex is telling me she won’t send her back to me if I don’t stop ‘emotionally damaging’ her,” he says. “So AITA?”

The commenters did NOT hold back in ripping this guy a new one.

“Man, your daughter is NINE,” writes GabiCoolLager. “She is a little chubby, for what you have said, and she was CRYING because she was scared if she ate anything. For christ’s sake, YTA and you are f* your daughter’s life up.” 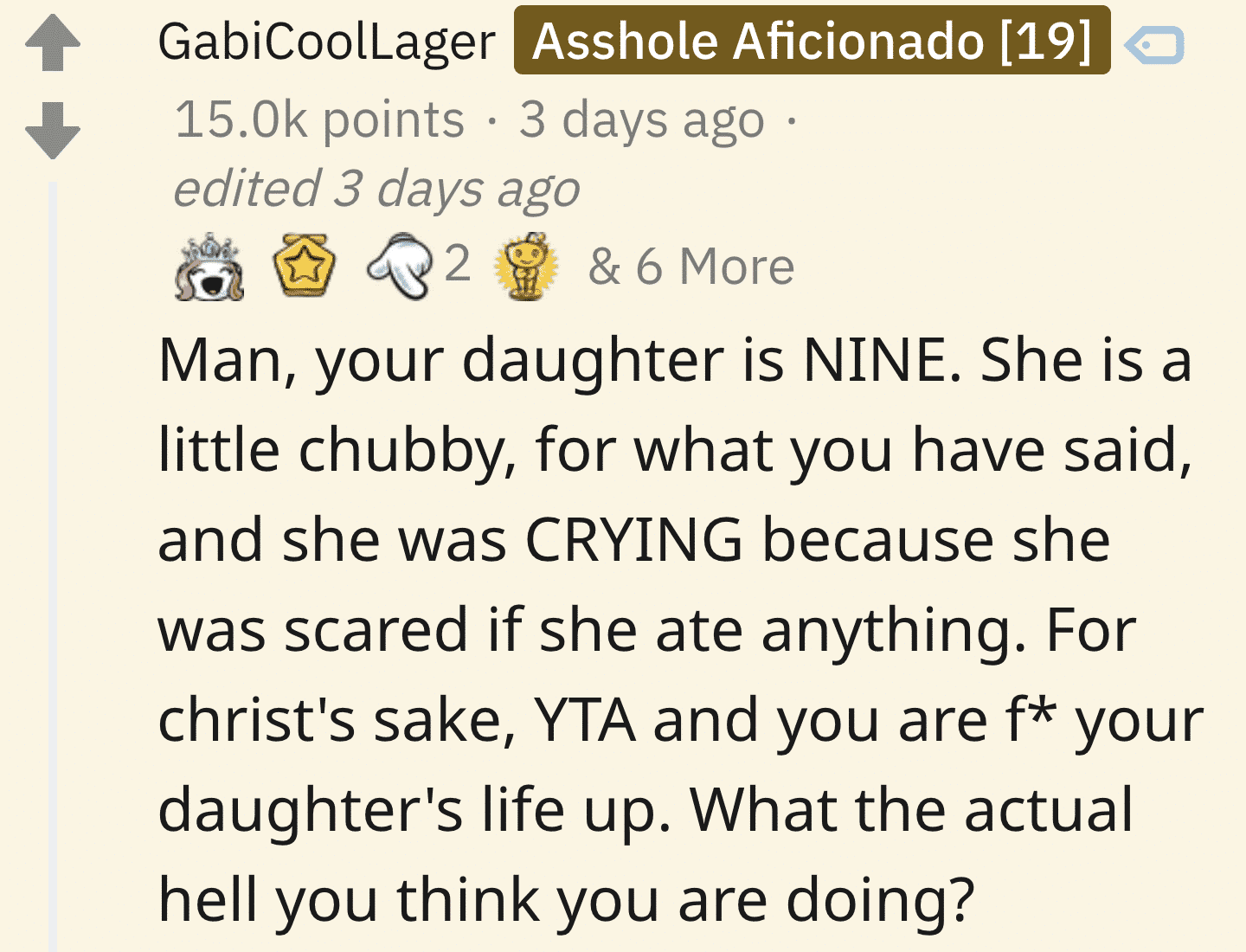 Others pointed out that it’s absolutely normal for kids to put on weight before a growth spurt, or before puberty. Their bodies are still massively changing…because they are literal children. 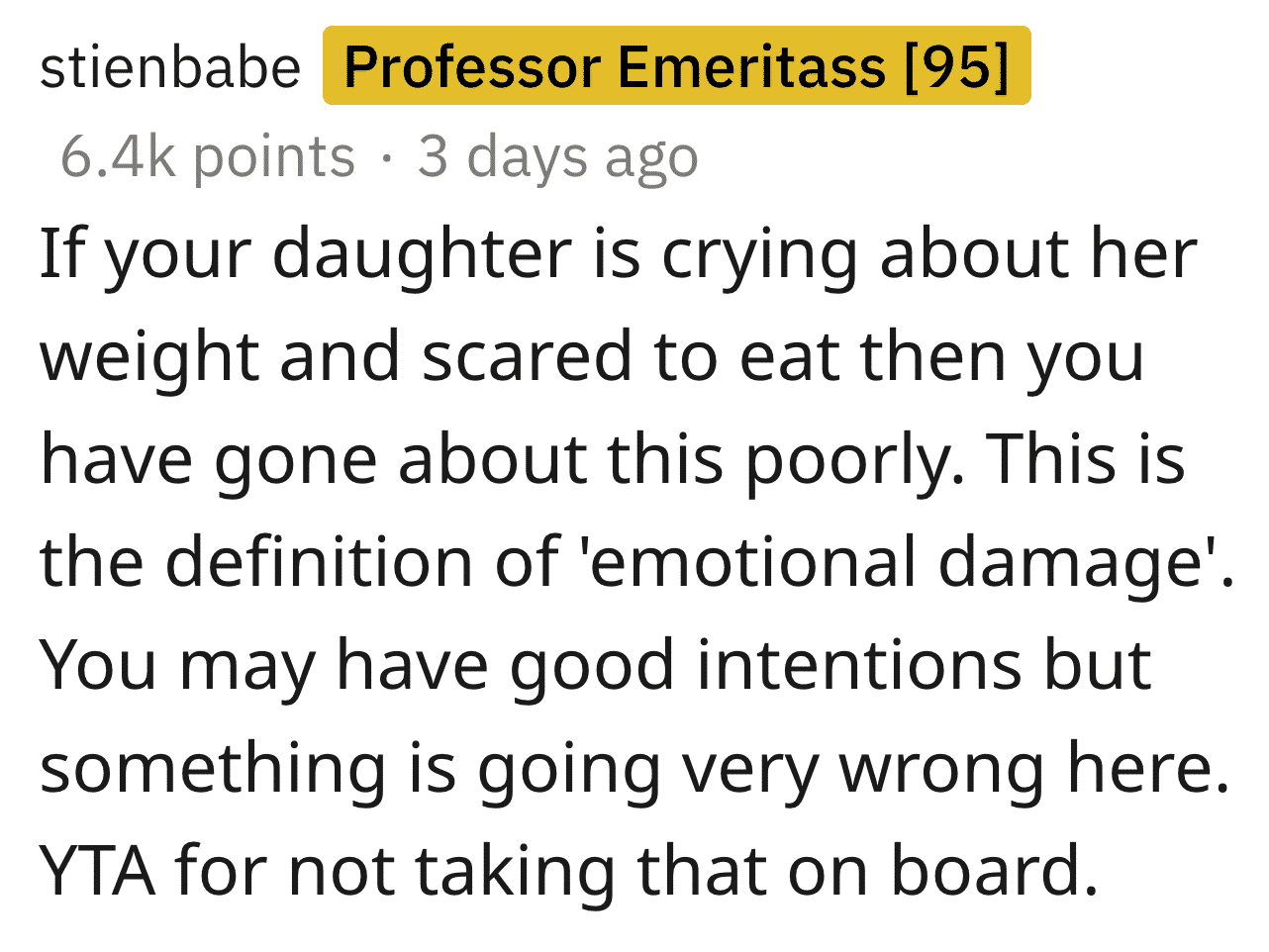 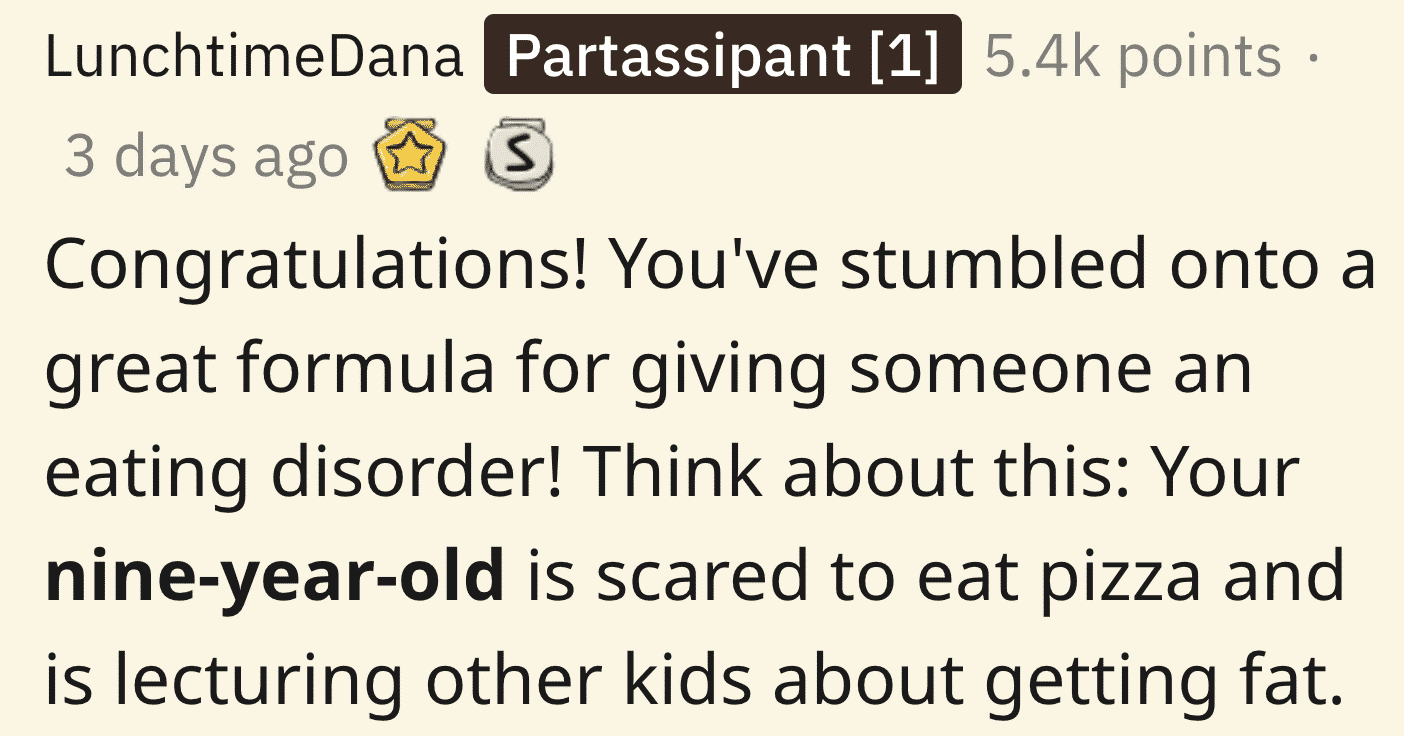 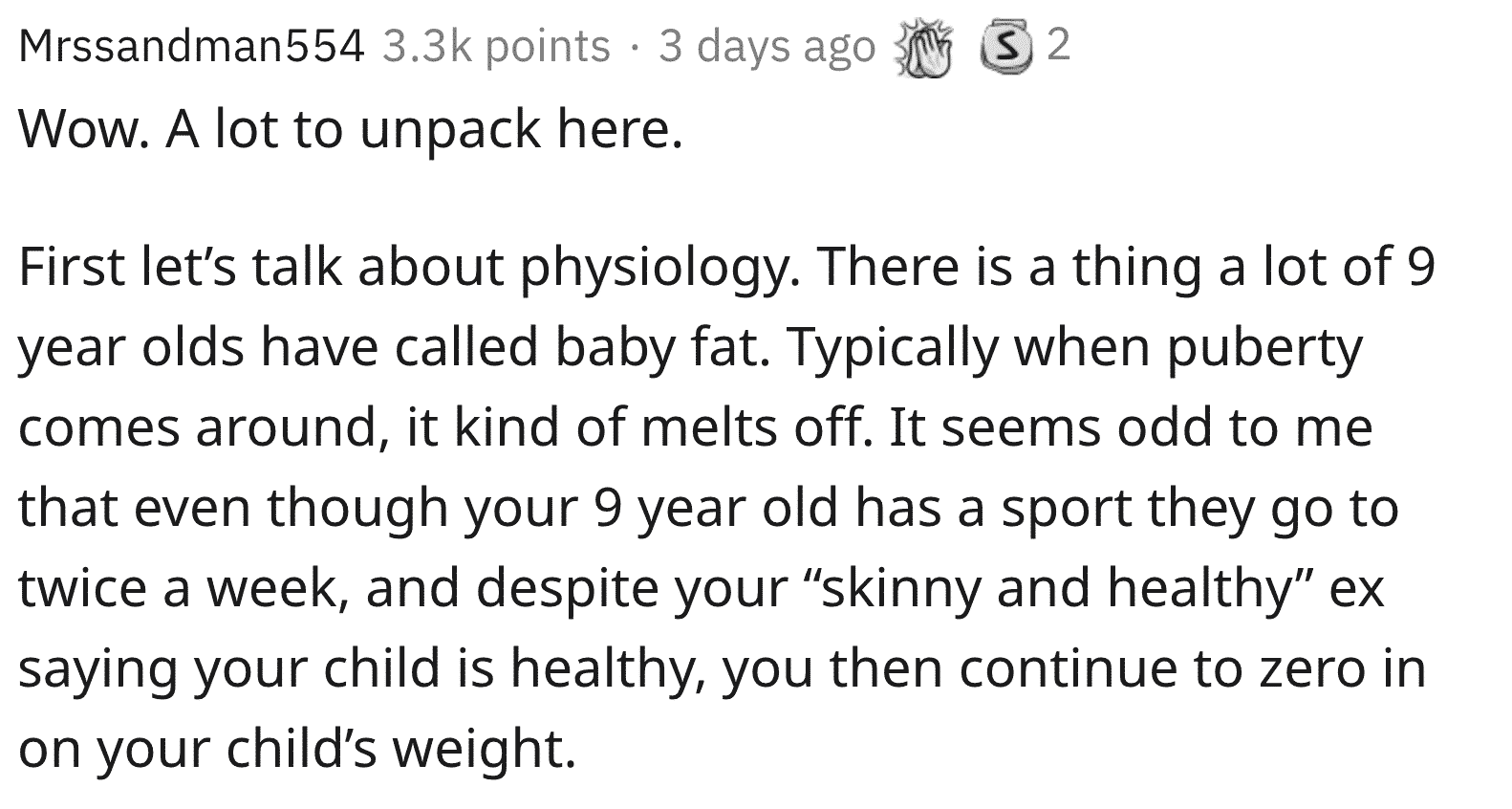 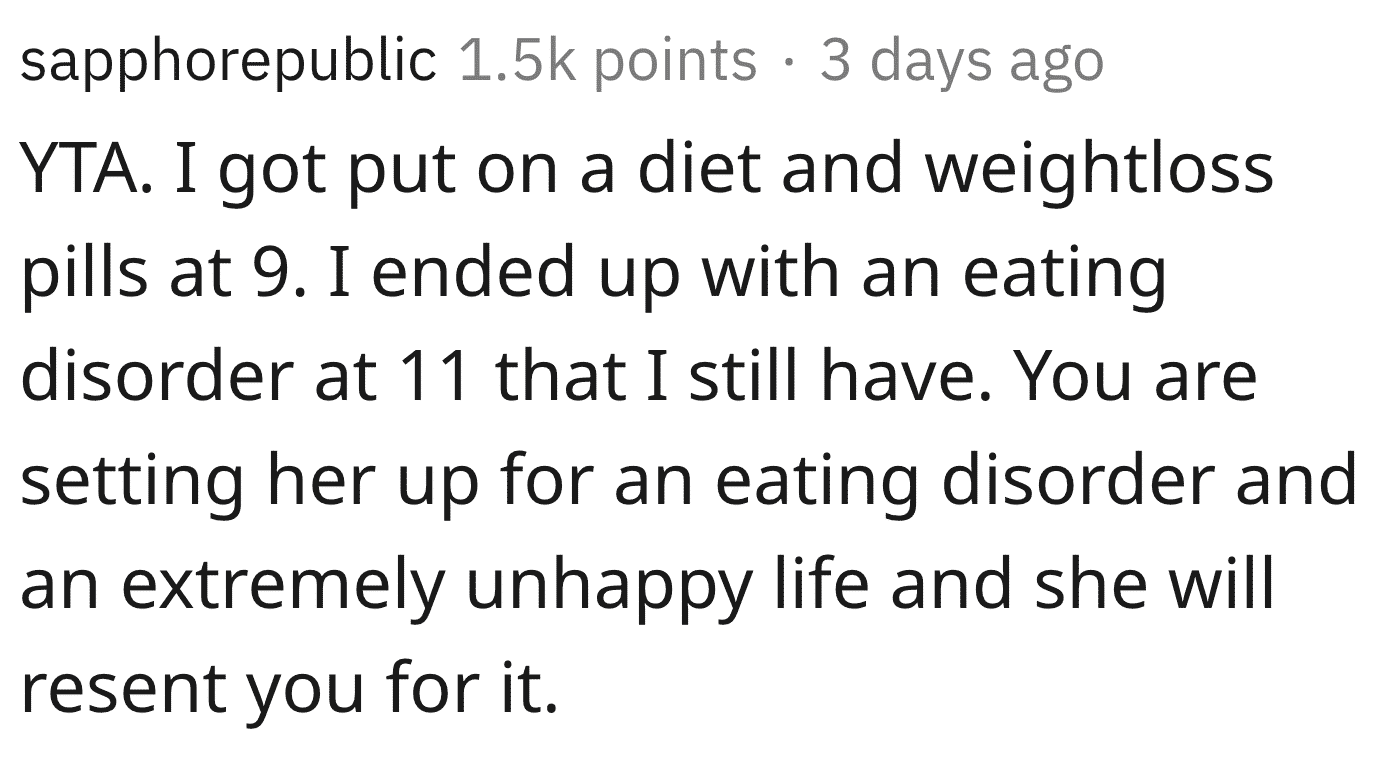 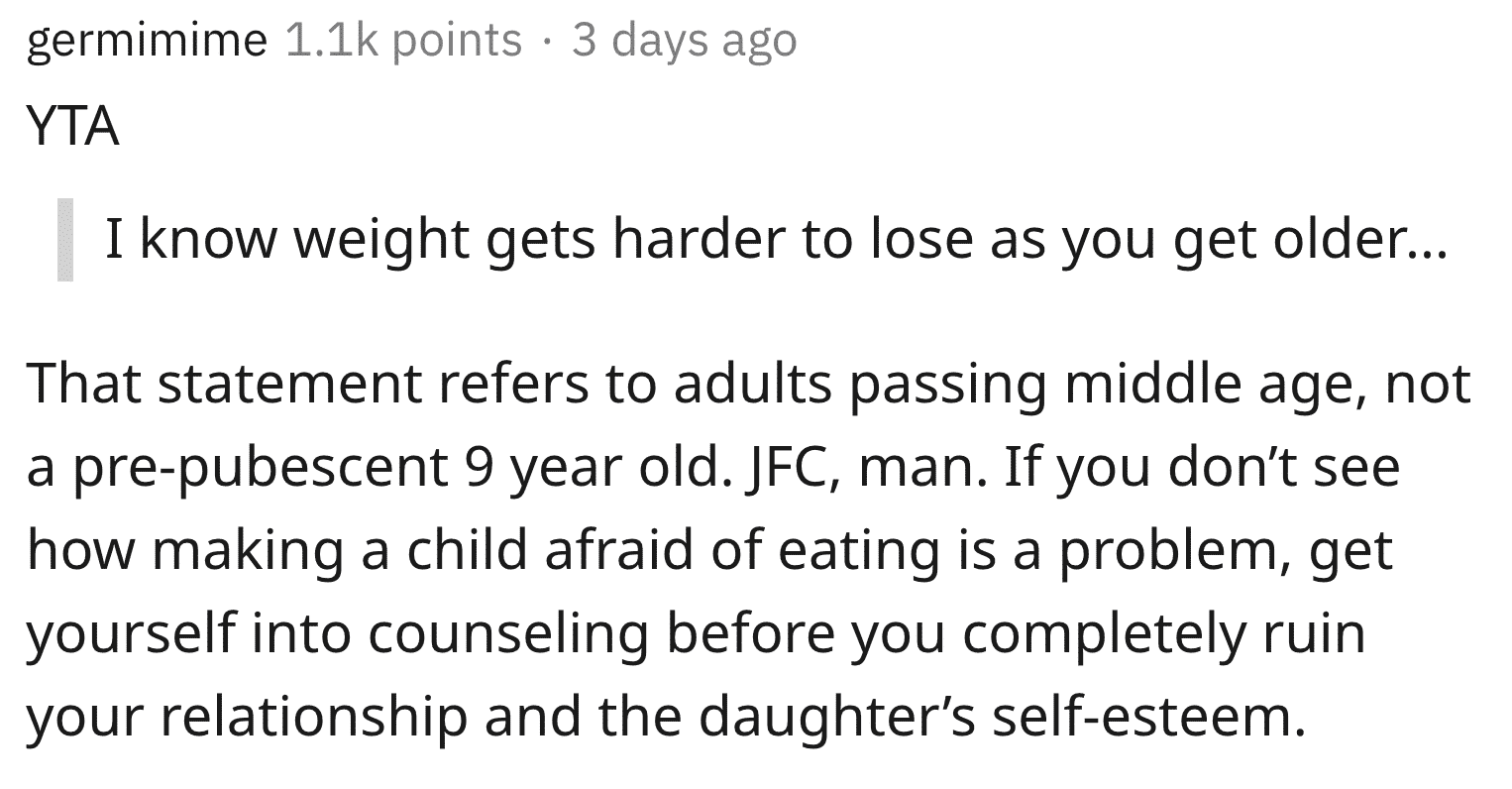 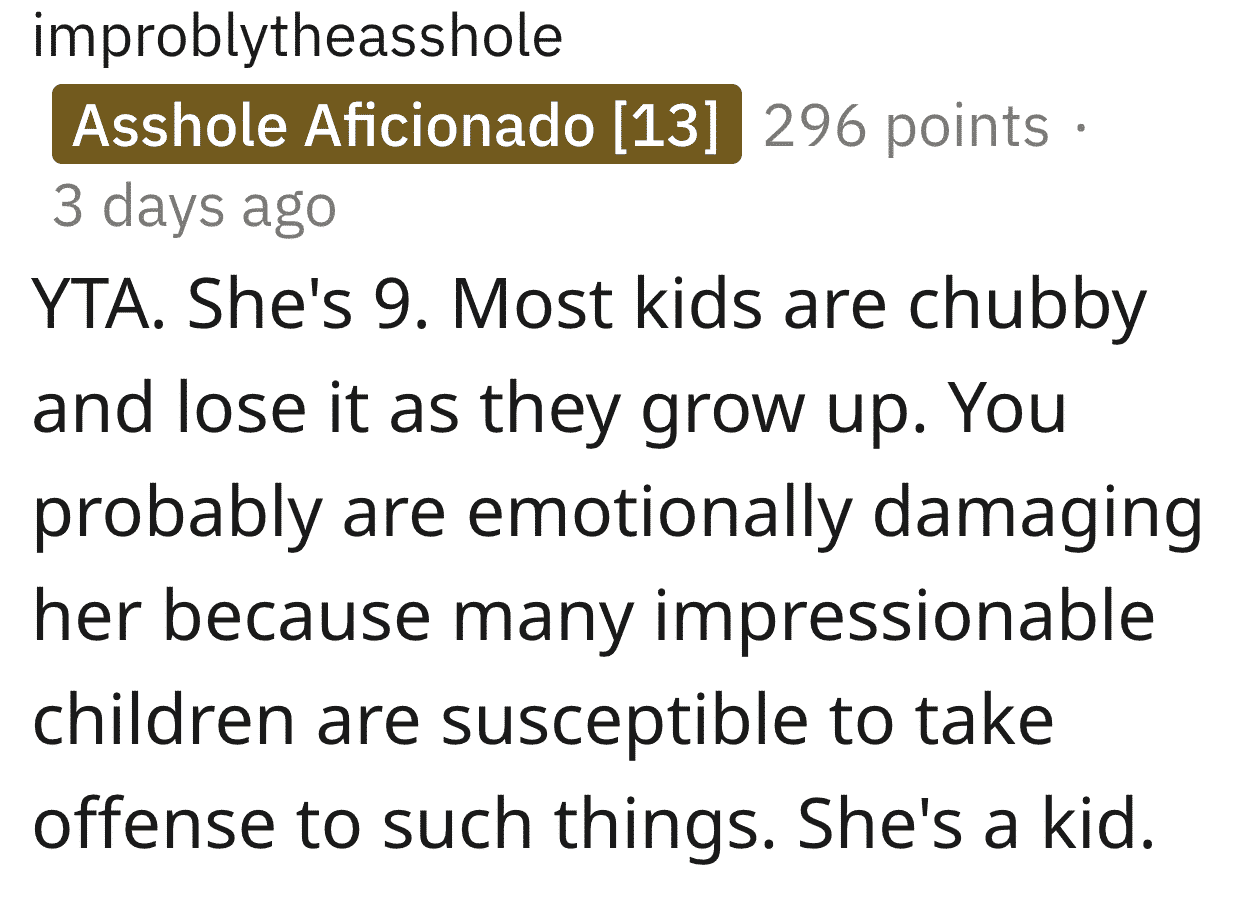 In conclusion, yes, dude, you are definitely, definitely the a—hole.