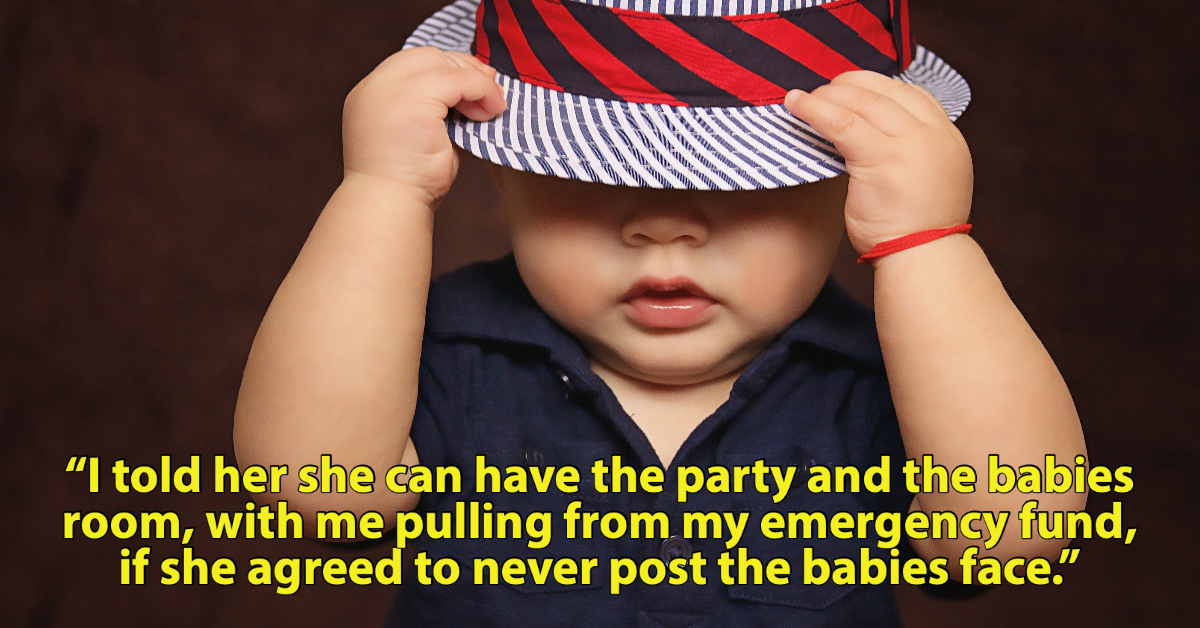 One of the decisions you need to make today when you become a parent is whether or not your child will have an online presence. There are a few ways to do this, obviously. You can have an Instagram or Facebook account that’s pretty much just for friends and family that functions like a photo album. Or you can just share freely all over the internet how adorable your kiddo is.

It’s probably a good idea for both parents to agree on how and when to share your spawn’s face online. One Redditor disagrees with his partner about this issue — but also, this couple seems to be off the same page about a lot of other things, too.

“So my fiancé is due soon and is so excited to throw a baby shower for quite a bit of people. I told her that we don’t have the money to both throw a party and get the babies room as ready as we should have it. She insist that since it will be our only baby that she deserves this extravagant baby shower. (She’s big on influencers online and nice elegant parties.)”

“I brought up a discussion we had before that I don’t want the kids photos ever posted online until it is old enough to make those decisions. She thinks that’s insane and is me trying to control her. I told her she can have the party and the babies room, with me pulling from my emergency fund, if she agreed to never post the babies face. She did not like that at all. AITA?”

Redditors think this is an ESH situation.

“ESH. The both of you have wildly differing views about having and raising kids. The both of you should’ve ironed that crap out BEFORE expecting a kid. Turning everything into transactional items is going to do nothing but create resentment between the both of you, thus negatively impacting your kid. Grow up, talk like adults, and the both of you need to make reasonable compromises when you can’t agree on individual concerns or else y’all are going to end up divorced and using the kid as a pawn for your reindeer games.” —

“ESH. This is two separate issues, they should not be compared/leveraged against each other. I’m wondering why you are throwing your own baby shower? Typically a family member or friend organizes/throw that for the parents to be? Your concern for your child’s privacy is absolutely valid, but it’s one that should just be brought to your fiancé as you talk about how you will raise your child. Stop the bargaining. Work on communication. You need to be on the same page when you become parents.” —

“ESH you should have discussed how to raise your child before deciding to have a child. You also should have gotten on the same page about finances.” —

“NTA. Prioritizing your child’s consent and privacy is good parenting and something that I think is going to become more and more of a conversation in coming years. I suspect you are going to have a fight on your hands with your partner on this though.” —

“ESH you’re conflating two arguments to use to your advantage. Y t a for trying to get what you want by using this party as a bargaining chip when one has nothing to do with the other. She’s the A H because it doesn’t seem like she is listening to your reasoning about Internet safety. You are both adults. You should be able to decide on a reasonable budget so you can get the room ready and have a party, even if it means neither is as lavish as you expected. And you both should do your research on the realities of Internet safety, share resources with each other, and come to a solution or some sort of compromise (privacy levels, etc).” —