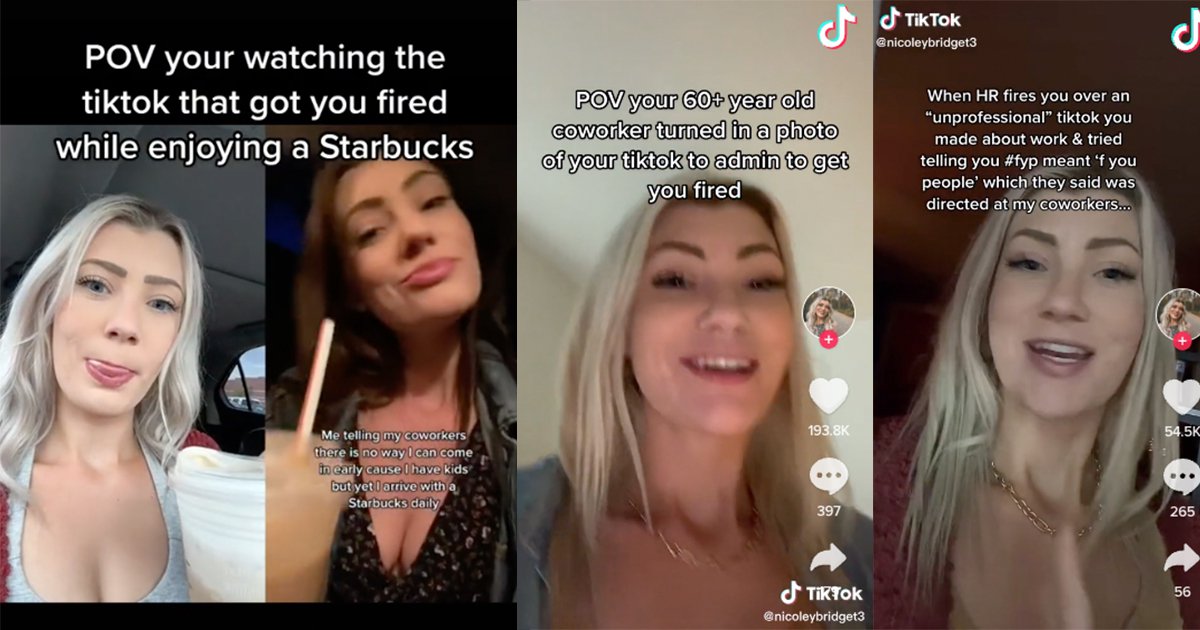 A series of TikToks posted by former teacher Nicole Johnson (nicoleybridget3) told the story of how a simple video she posted to the platform ultimately got her fired. According to Nicole, one of her co-workers, and a friend at the time, showed it to her administration.

The video in question shows Nicole sipping an iced coffee from Starbucks with a text overlay that reads: “Me telling my coworkers there is no way I can come in early cause I have kids but yet I arrive with a Starbucks daily.” She then winks at the camera and sips the coffee.

Nicole says that a screenshot of the TikTok was taken, printed, and shared with administrators. This set off a chain reaction of inquiries into her work ethic and adherence to school protocols. She explains in one of her videos that she never claimed to be coming in late, she merely had the time to stop by Starbucks in the morning because she wasn’t coming in early, which she and her co-workers were asked regularly to do.

This TikToker and teacher responded to a hater from her original TikTok that was shown to administration and got her fired.

In another one of her videos, Nicole states that a 60+ year old coworker somehow saw the video and took a screenshot of it to tattle on her to an administrator, who then began launching an investigation into Nicole’s work. Her TikTok poked fun at the older co-worker, saying in the audio “I didn’t know it could do that.”

Her caption on the video read “I didn’t even know she had a tiktok lol oops.”

During Nicole’s HR investigation, she claims that she was told the TikTok was posted as an insult directed at her coworkers, and that the #fyp hashtag, which is typically associated with users on the platform attempting to get more eyes on their content, i.e. landing on the “for you” page.

Nicole says she was told by human resources the #fyp hashtag was interpreted as “f**k you people,” and was assumed that the tag was geared towards others she worked with. According to the now-former teacher, she had to explain to HR what a for you page was to administrators, and that her TikTok wasn’t a “gloat” over coworkers who were coming in early, only that she took an extra ten minutes out of her morning commute to grab a coffee.

The teacher posted other clips stating the up-and-down nature of the TikTok drama and how it came about during an emotional time of her life. She says that she was placed on administrative leave and that it appeared like all of it would blow over, only to return back to work to “emails about [her] attendance after 8 years of employment.”

In multiple TikTok posts, Nicole shared screenshots of her text message conversations with some of her co-workers. Many apologized for the situation and made sure to clarify that they weren’t the one who “snitched” on her. Some even claimed that none of her co-workers were actually responsible, and that the video had been sent in anonymously from an outside source. Supposedly, Nicole still isn’t positive about who turned her in.

“Well if it’s worth anything, it wasn’t any of us who turned Nicole in.” One text message read:

Nicole explained that she had been extremely stressed and depressed and had spoken to her union multiple times about working out a solution and why her attendance had been lacking. In a “Part 2 Why Was I Fired?” video she covered all the issues she had been going through up until the moment of her termination.

“I gave them my diagnosis of ADHD which like I said was something that also accumulated to my struggle. They said they wanted a doctors note. My doctor advised me to wait until I knew their intentions with it because they were afraid they were just going to use it against me,” she says in the clip.

“I did improve my attendance. I asked for a 10 minute accommodation because the schedule for the school year had changed.” All of her excuses/reasons for her lack of attention to her job continued to add up. It seems like Nicole may have had too much going on for her job to handle.

In another video, that showed Nicole in tears of grief from having to leave her students. She explained that she was “gunna miss them so much.” Apparently, the students composed a stack of “we miss you” letters and drawings that were sent to the teacher in response to her sudden termination.

Nichole’s TikTok of her upset about having to “abandon” her students brought for sympathy regarding her situation.

The original video that started it all was simply Nicole making a joke about not showing up to work before she was scheduled to come in. The text overlay on the clip reads, “Me telling my coworkers there is no way I can come in early cause I have kids but yet I arrive with a Starbucks daily.” Her wink in the video tells it all and was easily misinterpreted by whoever it was that sent the video into HR.

Posting videos such as this while still employed at a job can be very risky, as you never know who may have ill will against you and wants you gone. May Nicole’s story be a strong reminder to be mindful of what you post on social media!

Below is the original TikTok that was anonymously sent in and got Nichole fired by the administration:

What are your thoughts on what happened to Nicole? Do you think this was a case of wrongful termination and should be pursued further? Or do you think Nicole had to have done something legitimately wrong to have been fired over such a little thing, especially in the midst of a teacher shortage? Let us know!