Gregg Segal is a photographer who is inspired by stories about consumption. One of the projects he is well-known for is called 7 Days of Garbage. Segal asked some very accommodating people to collect their food garbage for seven days, then photographed them sitting in it, with the intention of showing just how much waste humans create.

It can vary widely from place to place and culture to culture, but in the U.S. we mostly just stuff it in the trash and forget about it. The artist wants to confront people with their choices so they think about them a little bit more.

I didn’t think it was right to shoot other people with their garbage and not photograph my own family, too. Like others, we were surprised by the amount of packaging we consumed. @traderjoes, I’m a fan of your products and pricing, but you need to do more to reduce plastic, particularly with your produce. I hoped the experience of saving our garbage and being photographed in it would open my son’s eyes to the problem. With kids, it’s sometimes hard to know how much they’re absorbing, but a couple weeks after the shoot, we were in the car and Hank, who was 7 at the time, said “Dad, the world will be covered in plastic bottles. They’ll have to make giant towers to keep all the bottles in. Probably a tower up to the moon.” He got a far away look and said, “1,000 years ago, there were no plastic bottles. There wasn’t even one plastic thing on Earth, but there sure are now!” #everydayisearthday #noplanetb #reducereuserecycle #7daysofgarbage

In an email interview with Ruin My Week, Segal said that while working on that project, he noticed how much packaging was involved with food. It made him start wondering more about how people cook, prepare, or buy their meals.

Jesus, photographed in 2016 for Daily Bread. Jesus was raised by his mom, who was a teenager when she left her family and home in Michoacán, Mexico and made her way to Los Angeles. Jesus, his mom and his 2 older sisters shared a one-bedroom apartment south of downtown infested with roaches and rodents. Jesus saw little of his dad whom they discovered had another family. The only meal Jesus ate most days was dinner. His 1 hour commute to school didn’t leave time for breakfast and the school lunch was so unappetizing, a piece of fruit was all he could stomach. Mom made chicken and rice most nights. On special occasions she’d make Jesus’ favorite: tamales with red chile sauce. Growing up, Jesus was aware there were people worse off than him. He joined a student organization to feed the homeless and volunteered with @peaceoverviolence a non-profit helping victims of domestic abuse. Jesus just finished his sophomore year @harvard, with a double major of applied mathematics and psychology. Jesus has had more opportunities than he could ever have imagined, though knows there are obstacles ahead. @Erin cc2la thank you. #dailybread #whatkidseat #schoollunch #mom #successstory #proud #humbling

“We’ve grown totally dependent on the industries of eating and cooking and the result has been a massive increase in waste. I began to ask, how have our diets been impacted by this revolution in the way food is produced and consumed?”

“It struck me that we don’t give enough thought to what’s in our food because we’re not the ones making it! We’ve outsourced the most vital ingredient of life, the connective tissue of families and culture. I thought, what if we keep a journal of everything we eat and drink for one week to bring our focus onto diet & take ownership of the foods we eat?”

Segal decided to focus on what kids were eating, reasoning that diet habits start pretty young. He traveled to nine different countries to photograph children with their weekly meals, calling the project Daily Bread: What Kids Eat Around The World. The results were astounding: 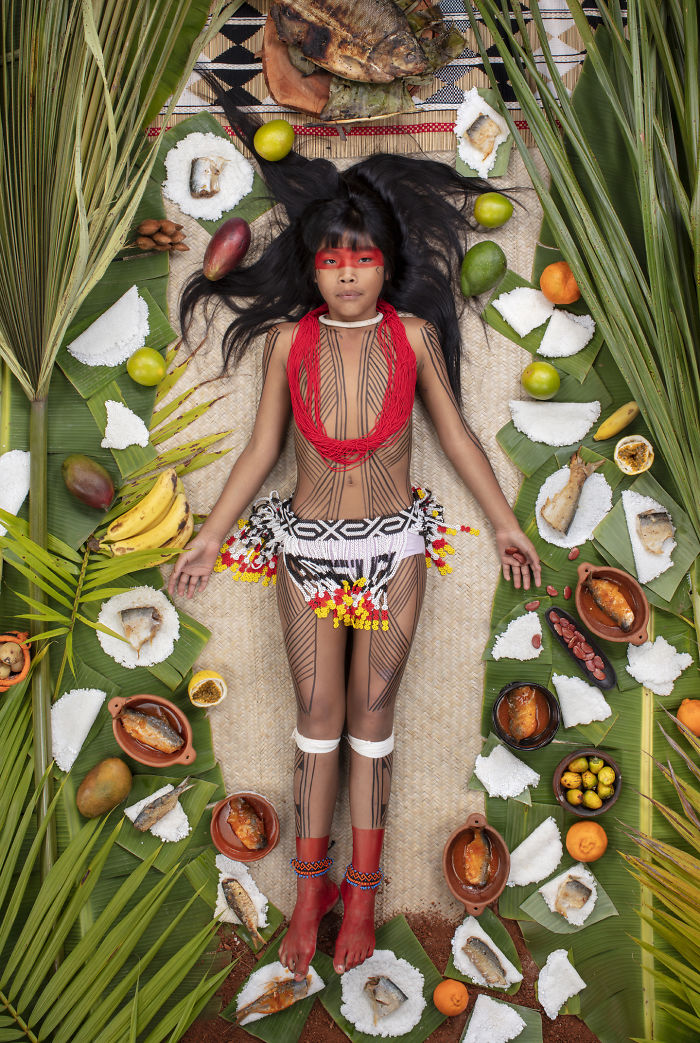 Segal also uses the pictures to shine a light on issues of food access, like in this picture of a girl named Kawakanih, who lives in the Amazonian basin with her tribe.

“One place Nestle won’t reach is the Xingu National Park, a preserve in the Amazonian basin. Surrounded by cattle ranching and deforestation, the park is home to Kawakanih and her tribe, the Arawaki. Kawakanih’s daily bread is manioc, a potato-like root that’s ground into flour and used to make beiju, a sort of cassava pancake. Kawakanih wraps her beiju around fresh fish she catches in the Xingu River. ‘When you’re hungry,’ she says, ‘you just go to the river with your net.’ For now, anyway.”

There were a lot of challenges to finding kids to represent what’s commonly eaten in their country. The hardest thing was the language barrier. Segal relied on interpreters and a producer in each country to help him connect with families willing to participate.

The kids kept a weekly diary of their food intake, and then on the day of the shoot, a chef would prepare everything they’d recorded. 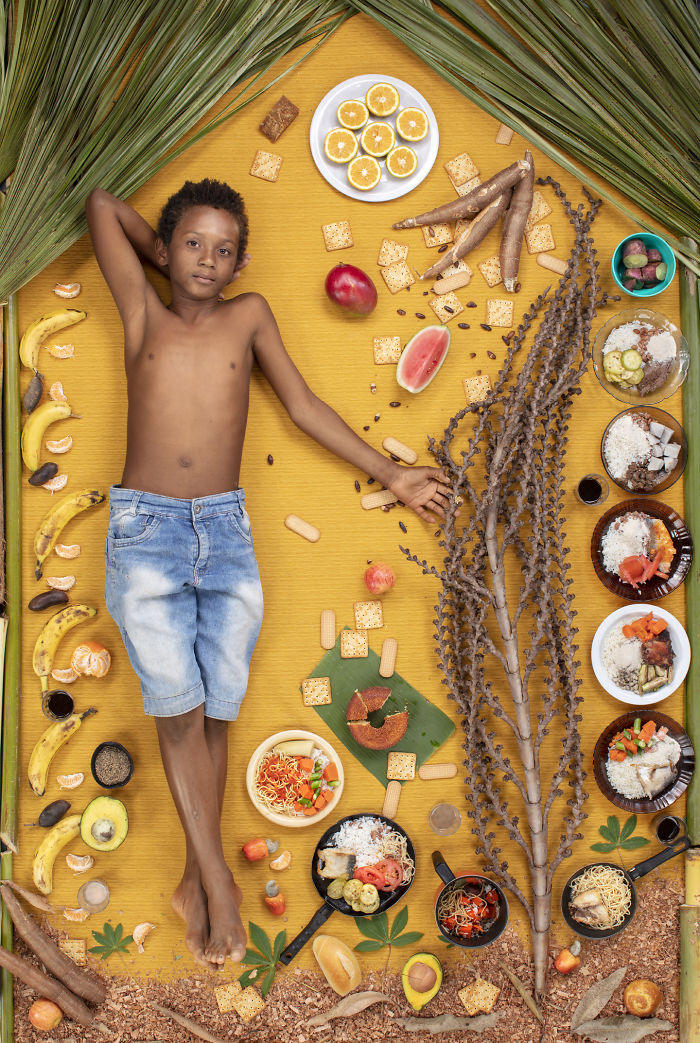 “It’s impossible to ignore the problem of consumption and waste when you’re lying in it!” Segal said. “To me, the most disturbing thing about the garbage I photographed was the packaging that comes with our food.” 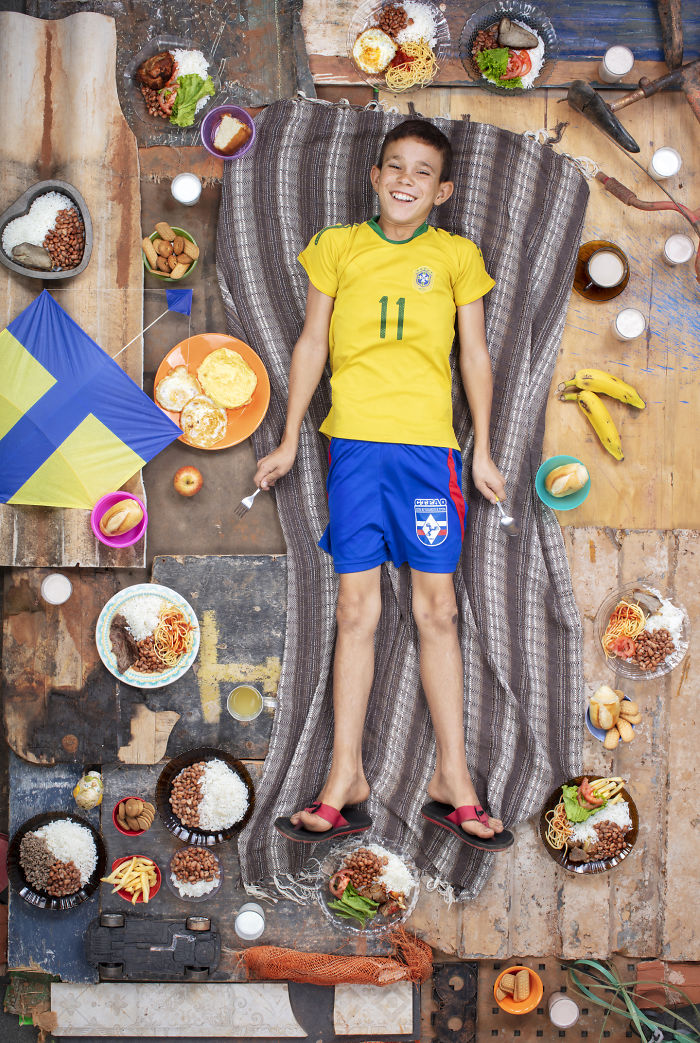 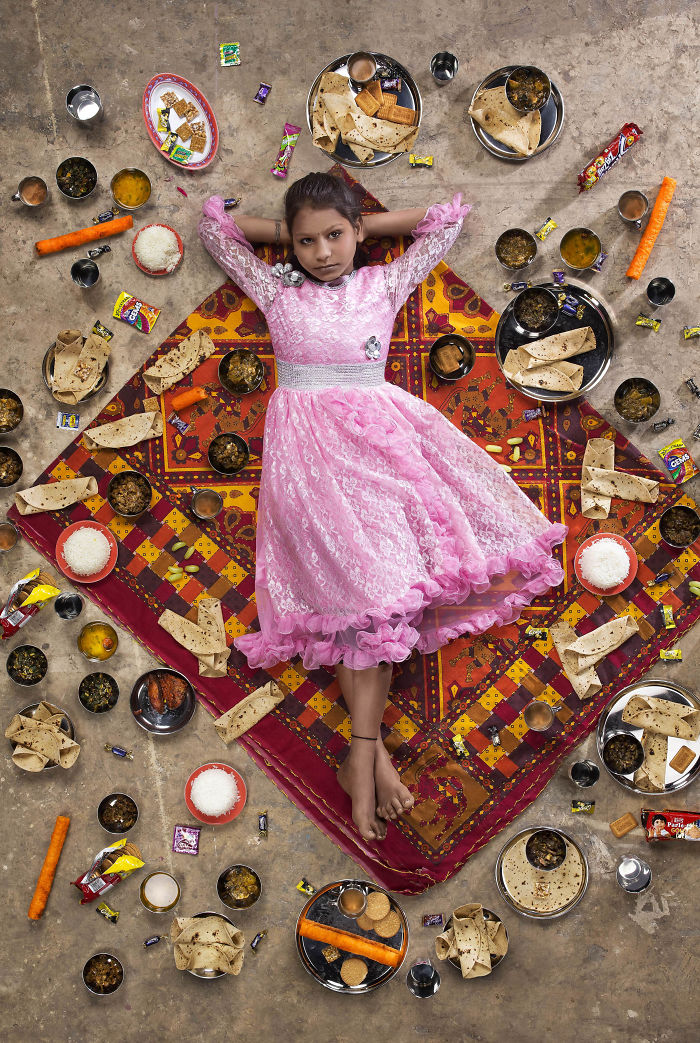 He was surprised by what he found out about people’s diets outside the U.S., since he was unfamiliar with some of the dynamics of fast food versus home cooking.

“One of the surprising lessons of Daily Bread is that the best quality diets are often eaten not by the richest but the poorest. In the US, the poor are the biggest consumers of junk food because it’s convenient and cheap. But in Mumbai, it costs $13 for a medium Dominoes pizza, which is way beyond the means of most people.”

“Anchal lives with her family in an 8 X 8 foot aluminum hut. Her father earns less than $5 a day, yet she eats a wholesome diet of okra & cauliflower curries, lentils and roti which Anchal’s mother makes from scratch each day on a single kerosene burner. Shraman, on the other hand, lives in a middle-class Mumbai hi-rise and eats very differently. His family’s extra income means he can afford Dominoes pizza, fried chicken and treats like Snickers bars and Cadbury chocolate.” 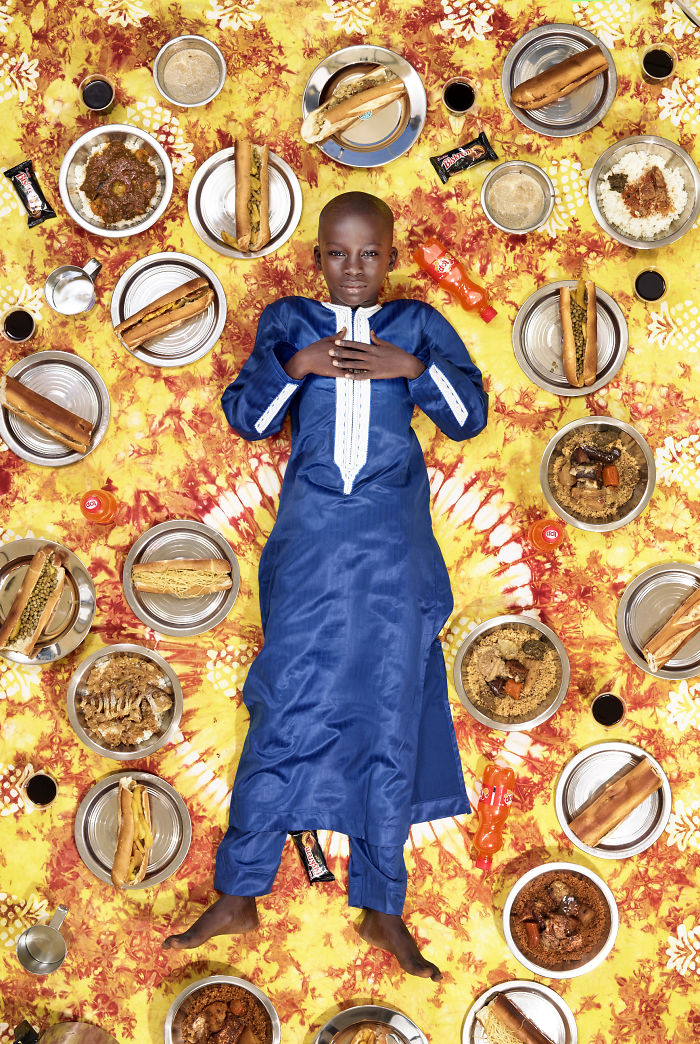 When asked why he decided to represent kids, Segal said, “I focused on kids because eating habits start young and if you don’t get it right when you’re 9 or 10, it’s going to be a lot harder when you’re older!” 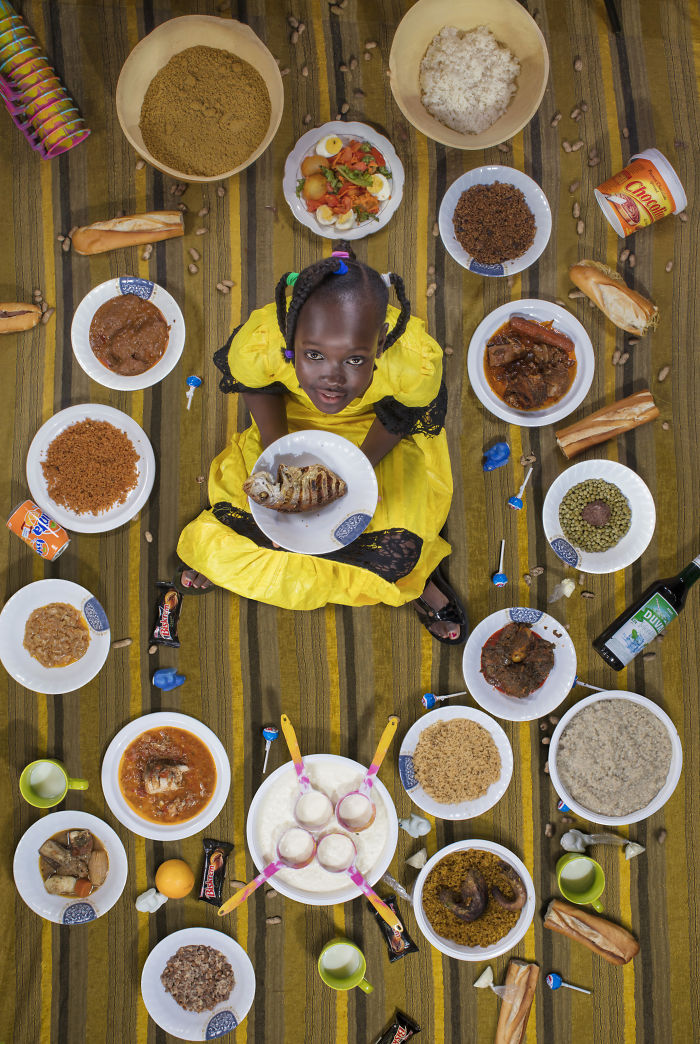 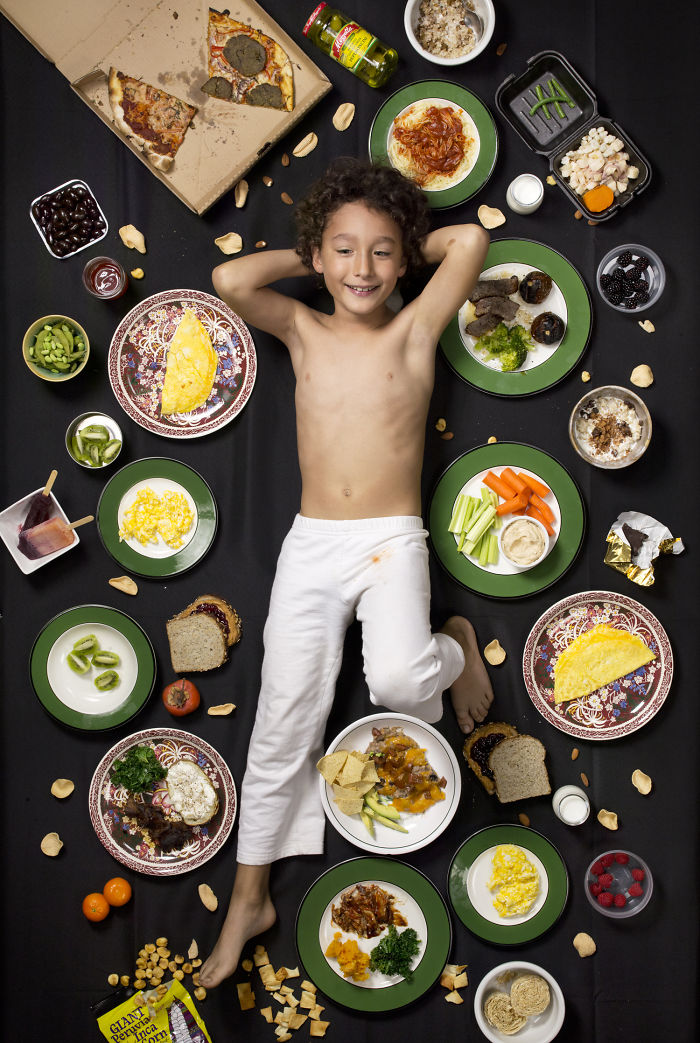 He also says the parents of the kids were pretty surprised by what their children were eating. 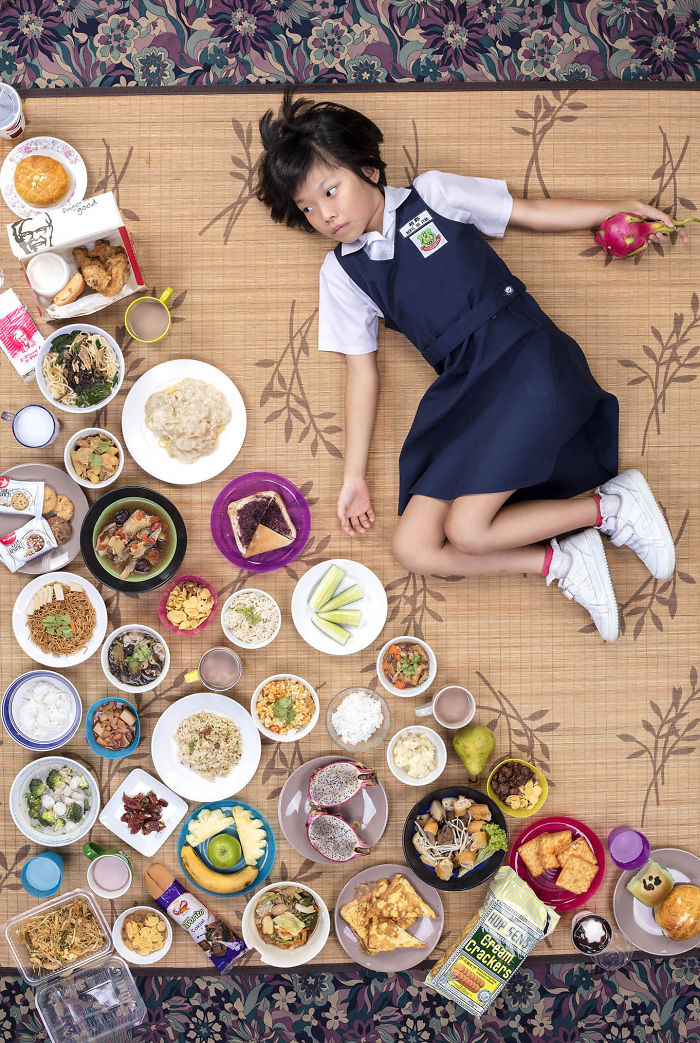 “While I was photographing Adveeta, her father watched as the pictures came up on my laptop. He shook his head and said, “I can’t believe Adveeta is eating all that junk! I’m going to have to talk with her mother!” 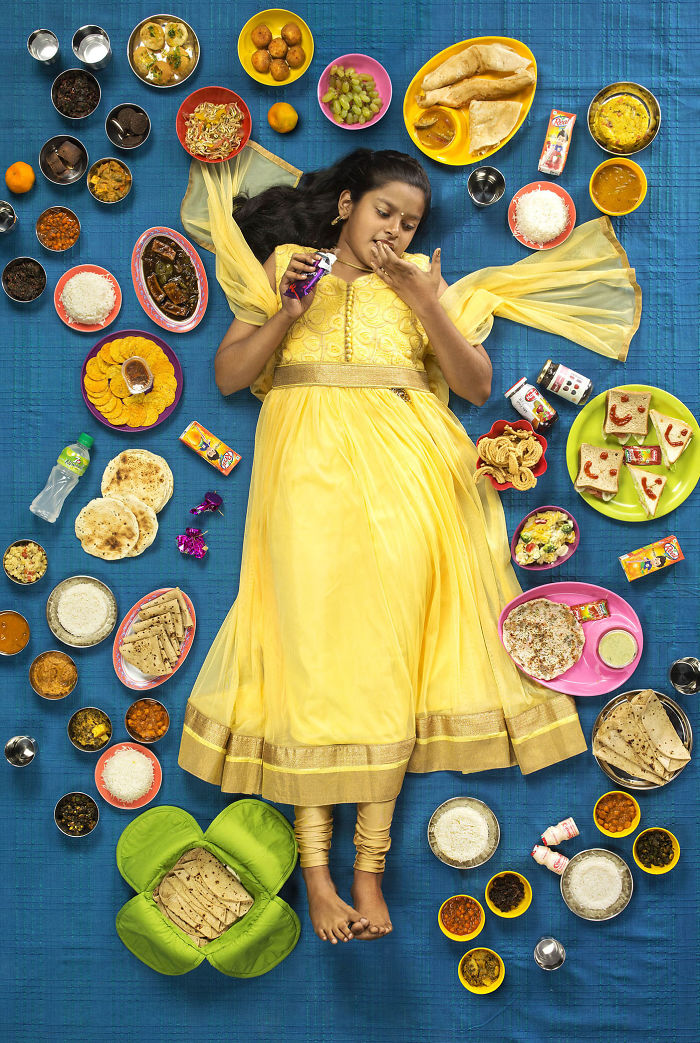 A single mom in Los Angeles looked at all the junk food in her daughter’s diet and blamed her ex-husband. “Except for that bowl of broccoli! That was the night she was home with me!” Parents are blaming each other all over the world because of this project – which tells me that it’s helping move the needle on diet.” 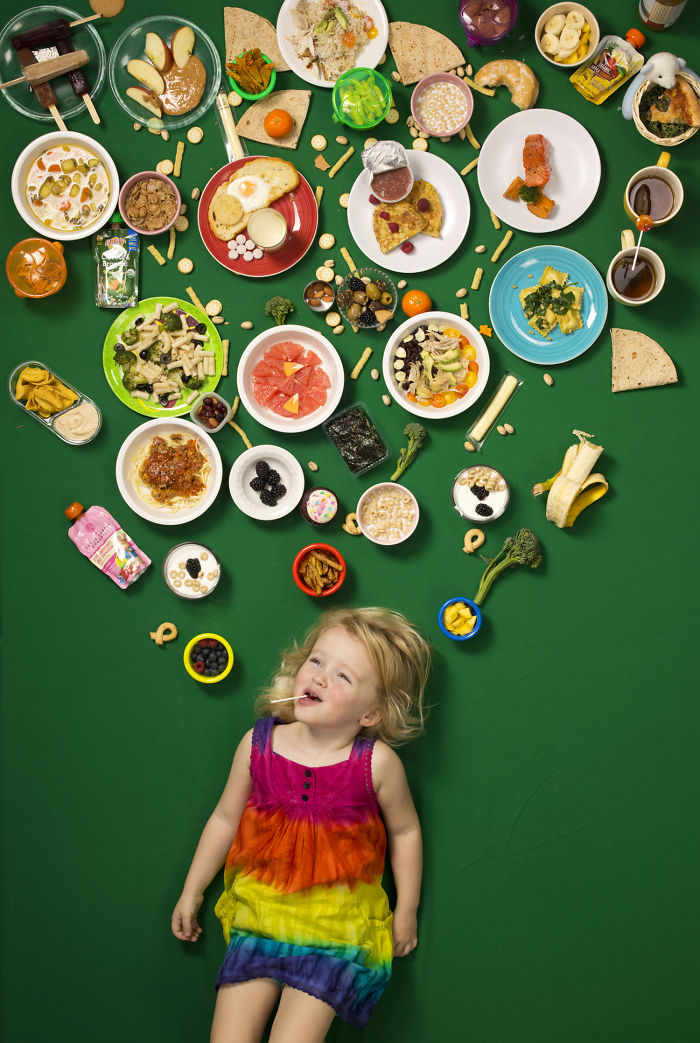 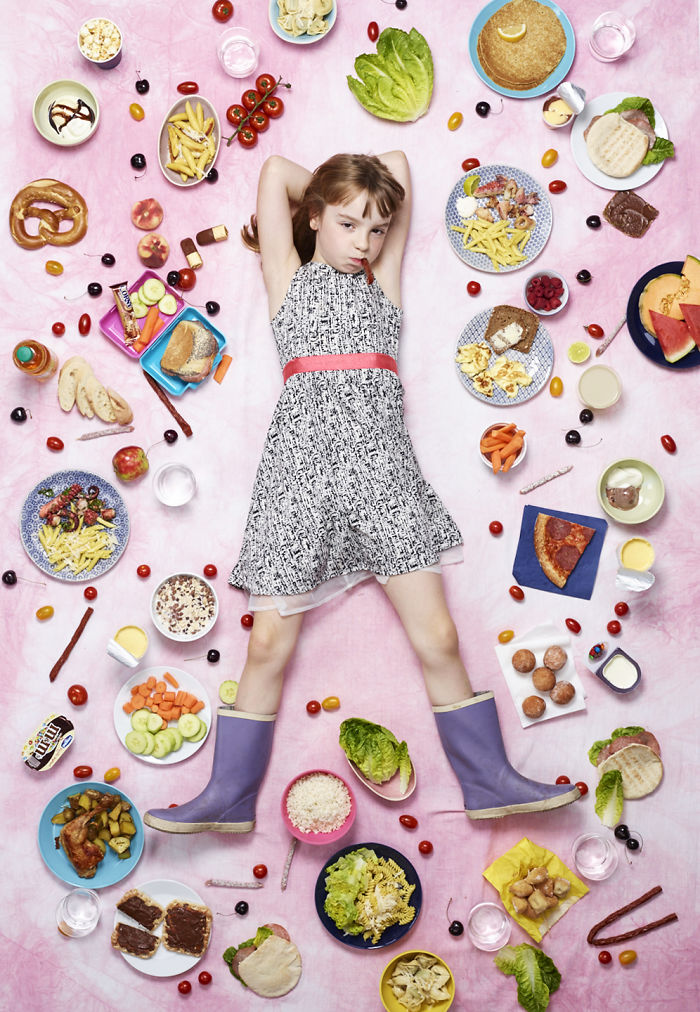 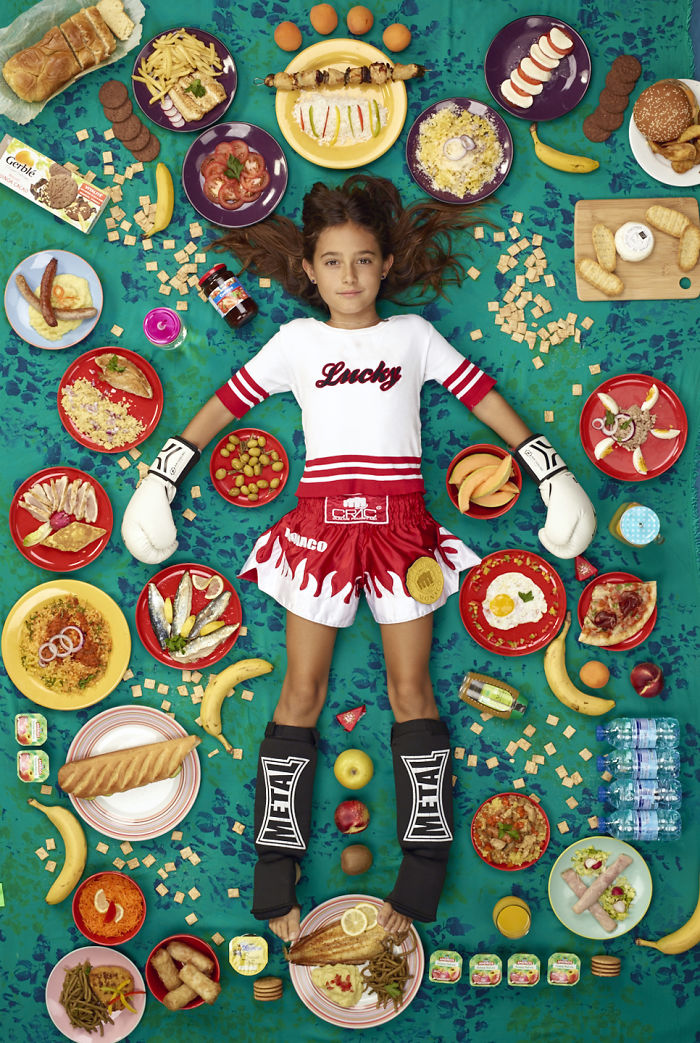 The biggest takeaway Segal has had from this project is how alike worldwide diets are becoming. He thinks it speaks to how homogenized food is becoming, to the detriment of everyone’s health. 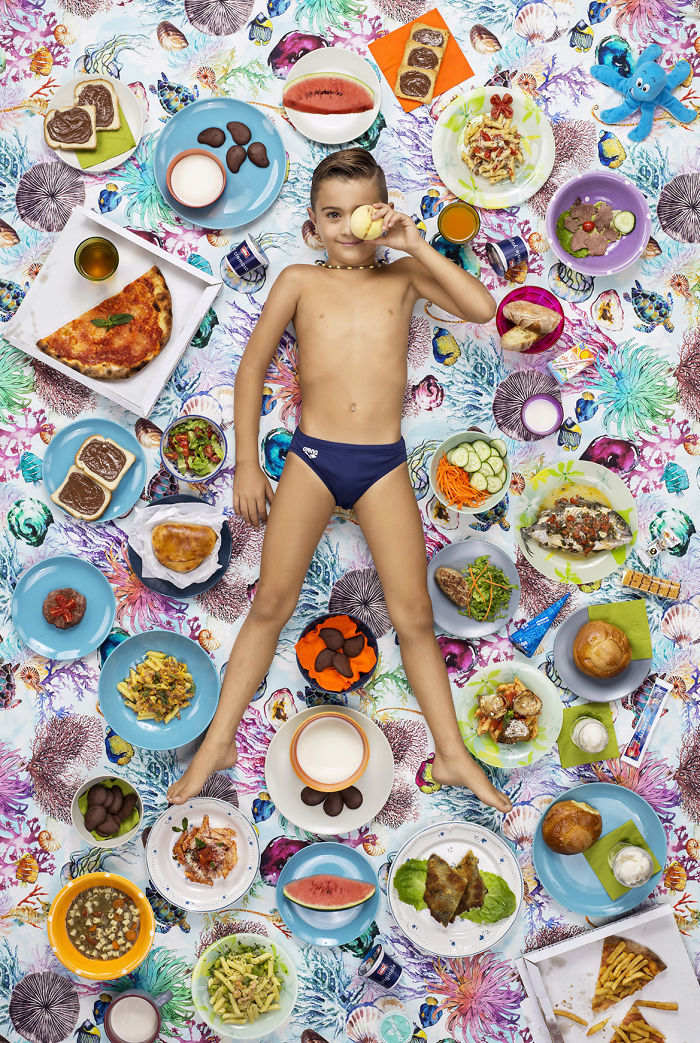 “The revolution in diet and sameness of what kids around the world are eating. Ultraprocessed packaged foods, empty calories. The children I met have distinct personalities and diverse hobbies, yet they’re often eating in eerily similar ways.”

“Compare the diets of Paulo from Sicily and Isaiah from Los Angeles. In the past, a Sicilian boy would have grown up eating very different foods from his counterpart in the US, but now their diets are converging. Both Paulo and Isaiah eat French fries, burgers, pizza, pasta and white bread. They live continents apart, but it’s as if the boys’ parents have been shopping at the same global superstore!”

Definitely food for thought. Follow Segal for more updates on his project, and check out more of his work below. 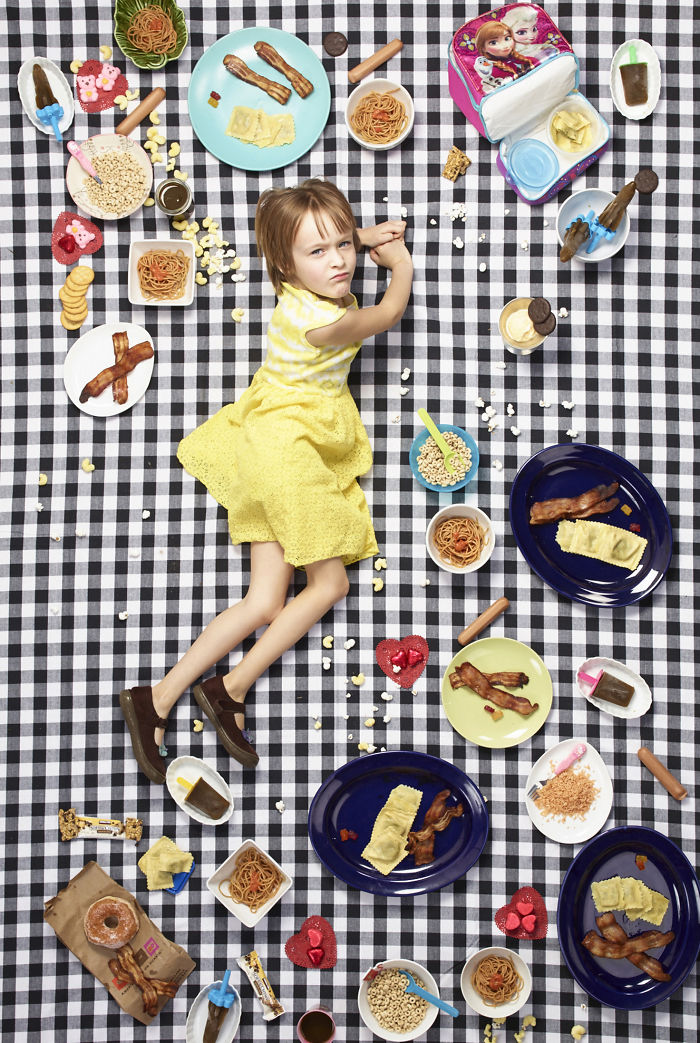 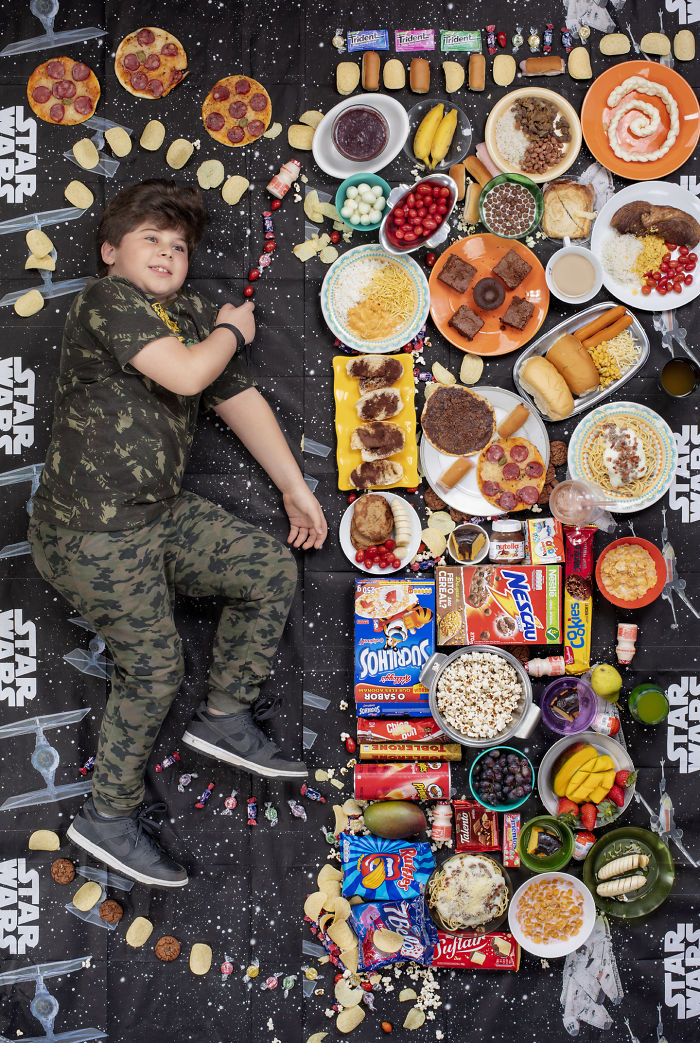 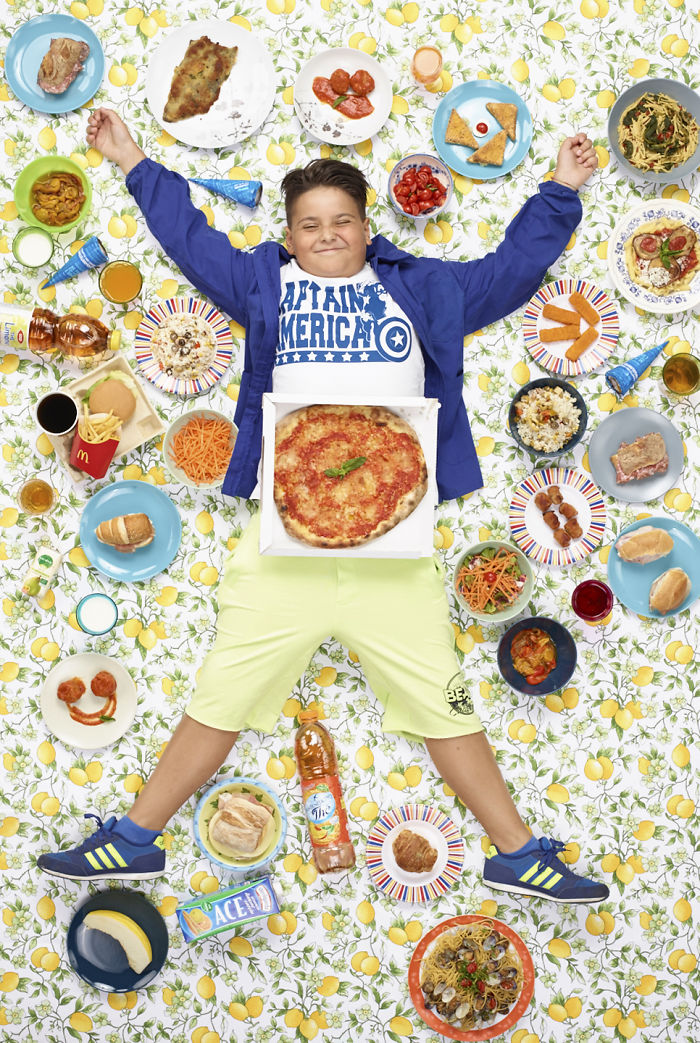 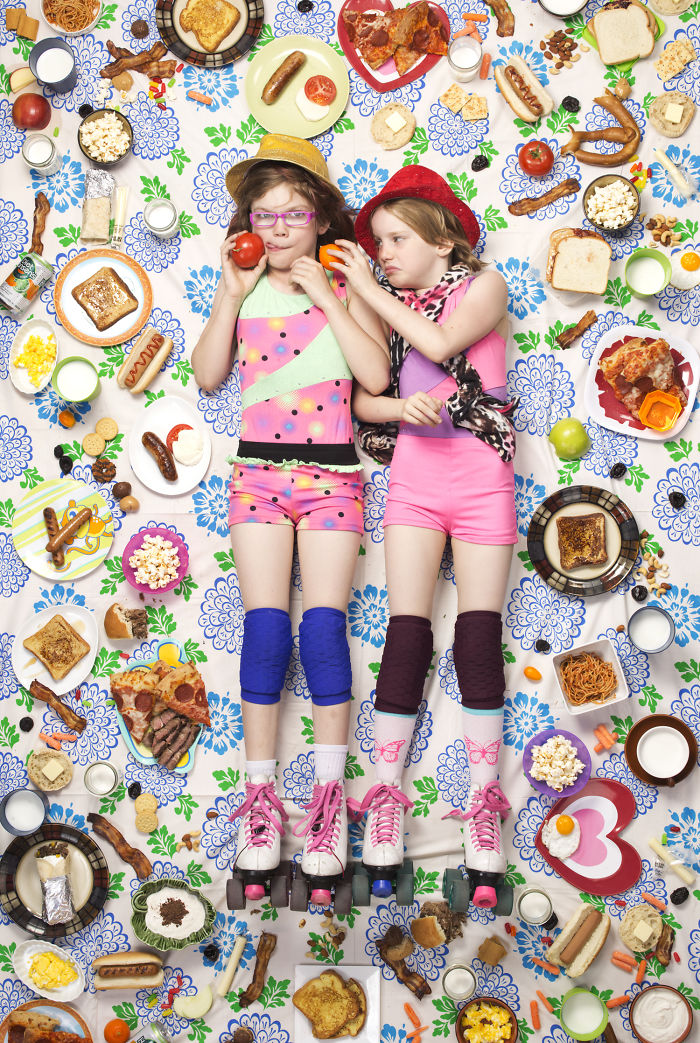 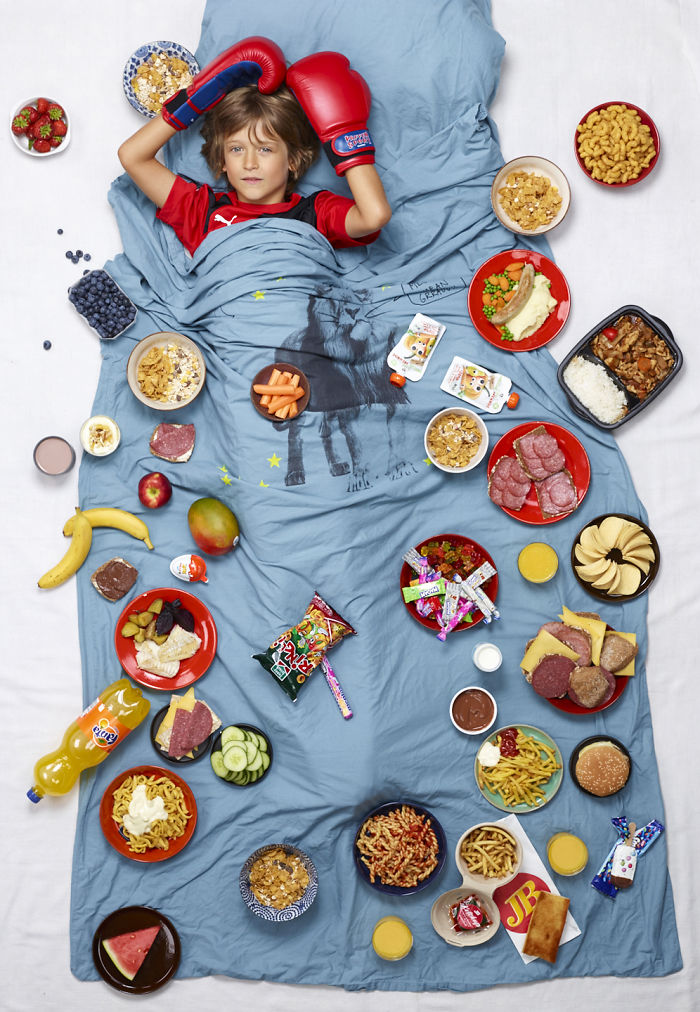 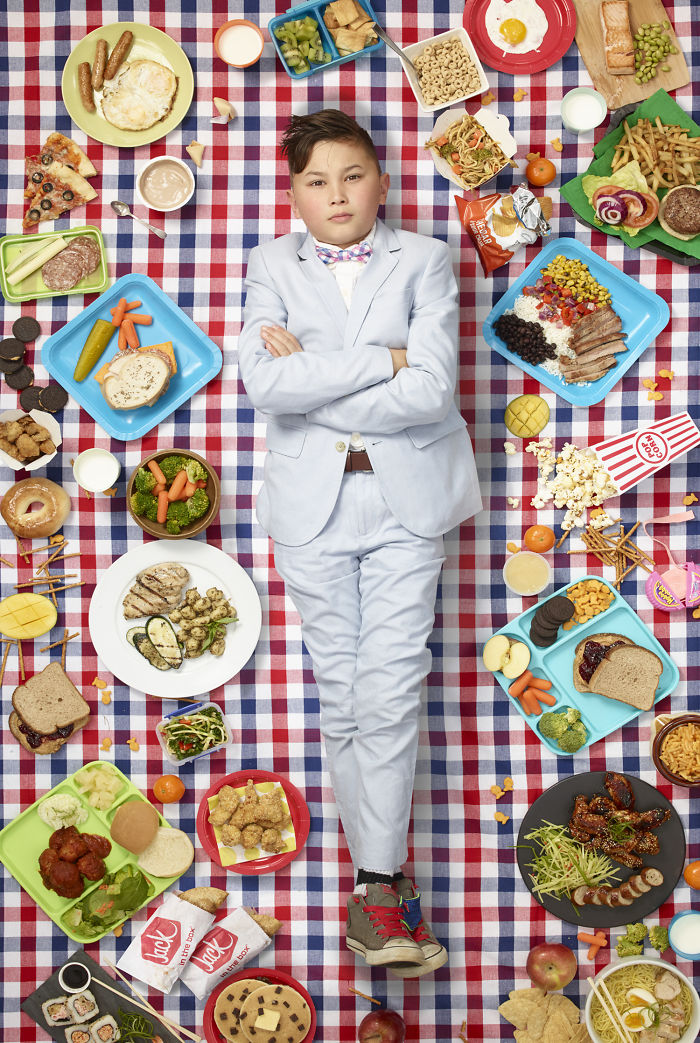 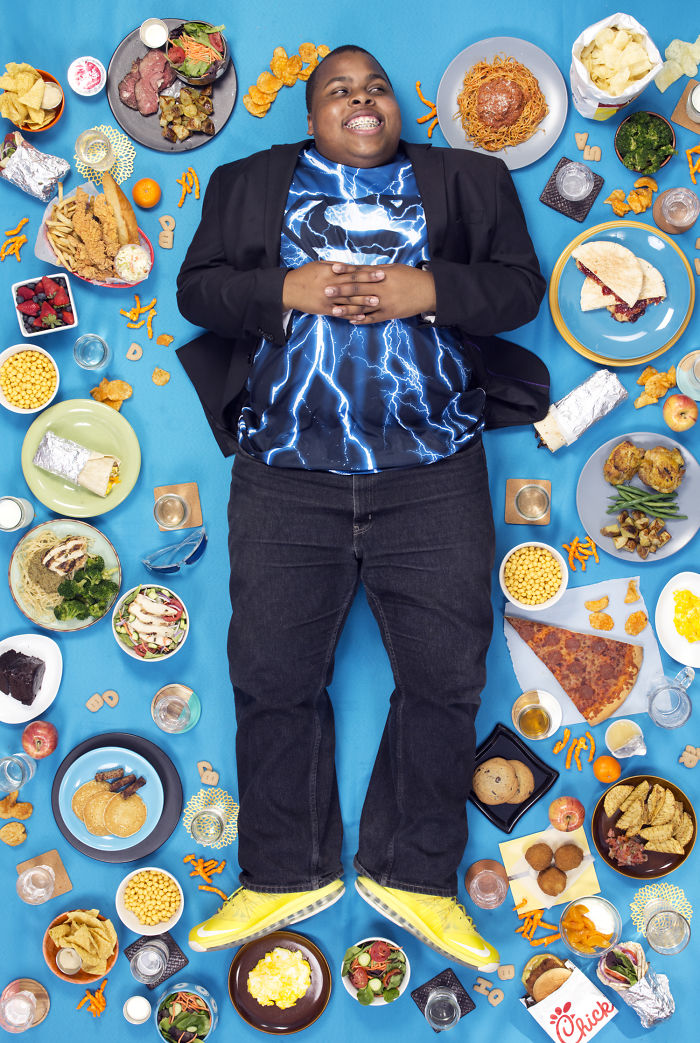 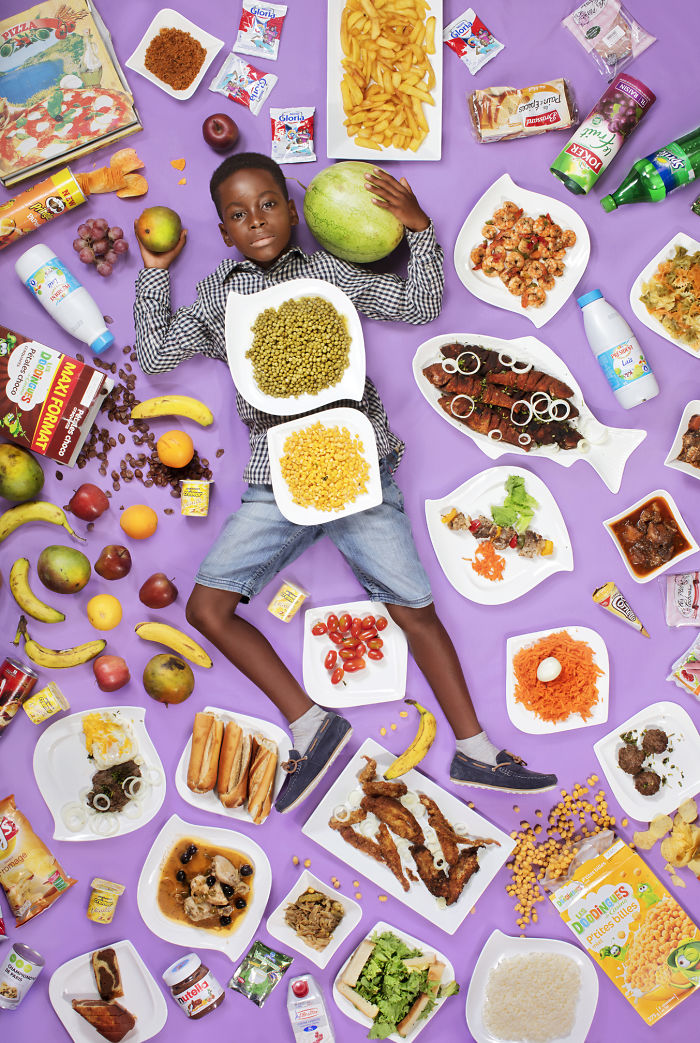 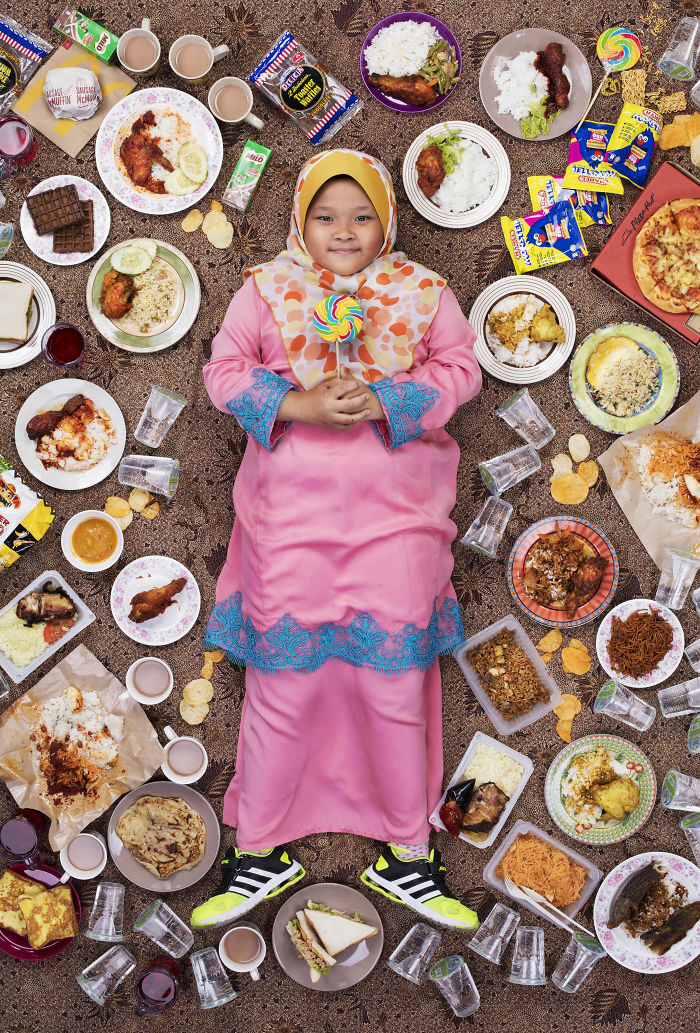 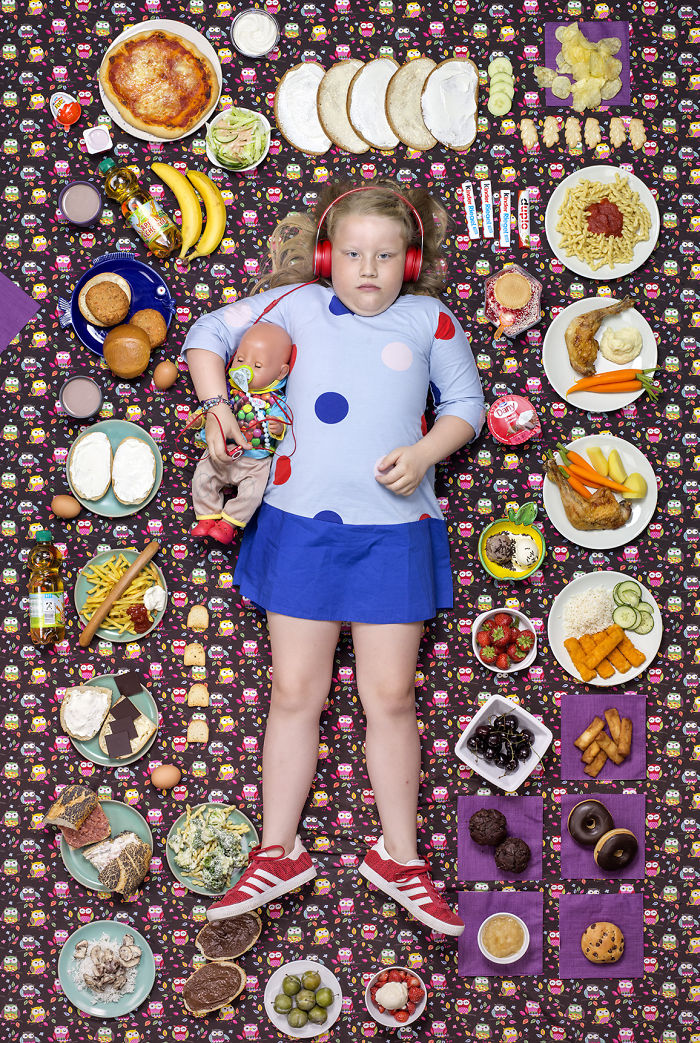 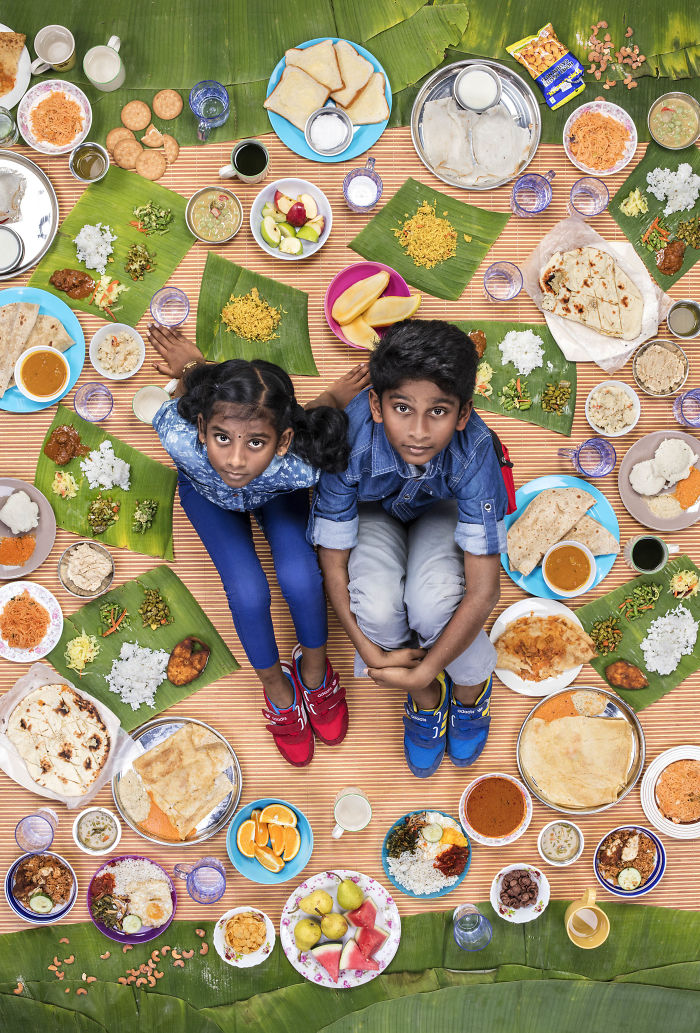 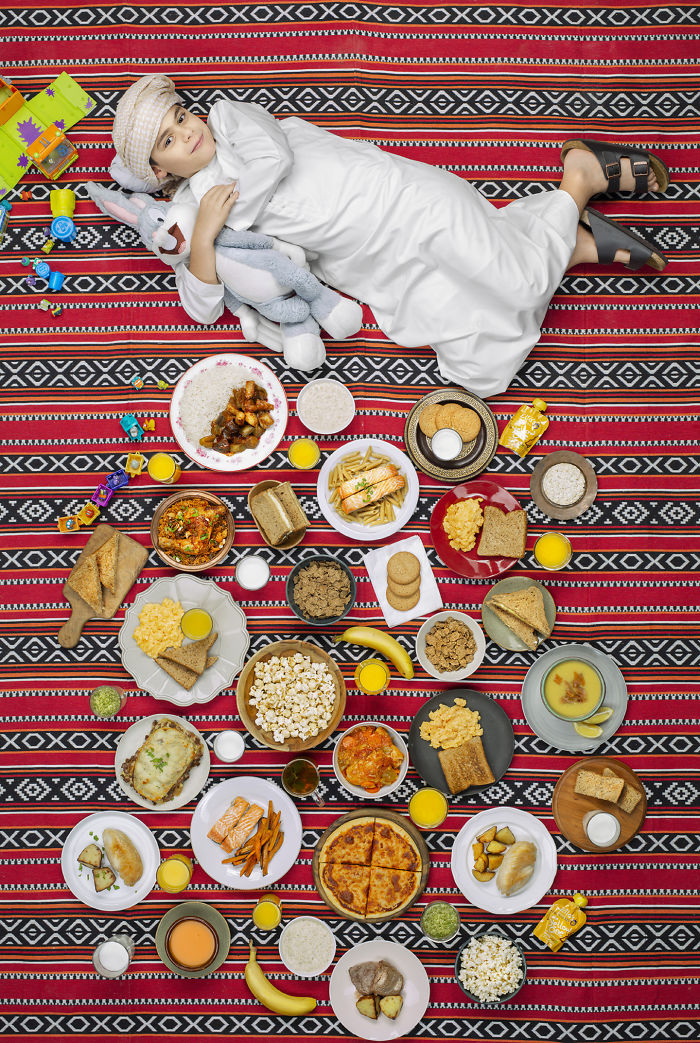