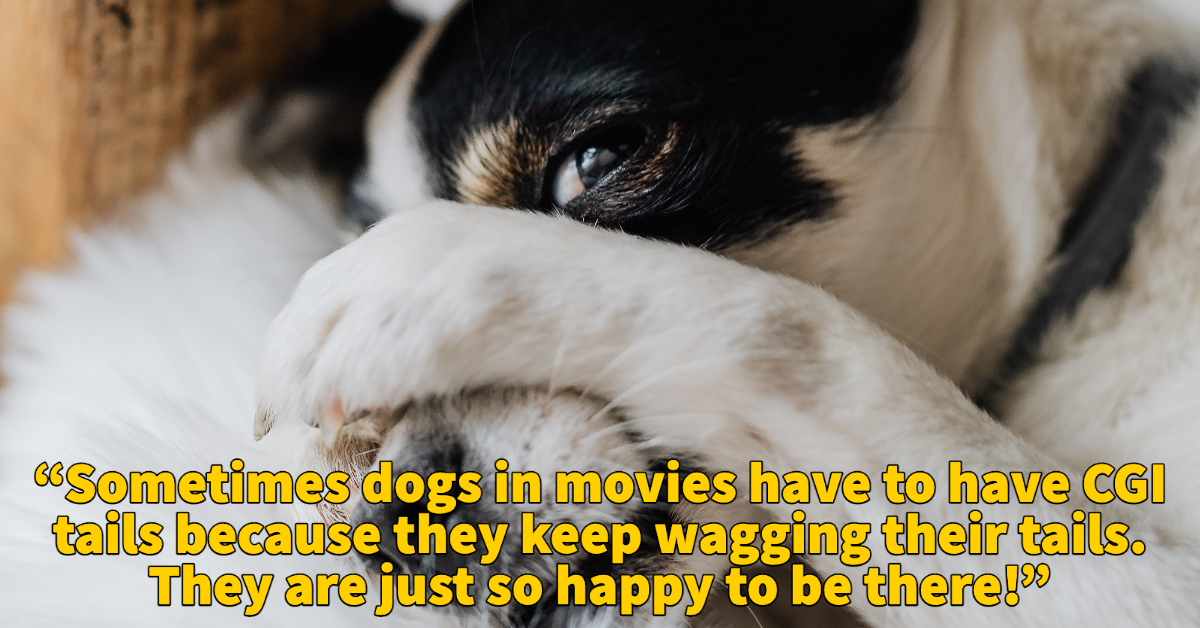 Every day it seems like there’s some new kind of horror in the news. Whether that’s because we have unprecedented access to media or we’re truly witnessing the collapse of humanity is unknown. But it sure is hard to go about one’s day or feel stress-free.

So, folks on Reddit came up with a list of comforting facts to share. Even if it’s just for a few minutes, take joy in the fact that bikers help children cope with abuse, that crows bring you gifts if they like you, and that dogs enjoy being in movies so much that their constantly wagging tails sometimes have to be CGI’d to look like they are still.

As with all “facts” from Reddit, these haven’t been independently verified, so take them with a grain of salt.

1. You Will Probably Be Fine Under Anesthesia

“Nurse here. If you’re having a general anesthetic for a routine operation, and worried about dying while under, please be aware there are about 7 different ‘levels’ of stuff we can do to bring you back. So if the thing we normally do doesn’t work, we’ve got plan B, then we’ve got plans C, D, E, F, G& H. (and we rarely need to even go to Plan C, let alone the rest!) It’s ridiculously rare for you to never wake up from a routine op, of course it happens occasionally, but for every case you’ve heard about it happening, there’s THOUSANDS of identical operations where it didn’t. I’ve been qualified 15 years and it’s literally never happened anywhere I’ve worked.” —

“All of the cardigans Mister Rogers wore on camera were knit by his mother.” —

“There is a group of bikers called bikers against child abuse who support child abuse victims in court by looking tough and giving the kids confidence to testify against their abusers it’s actually an international group.” —

“Crows will let other crows know if you’re a good person. Feeding a crow in your backyard can quickly become many crows over time since the rumour spreads. And nearby crows in your area will know you as one they like. They can also be known to be protective of you and even bring you gifts. Sufficed to say, crows are one of the most intelligent creatures on the planet and they are truly underrated.” —

“I once found a ladybug in my room in the middle of winter. I tried to look up if I could feed it somehow, and found countless other people asking the same question. The world is full of people who have compassion enough to feed a lone bug in the winter.” —

“Zebras rest with their heads on each other’s backs so they can literally watch their zebra buddy’s back. Plus it looks like a zebra hug.” —

“Your body is home to its own unique ecosystem, the human gut. Sounds gross, but billions of little creatures living inside you are helping you digest things, dispose of waste, and survive natural toxins in the food you consume. If you ever feel like you’re useless, or that your existence means nothing, that’s not true. You literally mean the world to your gut flora.” —

“When I was growing up my dad got into fish and keeping a tank as a hobby. Fish have personalities. We had a gold molly that was ‘the boss’ of the tank. It tried to protect another fish who had its fins eaten off and sank to the bottom, chasing any of the other fish away that got near it. Later, we found which type of fish was nipping at the fins of the others, so we got a screen and sectioned the 3 we had off. Then the one started attacking the others so we moved it to a small tank we started with and removed the screen. Little f*cker outlived all the other fish in isolated confinement. Guilty of assault, murder, and whatever the equivalent of cannibalism fish have.” —

“The ozone layer is slowly repairing itself.” —

“Swedish blood donors receive a text whenever their blood is used to help someone.” —

“There is a type of mold growing on/around the Elephant’s Foot in Chernobyl. This mold eats radiation, and the radioactivity of the Elephant’s Foot has decreased drastically since the mold started growing there. idk, it’s just comforting to me that the planet can heal no matter how bad the scar we left.” —

“This past year there has been a massive breakthrough on SIDS research. Meaning in the future we may be able to detect SIDS in infants and possibly avoid as many infant deaths.” —

“Your pets will forgive you if you accidentally step on them.” —

“Cheetahs are very shy animals. So some zoos give them support dogs like those for humans. It’s the cutest thing ever. The bigger reason for this is that cheetahs vision likes to hyperfocus. In a crowd like ones at the zoo, they would get anxious looking at each individual and would try to analyze each person, which can be very stressful for them. Dogs are VERY good at reading groups and crowds. They pair a dog with the Cheetah to rely on emotionally. If the dog is calm, the cheetah will trust them that there’s nothing to worry about from those crowds. How zoo prevent the cheetah from killing the dog? They’re typically introduced at a VERY young age and imprint on each other. Cheetah’s are also not naturally driven to kill dogs as prey. A cheetah could kill a dog, but typically a cheetah would never hunt a dog in the wild. If it was in its territory, or if a dog appeared hurt and by itself, a Cheetah might go for an opportunistic kill, but those are special circumstances. The most likely situation you’d see in the wild would be if they were hunting the same prey and they fought over a kill.” —

“There’s a volunteer organization called ‘No One Dies Alone’. You’re at Sacred Hearts medical center, you’re terminal, you need a companion. From someone to talk to, or just someone to hold our hand. They’ll make sure someone will be there for you.” —

“Sometimes dogs in movies have to have CGI tails because they keep wagging their tails. They are just so happy to be there!” —