There are some jobs where the application process is a job in itself. There are multiple rounds of interviews, writing cover letters and tweaking resumes, lots of waiting and hoping, and probably a fair amount of rejection of you’ve been trying to find a job for a while. It’s frustrating.

When job recruiter Claudia Narder posted a screenshot of a response she got to a rejection email, she thought people would be shocked at how rude the rejected potential employee was. Instead, she found a lot of people ended up on the other side of the conflict.

Narder posted a screenshot of her email to the applicant informing them they would get the job, and she captioned it, “While it might seem like a lot of work right now, giving feedback on job applications is extremely important during this time of uncertainty. At least I know I made the correct decision on this one. Happy Monday to me. #recruitment #recruitmentprocess #feedbackmatters.”

The email to the rejected applicant reads, “Thank you for your interest in the Head Chef position at Cubitt House. Unfortunately after careful deliberation, we will not be progressing with your application any further. We have had an excellent response to our advertising activity and we felt that other candidates better suited our current requirements for this role. We thank you for your application and wish you best of luck in your job search.”

And their response? A simple “f*ck you.”

Narder was interviewed by the Daily Mail, and she says that while the rudeness wasn’t itself so unexpected—after all, she gives people bad news a lot— the response to her post was. A lot of people read Narder’s email and said that what she sent that applicant wasn’t feedback. It was a generic rejection that is borderline insulting in the way it told them there were “other candidates better suited” to the role. Sort of like someone going on a date with you and then saying they don’t want a second one, because they’ve met people who are hotter. 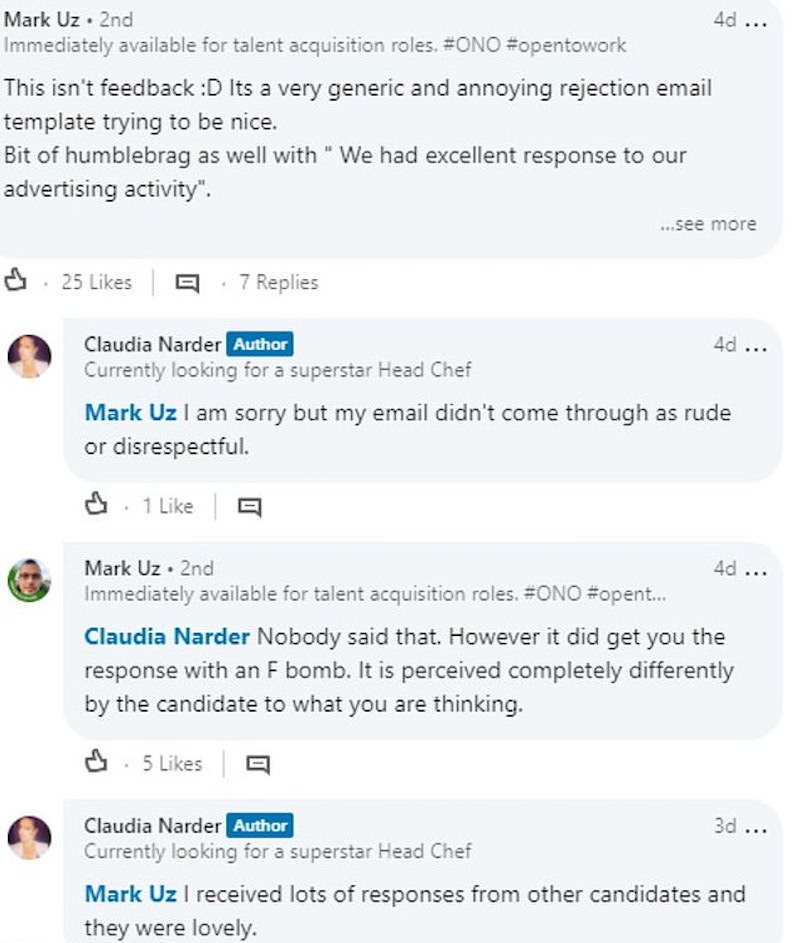 Mark Uz, who apparently works in “talent acquisition roles,” commented, “This isn’t feedback. It’s a very generic and annoying rejection email template trying to be nice. Bit of a humble brag as well with, ‘we had excellent response to our advertising activity.”

Narder isn’t very open to feedback on her feedback. She responded to Uz, “I received lots of responses from other candidates and they were lovely.”

Of course you did. You’re the gatekeeper to the jobs that people need to live and most of them don’t have the lack of caution or anger level to write back something rude or offensive.

Tom Snarkis told her, “Your feedback is literally a template therefore you got a template response. Poor HR Response.” 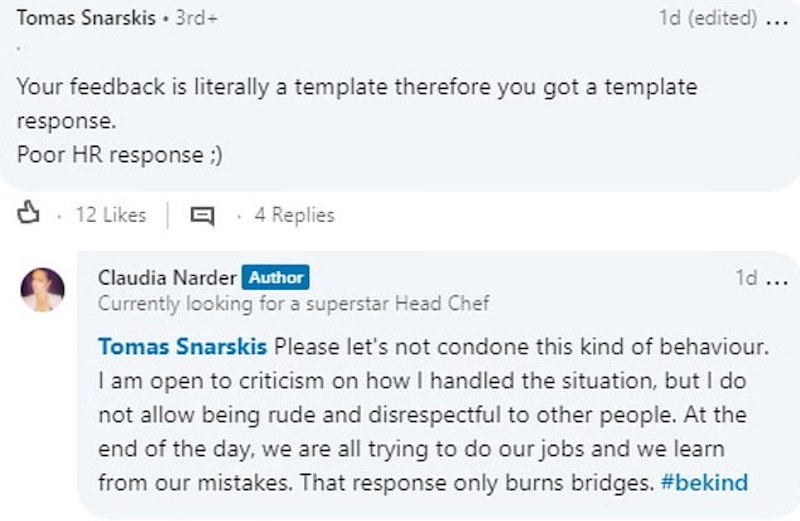 “What shocked me the most was not the candidate’s reply, as we get all sorts of replies, but it was the feedback that came in from people on my post,” Narder told the DM. “They were condoning it and saying it was correct for the candidate to use the F word and using abusive language that you wouldn’t use anywhere else. I understand my response was pretty generic but it was nice and polite. They were comparing it to the response saying, ‘you get what you give’. I’m sorry but I can’t agree with that. That’s not fair.”

Some people were more upbeat about it, joking the f*ck you was an autocorrect slip: 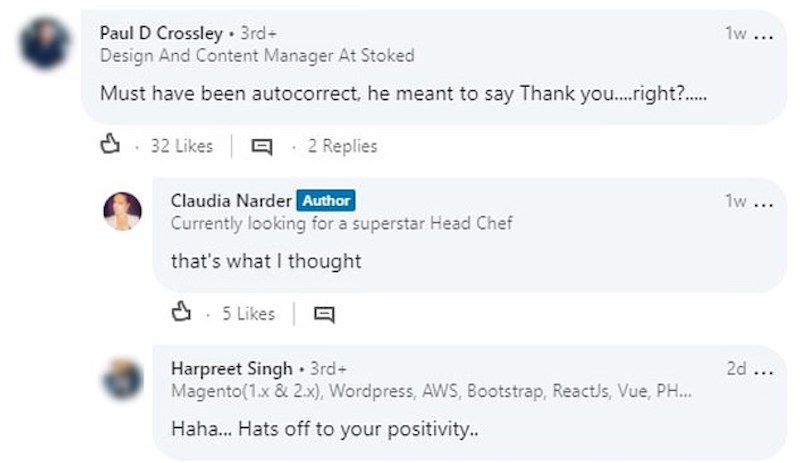 But many more tried to explain to Narder what it’s like to be on the other side of this exhaustive process:

Narder said the whole experience has made her question her ability to do her job: “Am I doing the right thing? Am I good at my job? Maybe it’s something I need to change. I felt quite intimidated, actually. It shows probably there was a miscommunication in the way we communicated with him, so I felt really bad.” 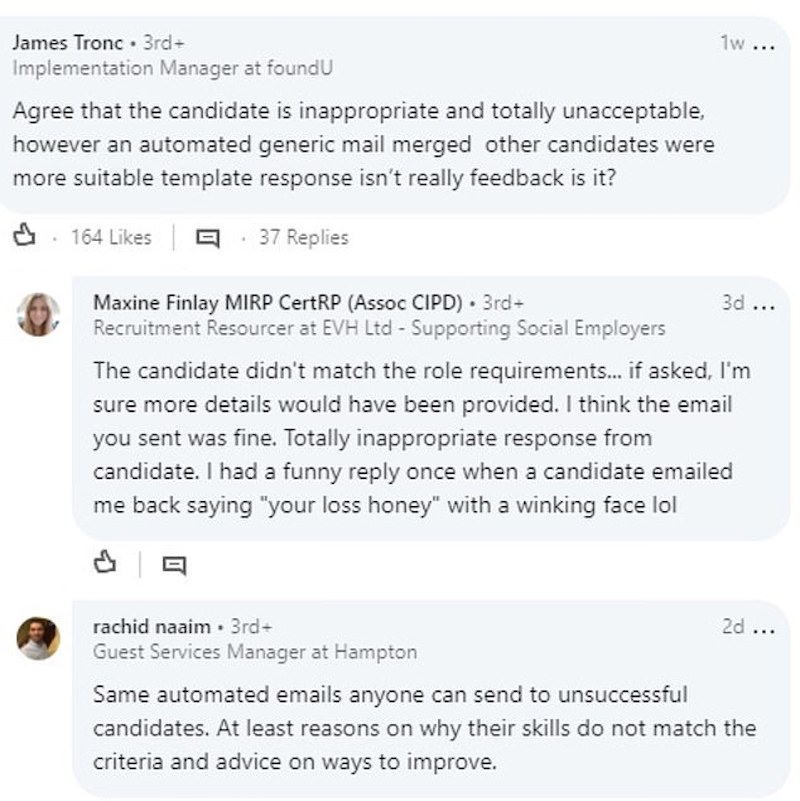 There might not be a perfect way to reject somebody from a job they were hoping for, but if this unpleasant LinkedIn experience makes Narder’s process better, that’s good.

And at the end of the day, she has a job still and whoever wrote that email does not.