In yet another example of “why are men,” the latest Reddit AITA (“Am I the A**hole”) post to go viral has people absolutely flabbergasted. In what was pretty clearly a throwaway account (for reasons that will soon become crystal) user RockSquap asked the question, “AITA for going over my wife and speaking candidly to her boss?”

In the post, he explained that his wife has a “high-level corporate position” at her job, and that the stress had recently begun to take a toll on her mental health.

“She’s visibly upset much of the time, but she doesn’t seem to want to discuss the specifics with me,” he continued. “She’s even become forgetful and somewhat unuseful around the house recently—she seems to always be thinking about work.”

And that is where things took a sharp left turn from a husband being concerned about his wife’s well being to a husband annoyed the housework wasn’t getting done. Friends, it gets worse. 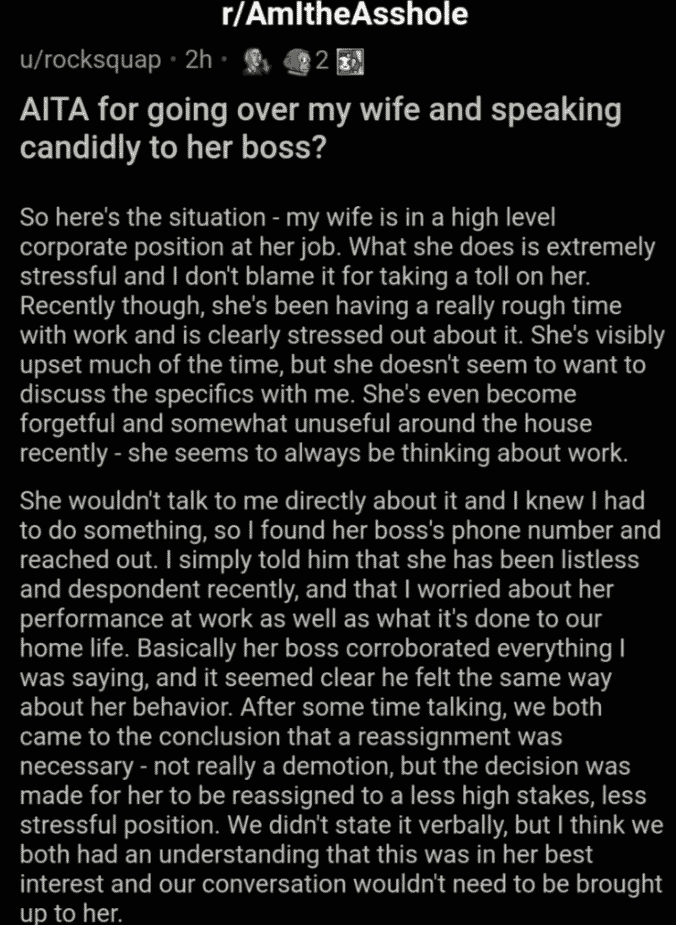 Since he claims his wife wouldn’t talk to him about it, OP says that he simply found her boss’s phone number and took it upon himself to reach out to him. 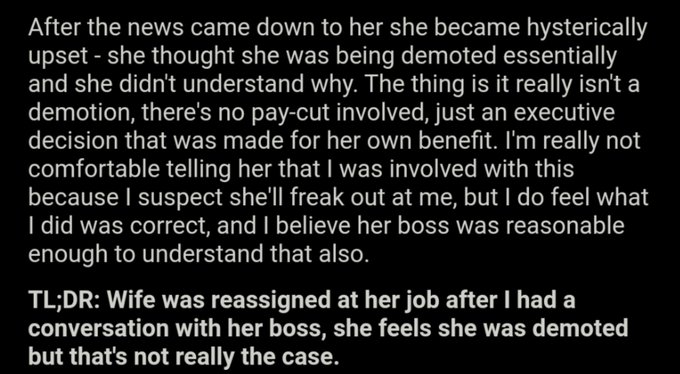 “I simply told him that she has been listless and despondent recently, and that I worried about her performance at work as well as what it’s done to our home life,” he writes. “Basically her boss corroborated everything I was saying, and it seemed clear he felt the same way about her behavior. After some time talking, we both came to the conclusion that reassignment was necessary.”

They decided! How thoughtful of them. However, what OP was perhaps unprepared for was his wife to become “hysterically upset” when her boss essentially demoted her, sans explanation.

“The thing is it really isn’t a demotion, there’s no pay cut involved, just an executive decision that was made for her own benefit,” he concluded. “I’m really not comfortable telling her I was involved with this, I suspect she’ll freak out at me, but I do think what I did was correct, and I believe her boss was reasonable enough to understand that also.”

AITA for going over my wife and speaking candidly to her boss? https://t.co/X2Mu3FcVxH pic.twitter.com/tGzDbSLCaF

As the tweet went viral, others could not fathom the absolute nerve of either the husband or the boss—but mostly the husband—and began basically calling for a divorce on her behalf.

My bf is currently in a similar boat– his job is making him absolutely fucking miserable. But I WOULD NEVER DARE try to intervene in his professional life!! Wtf?? I’m simply doing more around the house to support him– making more meals, doing more cleaning, etc. JUST DO THAT

Oh I’d have beaten him in the parking lot of a Walmart, in full view of everyone.

At first I thought “oh here’s a worried husband, his poor wife”…. Then I got to “unuseful around the house”

So you’re not a concerned husband, worried about your wife’s mental health & difficulties she might be having, it’s more about her not fulfilling her useful duties? YTA!

“My wife is behaving differently, so I went over her head and spoke to her boss, who reassigned her. AITA?”

EXCUSE ME?! You went over her head and talked to her boss about her job which is NONE of your business? YTA and so is the boss for talking to you about it.

There is so much wrong here. The headline was enough but I read it anyway.

If the situation had been reversed the OP would have lost his mind. Absolutely no way was what he did correct or ok.

People get stressed. Sometimes they get distracted. You don’t call your partner’s boss

For what it’s worth, his wife will almost definitely find out eventually because there is almost zero chance this doesn’t make its way around the office rumor mill. And when it does, it sounds like this marriage will be toast. Hate to see it!