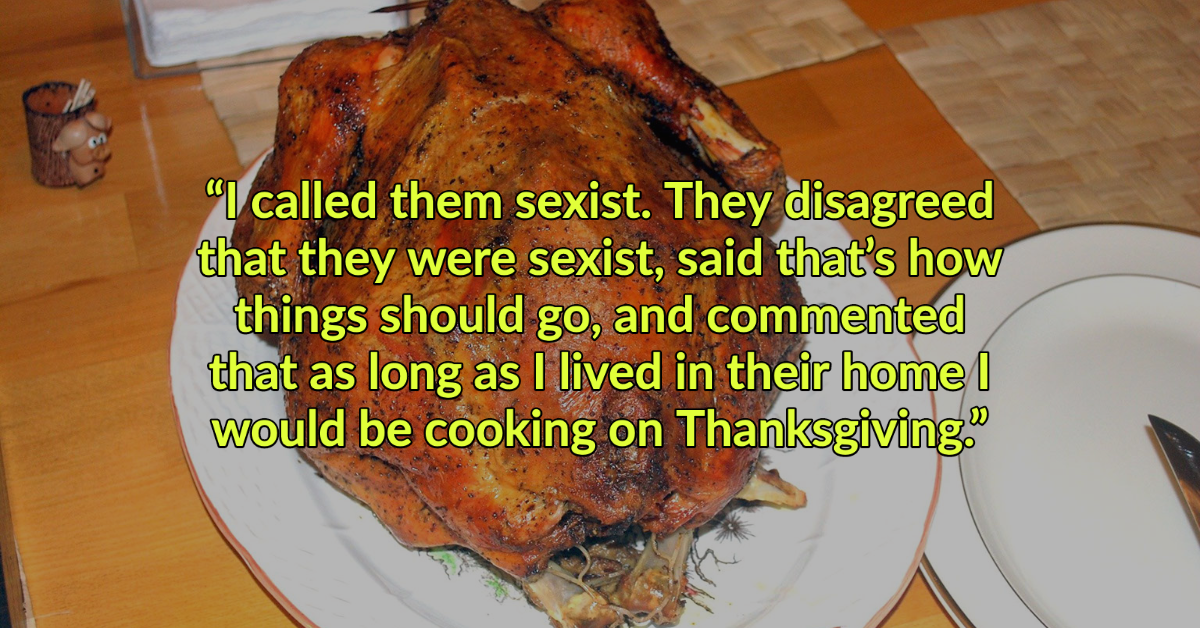 Thanksgiving is cancelled this year. Just deal with it. Cook a turkey and a few sides and pass out in front of the TV. Or order takeout. Do you. Invent new rituals. But, if you are partaking in Thanksgiving with your family, you will be subject to all the same old arguments and probably a bunch of weird ideas about gender roles.

One Redditor who isn’t a fan of Thanksgiving mainly because she’s put to work in the kitchen while her brother gets to lounge around, is trying to figure out if she should stand her ground or potentially ruin the holiday.

“For all of my life, my mother and I have spent all of Thanksgiving day in the kitchen cooking the meal while my father and older brother have sat around, watched tv, napped, etc. This has always been kinda annoying for me,” the OP writes.

“Thanksgiving two years ago was a terrible day because things came to a head. It was my first thanksgiving spent with my now boyfriend, and my mom made me come home early from lunch with his family to help her cook. I made the argument that I wasn’t unwilling to help, but it was unfair that I could only spend an hour and a half or two hours with my boyfriend’s family since I needed to cook, yet my brother had no where to go all day, nothing to do, but was not expected to help out at all.”

“This resulted in a massive argument being as my mother and father told me that it was my role as a female in the house to cook. My brother is responsible for ‘outside work’ (mowing the lawn, taking out the trash) while I am responsible for ‘inside work’ (cooking, cleaning). I called them sexist. They disagreed that they were sexist, said that’s how things should go, and commented that as long as I lived in their home I would be cooking on Thanksgiving.”

What should the OP do?

“Setting boundaries like that once you’re able to is absolutely the way to go and it doesn’t matter how much your parents tell themselves they aren’t sexist. They still are,” said micah_mellon.

“Your parents are sexist jerks. Just keep dreaming of that freedom that is coming soon. I do want to mention this, though. Your thoughts of how Thanksgiving will go once you leave don’t seem realistic to me. My guess is that your parents aren’t going to be on board with you telling them who is to make/bring whatever dish. In addition, I predict you will be told to get in the kitchen as soon as you arrive to help finish cooking. Oh! And don’t’ forget all those dishes afterward. I mean after all, it’s wimmin’s work. Know what I mean? You’ve told them how you feel. They don’t care. Spend some time thinking about this, please,” advised duchessofcheezit.

“You need to suddenly become a very bad cook, clumsy in the kitchen, and prone to daydreams that allows the biscuits to burn,” said GrowlingAtTheWorld.

“My mom AND dad cook for Thanksgiving. They do it together since they’re both awesome cooks and a team. Actually anyone who can cook SOMETHING in our family helps out. And we will still watch the game whole we so this. So yeah, miss me with sexist BS,” said HazelDaydreamer.

I mean, it’s fairly obvious that the OP needs to stand up for herself and reassert that the ridiculous gendered division of labor is something she will not compromise on.