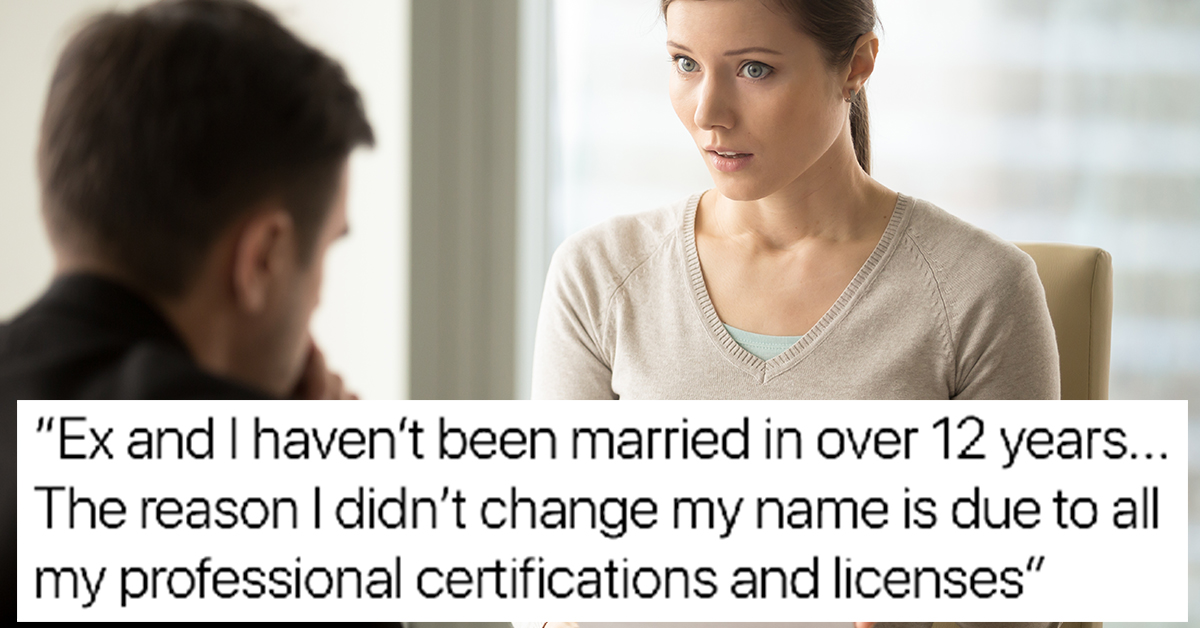 Negotiating how to deal with your ex is really tough, but necessary if you have kids together.  It gets infinitely more challenging when one of you starts dating. This woman posting under the name u/namechangethrowaway0 on Reddit’s r/AmItheA–hole seemed to have figured it out. She says she divorced her ex 12 years ago and they have two kids who they have managed to successfully co-parent up until now.

He even started dating someone five years ago who blended well with their family, treating both the OP and the kids well. Which is why the OP was so taken aback by the texts she received from her ex’s new wife shortly after the two were officially married:

Her: So I think now that me and (ex) are married you should change your name. After all there can be only one Mrs. (exes last name). (Smiley emoji)

Me: Hi (wife’s name). I hope you are both doing well. I’m a little confused as to why I would need to change my name.

Her: Because we are married now and I’m his wife. I should be the only one with his last name.

Me: Ex and I have not been married for over 12 years. The reason I did not change my name is due to all my professional certifications and licenses. Ex and I agreed when we got divorced that it was too much of a hassle to change everything and I would keep my last name the same to avoid the stress and headache of having to do that.

Her: Well that changes now. You WILL change your name immediately.

The OP says she didn’t respond to this last text and ten minutes later her ex called her and demanded to know why the OP “upset her.” Sounds like she upset herself, to me, but whatever. Things got worse from there:

I sent him screenshots of the texts and my replies and told him that this entire conversation is ridiculous and immature. He told me that maybe I should just change my name so he doesn’t have to deal with the drama. I told him I refuse. I said that again we agreed during the divorce I wouldn’t change my name, and even if I wanted to, most of the state offices and courts are closed where we live and it would be near impossible to do.

I told my ex that we haven’t been married for 12 years, I have zero romantic feelings for him and that the only reason I have maintained a relationship with him is because of our children. I told him that they are our priority and we need to all get along to raise them as good coparents. I told him that changing my name won’t make me any less my kids mother or his ex wife and that unfortunately new wife needs to deal with it. He told me I was making his life difficult and wishes I would reconsider.

The OP wanted to know if she was being unreasonable. The commenters told her HELL NO. This is a pandemic, and complicated, unnecessary legal matters are not a priority. Plus, there are a lot of reasons why a mom would want to have the same last name as her kids: 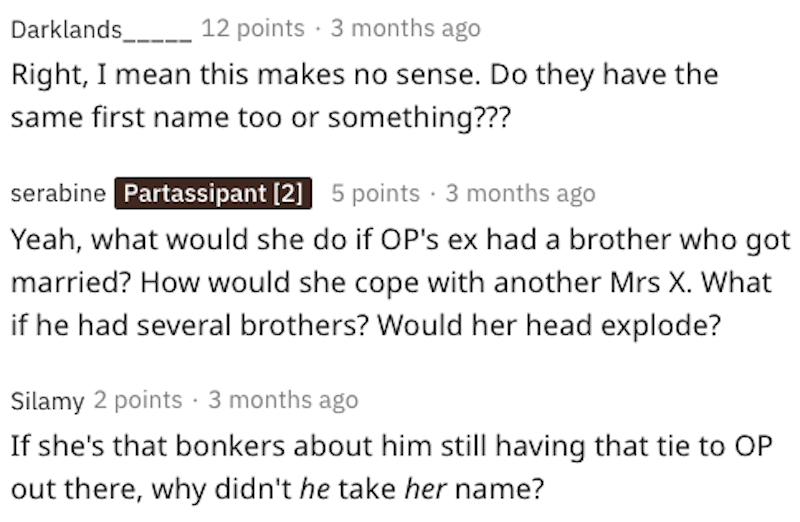 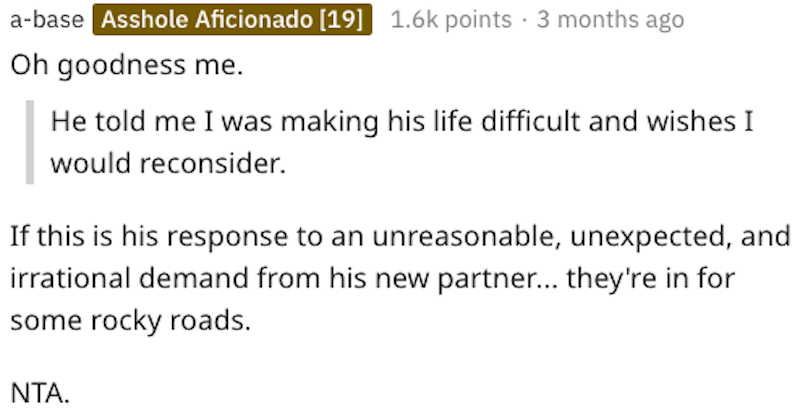 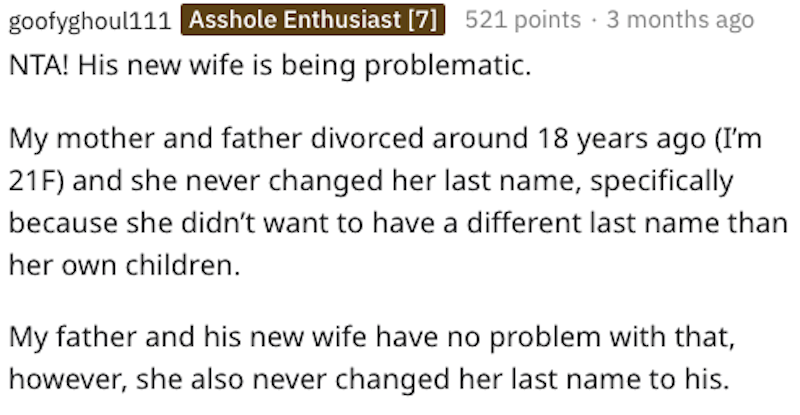 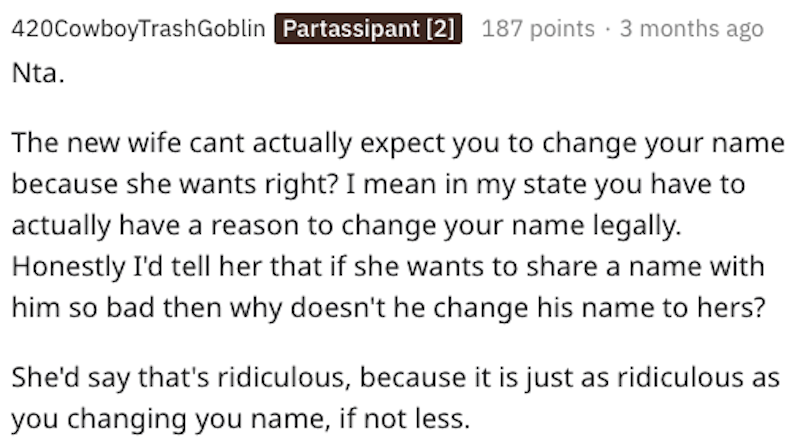 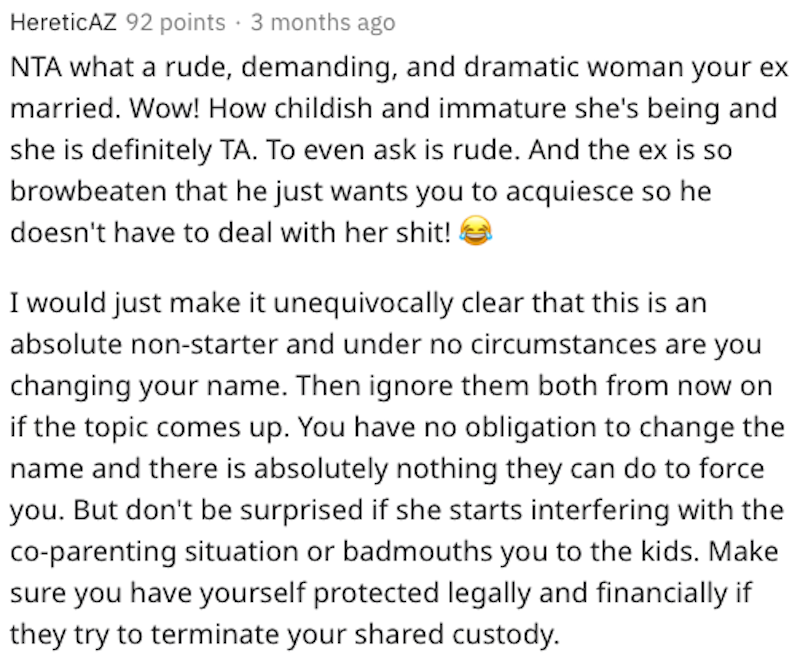 The OP posted a long update thanking everyone for their comments, especially from people who said they’d been through something similar. She added that she even looked into changing her name:

I also looked into the time and cost to do the name change last night. I would have to have a formal court hearing with a judge and have a signed and sealed decree to change it at DMV and social security. The courts here are closed due to obvious reasons and are only hearing emergent matters. So my name change would be delayed. Not to mention the cost of this will be in the thousands and that includes the reprinting of all my degrees and certifications, new office letterheads, business cards, updating to the state list for my profession and my malpractice insurance. This will not be an easy process.

She says her plan is to give it a few weeks until everyone has chilled out and then try to talk about it again. She also added her reason for the divorce in the first place:

I was working two jobs and putting myself through school and he felt ignored. So he decided to cheat and I decided to get rid of 250 pounds of dead weight. (Smiley face)

If anything, this is a story about why we shouldn’t change our names when we get married in the first place.