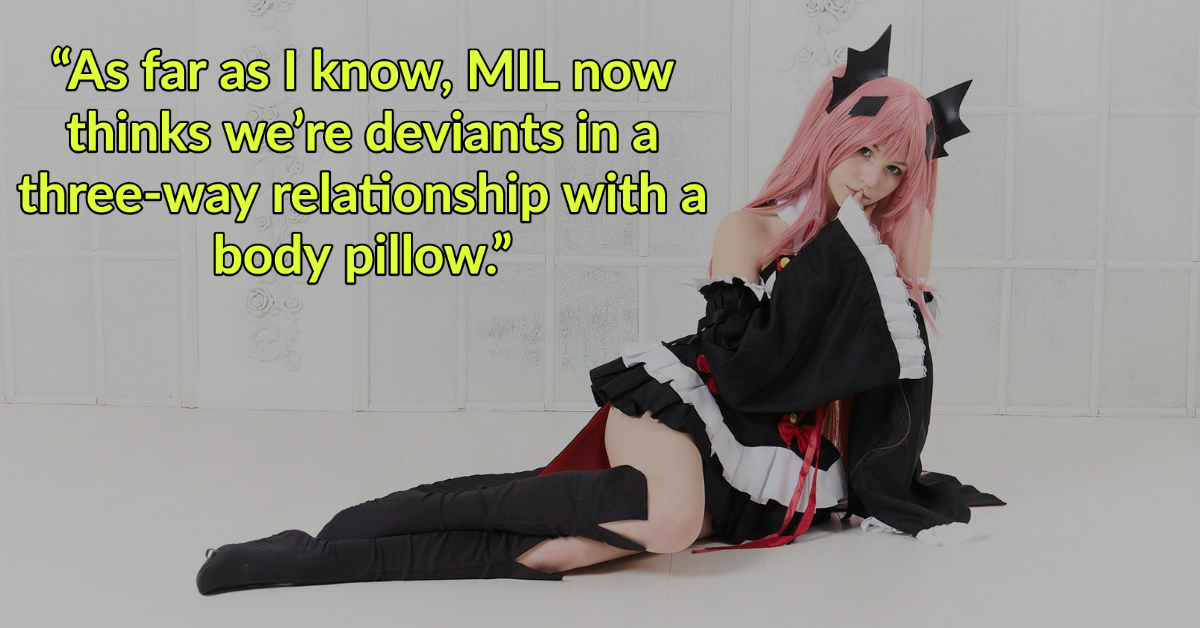 Even if you are in a solid, loving relationship, problems can come up. Sometimes, those problems are pretty basic and easily solvable. For example, sleeping issues. Does one partner snore? Kick in her sleep? Doom-scroll into the early hours? Steal the blanket?

According to one Redditor, her husband and she have totally incompatible sleeping styles—and the only thing that can help save their sleep is the presence of a body pillow between them. However, the kind of body pillow the OP likes is causing some stress for her husband.

“My husband and I are best friends during the day. Love of my life. It’s at night that’s an issue. I’m a blanket stealer. I once yanked them so hard poor Hubby flipped a full 180. Hubby, for his part, is a thrasher. Bruce Lee would be jealous of the moves he pulls off while unconscious. It’s a constant war between us when we fall asleep, and both of us often wake up sore and exhausted. It was starting to affect our relationship. Neither of us wanted to move to a separate bed because we like spending our nights together, but it seemed like an inevitability. We were both crabby every morning, and we started fighting as soon as we got up. It sucked, but neither of us wanted to concede defeat and move to the other bed,” the OP writes.

The OP also adds that as a teenager, she was a “huge nerd” and “full-on otaku.” She has some of her old anime stuff in the attic, and as a joke, she brought it down to put in between her husband and herself, “declaring it our demilitarized zone.” “Hubby also thought it was hilarious, and we named her DMZ-chan. She stayed there the whole night.” She even said the pillow “saved her marriage.”

“It was a game changer. DMZ-chan protected me from Hubby’s REM-induced rampages, and she’s just heavy enough that I can’t yank the blankets at full speed. DMZ-chan is now a beloved part of our nightly routine. We both thought it was the funniest thing, but she legitimately helped us solve the only real issue in our marriage.”

One day, the OP writes, her MIL stopped by to pick up something—and saw the DMZ-chan in the middle of the bed. She left quickly. Later, she mentioned the pillow buddy to the OP’s husband while they were on the phone, and he was embarrassed: “As far as I know, MIL now thinks we’re deviants in a three-way relationship with a body pillow. Hubby was too embarrassed to explain, and now he wants to put DMZ-chan back in the attic,” the OP said.

“I was upset. I told him I didn’t want to go back to boxing each other at night, and that DMZ-chan helped us so much in that. He agreed, but suggested we get a normal, plain body pillow case to replace her. I felt like there was no need to spend money on something we already have, and if it really was that big of an issue, we can put her in the closet while we have company over. Hubby is firm in that she has to go permanently. I know he’s embarrassed, but I feel we shouldn’t have to compromise our inside jokes to appease other people.”

While this is a pretty funny story, what should the OP do? Get rid of the pillow? Or have a serious talk with her husband?

“The real problem isn’t about removing the pillow, but the fact that your MIL made a scene about something that isn’t any of her business. Your husband should stop enabling that,” said hajitaha.

“Well, ok, actually MIL is absolutely the AH because it’s none of her freaking business what goes on in your bedroom and she should have kept her mouth closed. You are not at all in the wrong for not wanting to make changes to your bedroom (or any other part of your home/life) in response to her unsolicited opinion. HOWEVER, I can see how, from your husband’s perspective, it has now changed from being a funny inside joke to a reminder of a super cringy, embarrassing moment with his mom. I honestly probably wouldn’t want that reminder in my bed either. So to me, it’s not necessarily that his wanting to get rid of it is “kow-towing” to MIL as for his own comfort. Judging from just the amount of info provided, it feels like a good, open, honest conversation is in order. On your part, OP, if the inside joke isn’t funny to your partner anymore, don’t you think it’s time to move on? Usually when someone is made uncomfortable by a joke, it’s time to put that joke away. It doesn’t really matter why. If that’s not a good enough reason for you, then is it possible you’re not being fully honest with yourself about your reasons? If you used to have stronger feelings about this object, is if possible that those are clouding your judgment, or that you still have them to some extent? I feel so, that’s ok, but you do need to be honest with yourself and your husband about that and have a good talk about what you both need and are comfortable with in your intimate space,” explained ThoreauAweighBcuzDuh.

“YTA just think is this really the hill you want to die on? I don’t think it’s unreasonable to be embarrassed. It’s something he might have been fine with because it’s just the two of you. But now he might be realizing anyone who accidentally walks by might see it. It’s a factor he hasn’t considered and it’s changed his opinion. That happens. He has presented a perfectly reasonable compromise in a new pillow/pillow case. And you have shut him down because you don’t think his feelings are valid. That isn’t okay. On a side note my husband and I have used separate blanks for a while. You can sleep in the same bed but be separate,” suggested exhauta.

“ESH. Your MIL should chill out and realize that even if it was some three way relationship with an anime body pillow, it’s not her business. Your husband needs to grow a backbone and tell her that she’s being ridiculous and to stop poking her nose around. You need to realize that even if you are ‘right,’ it doesn’t matter because this is such an easy compromise. At the end of the day, why does it matter that you cover the pillow? It’s not backing down to MIL, it’s avoiding any other future mixups. If it matters that it’s unique and ‘fun’ for you, what is stopping you from just getting a marker and writing DMZ on a plain white pillowcase? Yeah your husband needs to stand his ground, but at the same time he has concerns about it and is communicating with you in a very healthy and productive way. You are shutting down that productive communication, which could have further reaching implications (if we’re talking about hypotheticals here, like MIL being nosy in the future because of this ‘enabled’ instance),” said Gariet1.

Seems like compromise is key here! What do you think?