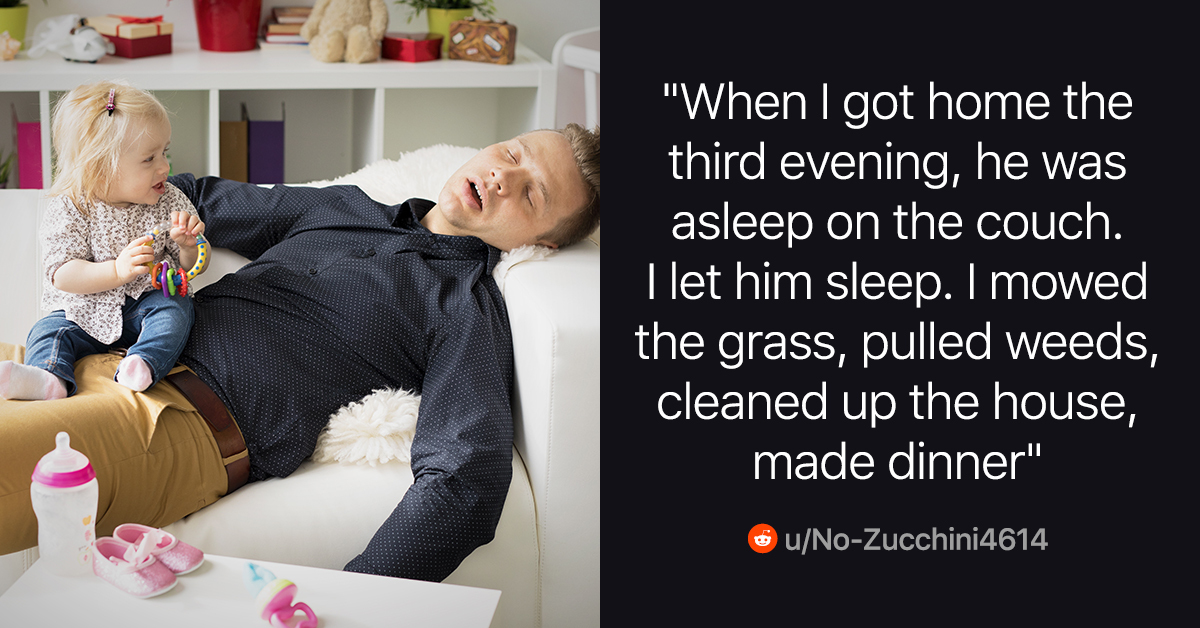 You know what causes tons of fights between couples? The division of labor in a household. Some jobs are harder than others, some are more annoying, and some are often unseen.

One Redditor, who honestly sounds like Wonder Woman, wrote in to AITA explaining that she arranged to work while her husband took off from work in order to show her husband just how much she actually does around the house while homeschooling her child, caring for a baby, and also going to school herself.

Left alone, her husband quickly got overwhelmed and said some nasty things.

“I have a 12 yr old son and a 13 month old. Before the pandemic I worked part-time, went to school part-time and took care of the house/kids when not doing the other two. Since the pandemic I became a stay at home mom still going to school, taking care of the house/kids. But now with school back in session and my son doing E-learning, I also help a lot with that,” the OP writes.

The OP explains that she has a strict schedule to help her manage all of the chores, schooling, and childcare. But one day last week a migraine interfered with her ability to get everything done. So she did what anyone would do—she grabbed the first opportunity she had to rest.

Clearly this mom has a lot going on! In fact, she’s kind of a superhero because this all sounds very difficult. I wonder what her husband does to help out?

“My husband came home while I was sleeping, and was already in a crap mood and yelled at me that I didn’t do anything all day except sleep, eat and get fat. I tried to explain to him I hadn’t been feeling well and napped because of that. He said that was an excuse and how would I like it if I went to work all day and he was home with the children and I came in and he was asleep on the couch. I said, I would assume you were tired or not feeling well.”

The OP’s husband took a few days off work while the OP made arrangements to do temp work with a friend. She left her husband her schedule as a guide.

“The first day he called me 20 times because he couldn’t handle my son’s school work, couldn’t handle taking care of the baby, couldn’t even go to the bathroom without one of them needing something. The second day, he called me 10 times with the same complaints. Both days he was asleep on the couch because he was exhausted from trying to keep up with the kids and house work. I went to work the third day, he showed up with boy the kids and dropped them off without saying anything to me or my friend,” the OP said.

“When I got home the third evening, he was asleep on the couch. I let him sleep. I mowed the grass, pulled weeds, cleaned up the house, made dinner (I tried to wake him for dinner, he refused to wake up) got the kids bathed and ready for bed before he woke up.”

The OP’s husband got mad and said that the OP went to work for those few days to make him look like a crappy parent.

The OP said, no, “I did it to teach you a lesson, that just because you don’t see me actively doing something when you come home doesn’t mean I haven’t done anything all day. This all started because you refused to let me tell you I had a migraine and was just barely able to function that day.”

Is the OP a jerk for wanting her husband to see all the hard work she puts in every day that he fails to notice? I think we can unanimously agree that she is not.

“I got to ‘get fat’ and didn’t need to read any more. Time to lose 200 lbs of shitty husband,” said bettermakethatdecaf.

“You didn’t do it to make him look like a shit parent. He’s chosen to be a shit parent and husband and you forced him to at least slightly understand that. The question is, what do you do now? Because spending the rest of your life with someone who treats you this way is not the answer,” said lightwoodorchestra.

“You husband needs to learn to appreciate what you do. He’s being manipulative to get out of taking responsibility as a parent, and is putting you down unnecessarily when you already have a huge load when it comes to your kids. To have the audacity to show up to your work because he doesn’t want to deal with the kids anymore is a bundle of red flags on its own,” explained traipse75.

“You’re in an emotionally abusive marriage. He has no right to call you fat. Also, you didn’t do it to make him look like a shit parent, he IS A SHIT PARENT because he COULDN’T DO IT. Get rid of him, be happy. You seem to be more than capable of doing everything yourself anyway. Enjoy the alimony and child support payments his shit face will have to pay,” advised ThrowAwayPregnant111.

“You OP are a saint for putting up with 3 children in your home because I guarantee you that you take care of your husband like your other children. What he said about you resting was uncalled for and abusive. It doesn’t matter how bad of a day he had, there is no reason for him to ever say to you. How would you have felt if he said those same words to your 12 year old? You both have a communication problem and would benefit from learning how to listen to each other, either through therapy or books,” said 16CatsInATrenchcoat.

What should this overworked mother do?