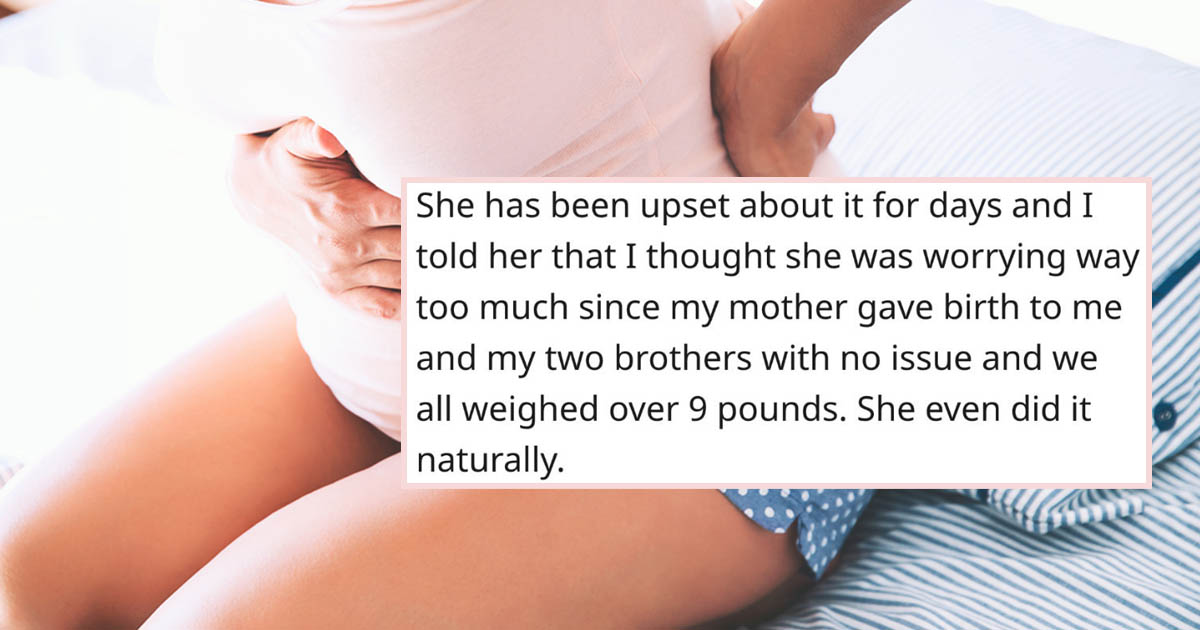 Throughout my pregnancy, my son was consistently measuring pretty large. If he hadn’t come three weeks early, there’s a good chance he could have been at least 9 lbs. I was planning on getting all the drugs anyway, so I was not very worried—and then he decided to come early at a very manageable size. Still, I know some women who gave birth to pretty big babies, and it’s not always a smooth process.

When one man on Reddit tried to comfort his wife by comparing her pregnancy to his mother’s, he was surprised to hear she was not interested in that at all. Did he downplay her concerns about giving birth to a big baby?

“We had an ultrasound last week. Our son measured over 8 pounds even though my wife was only 36 weeks. She was told that our baby could be a 10 pounder and was upset because her doctor advised her to mentally prep for a C-section if he ends up being that big. She is also worried about having to deliver him vaginally if a C-section isn’t required because he will be so large,” the OP writes.

“She has been upset about it for days and I told her that I thought she was worrying way too much since my mother gave birth to me and my two brothers with no issue and we all weighed over 9 pounds. She even did it naturally. That apparently was the wrong thing to say and she had a breakdown. I was told I was unsupportive for telling her that she shouldn’t be worried instead of acknowledging her concerns, which I don’t get.”

OP, you might have been trying to soothe your wife’s anxiety by dismissing her concerns, but when you are 36 weeks pregnant, everything is the worst. You are huge. You are peeing all of the time. You cannot sleep. You are worried about the impending due date and all that could go wrong. There are better ways to calm a pregnant woman than comparing her to your mother. Oh, and by the way, all births are “natural.” Then the OP said, hey, look, the baby is going to grow and there’s not much you can do about it—which is true.

Then he “suggested that she speak to my mom about her experience because I knew that she’d assure her it wasn’t as bad as she was expecting. She said she didn’t want to speak to my mom, but I asked my mom to call her anyway when she was still sulking. She also got upset over this. I was only trying to help her and stop her from worrying, and the best way to do that, I thought, was by pointing out my mom’s experience with big babies.”

Some good intentions here but not too much sensitivity. Also, do not compare your wife’s pregnancy to your mom’s. Just don’t. How can this father-to-be be more supportive during this exciting but stressful time?

“I’ve seen babies get stuck because moms pelvis was too small and that was normal sized baby. She was actually recommended if she has more kids to be induced early so they’re smaller. Plus there are genuine risks of big babies, there can be problems for baby and mom if baby gets stuck because too large (hence the warning about c section),” said future_nurse19.

“Not even just being an asshole to his wife either. His mother was so bad ass that she pushed out 3 9 pound babies naturally… And he’s going to downplay that as something just anyone can do? It’s demeaning to expect all women to experience things the same solely because we are women,” observed SnakesInYerPants.

“Yep. My DD was 10.5 pounds. It was a pretty easy delivery BUT many women opt for C-section because of their INDIVIDUAL ANATOMY. Some women have narrower hips and pelvic cradle. She has every right to be concerned. I most likely she will be fine BUT that doesn’t invalidate her concerns. You are her safe person, OP so step up and be the person she needs you to be. Stop invalidating her feelings,” advised Dropthebanhammer101.

“I couldn’t push out a 6 pounder not without them getting stuck and us both dying, did the whole long labor and had to have a c-sec. Your wife is having a real fear and instead of being supportive and understanding of her very real fears and feelings you pretty much informed her to suck it up because your mom did it. YTA hope you pull your head out of your ass before she goes into labor because she needs someone to actually support her, for fuck sake this is her first time and shit is scary and we still die from birth,” said aClassyRabbit.

“If the Doctor told you that you were going to take a solid 10 pound shit, would you be worried?” asked MJCheeseburger.

“Just because one woman had a certain experience does not mean it will be easy for your wife and it’s certainly not ‘nothing to worry about’. Instead of supporting her and acknowledging her feelings you basically just told her they weren’t valid. Giving birth for the first time is frightening and knowing about potential complications makes it even more so. Then you got your mommy to intervene even though your wife explicitly asked you not to. You have a lot of growing up to do, and fast,” said lightwoodorchestra.

“OP, if you’re still here, I have a suggestion (and sorry for not posting this earlier): hopefully the women on here sharing their stories has told you that your wife has legitimate reasons to be afraid and anxious. I get that you only want to calm her fears, and this was your way to help. Even in a situation where someone’s fears really are unfounded, trying to help by illegitimizing those fears will only ever cause more harm and conflict. Here is what you could say instead: “it’s impossible to know what will happen. But whatever does happen I want you to know that you’ll never be alone. I will be your advocate in the delivery room and will continue to be your advocate afterward. If you do experience some complication, we will work together to figure out how to get the best treatment and I will make sure baby and household are being taken care so you can recover. It’s okay to be scared. If there is anything that I’m saying that’s unhelpful or things that are helpful for me to say, please let me know so I am supporting you in the right way,” suggested FakinItAndMakinIt.

“As a guy married over 20 years, my advice is to recognize that many times your spouse just wants you to listen and offer support. Not advice, and certainly not facts that make her feel like her worries aren’t valid. They’re valid for her. Apologize profusely and do what you can to help her know that you’re there for her,” said dataminer-x.