The “Karen” moniker is really out here ruining relationships. Originally a funny name given to entitled women that most of those entitled women didn’t know about, it’s now become a lightning rod for conflict. There are actual women named Karen protesting against the use of their name or calling it a “slur,” which is obviously ridiculous. There are also women who are literal criminals being called Karens, which is ridiculous for other reasons. This trend has taken on a life of its own and it’s now interfering with the marriage of a Redditor named BroncoBFBC.

His post on r/AmItheA**hole is titled, “AITA for calling my wife a ‘Karen’ as she was making a scene?” He starts off by saying that he and his wife are “VERY opposites. Like VERY,” then explains that she has “narcissistic episodes ” when she doesn’t get her way and “sometimes treat people like sh*t.”

One example he offers is a time they went to Sonic and when the teen girl working behind the counter gave her the wrong drink size, his wife asked the girl, “How hard is your job?!?”

This caused a huge fight because the OP’s first job was at Sonic and he had many memories of being treated terribly by customers. He says he yelled at her, telling her to “chill out” and it started a fight. Eventually, they dropped it, but everything came up again with this new drama:

We have been trying to get our dog’s nails trimmed for sometime now at Petsmart for sometime now & we were finally able to make an appointment cause of The Rona. We get there and they can’t find our names on their list and they are pretty booked up till next week. She then starts to go off on the dog groomer & starts causing a scene saying “How could you lose my appointment? I have been waiting for weeks! I wish we still lived in Boston cause they have more pets marts & competent people working instead of useless people like you!”

I was embarrassed and livid at the same time so I grabbed her arm and said “STOP BEING A KAREN AND GET IN THE CAR NOW! I will handle this” She storms off to the car and I apologize to the staff, told them to call me instead of her & apologized again.

I seriously cannot stand it when people are rude to public servants. I couldn’t keep quiet anymore.

When the OP went outside he found that his wife had ditched him and he had to take a Lyft home. He says he found her there in tears.

“She says that I embarrassed her and made her look like a fool when a partner should always have their partner’s back no matter what,” he writes. “I told her that I disagree on that. She has now been giving me the silent treatment for about 6 hours now. AITA?”

Okay, I’m gonna go out on a limb here and say that the issue is not that you called your wife a Karen. The OP added a few more details in the comments, because a lot of people wanted to know why he even married her if she behaves this way.

“She’s my work in progress,” he wrote. “We have talked about her behavior when we were engaged and I called off the wedding due to her behavior. She acknowledged it & said that we are good for each other cause I keep her grounded. But she sometimes reverts to her narc self at times.”

Plenty of people thought that the OP was not the a**hole in this situation and that he was right to stand up for the people his wife was verbally abusing. But a lot of other people pointed out that the whole relationship has an unhealthy dynamic, and the OP is in the wrong for treating his wife like a child to mold and to a certain extent for lashing out in public even though he knows it’s an ongoing problem: 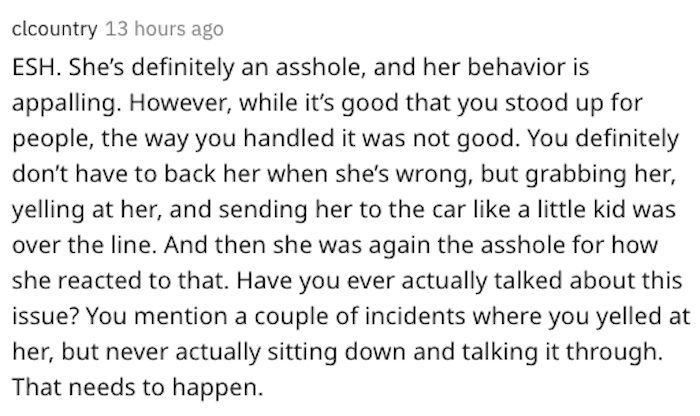 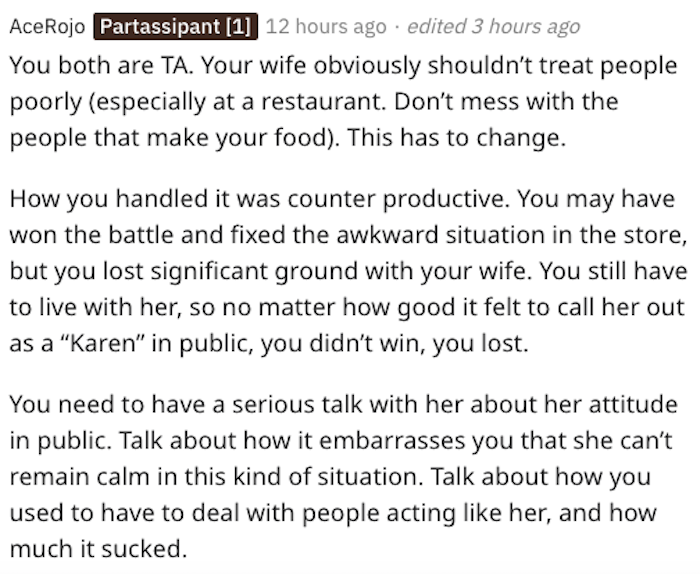 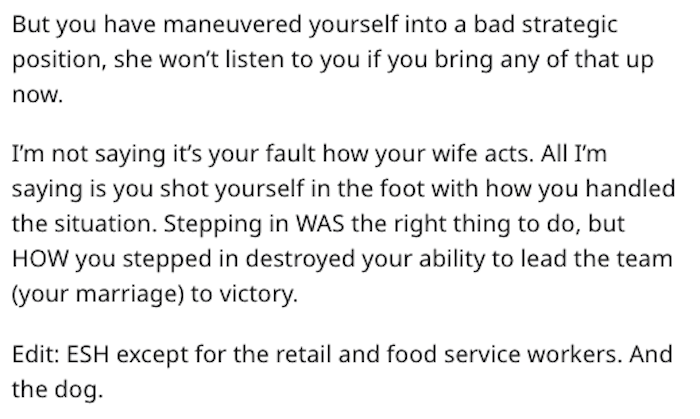 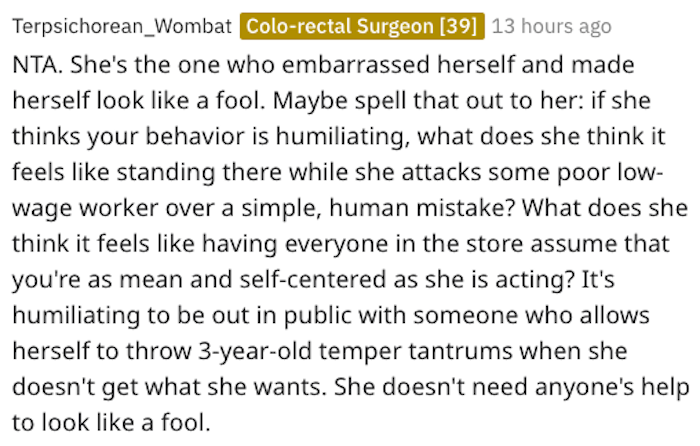 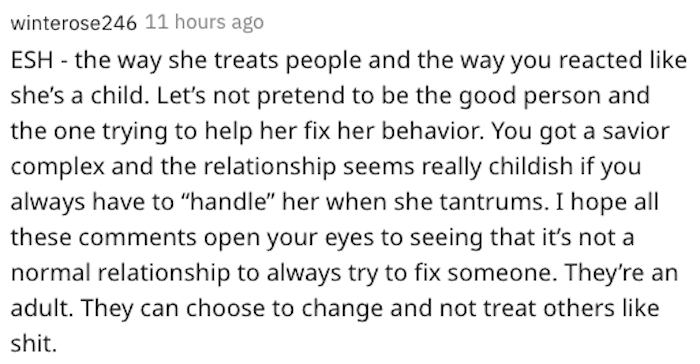 If you feel the impulse to yell at your spouse in public often, that might mean you need to do some serious talking in private. It’s called therapy.