Listen up. This conversation will never end well. If you’re a guy and you assert that men are smarter than women, be prepared to be laughed at, scorned, or given the death stare. If the women in the room are kind, they will tell you to leave. If they are not, they will threaten you. Just collect your sad sack, get out, and search for enlightenment as well as some basic education.

GIVE THIS WOMAN AN AWARD ALREADY pic.twitter.com/hQJfyGsuA1

In a now-deleted Reddit post that achieved viral status on Twitter, one such man made one such assertion to the absolute horror of his girlfriend. Let’s see how that turned out. 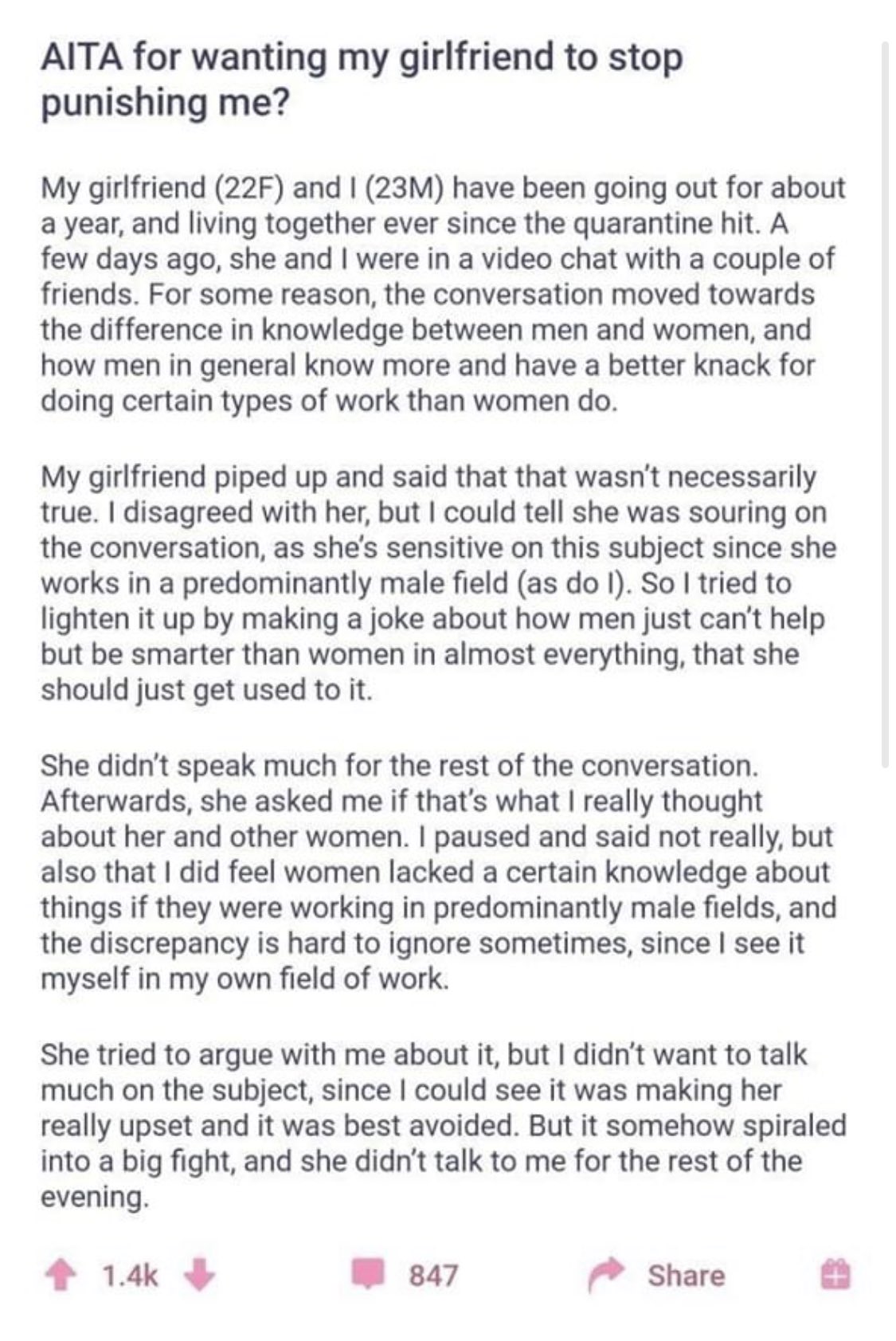 The two were in a video chat with friends when the following conversation began: “For some reason, the conversation moved towards the difference in knowledge between men and women, and how men in general know more and have a better knack for doing certain types of work than women do,” the OP writes.

“My girlfriend piped up and said that wasn’t necessarily true. I disagreed with her, but I could tell she was souring on the conversation, as she sensitive on the subject since she works in a predominantly male field (as do I). So I tried to lighten it up by making a joke about how men just can’t help but be smarter than women in almost anything, that she should just get used to it.”

Yeah, that for sure would lighten the mood for your poor, “sensitive” girlfriend.

“Afterwards, she asked me if that’s what I really thought about her and other women. I paused and said not really, but also that I did feel women lacked a certain knowledge about things if they were working in predominantly male fields, and the discrepancy is hard to ignore sometimes, since I see it myself in  my own field of work.”

Well, his girlfriend decided to not talk to him for the rest of the night. Good call, girl. But it gets even better. 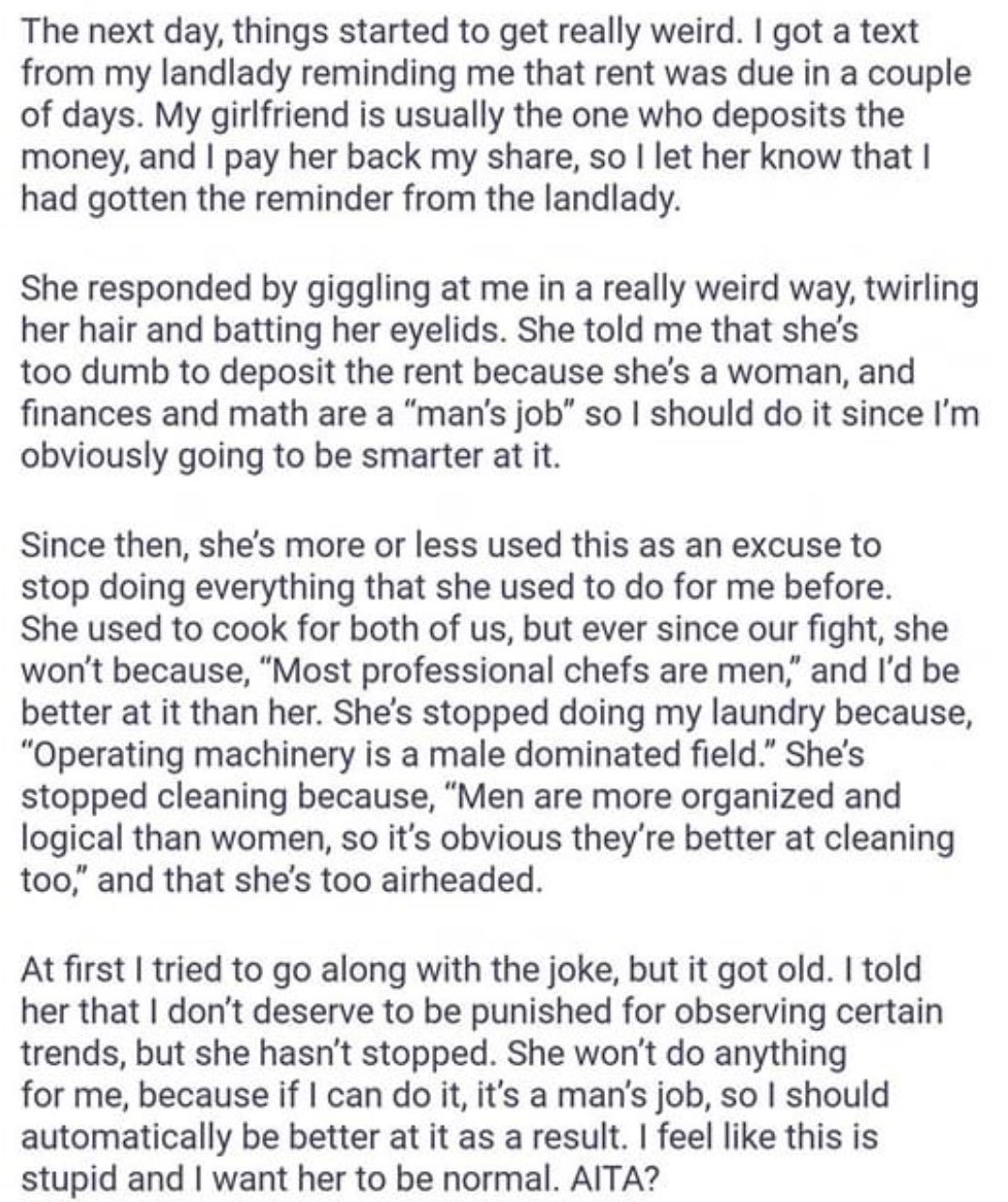 “The next day, things started getting really weird. I got a text from my landlady reminding me that rent was due in a couple of days. My girlfriend is usually the one who deposits the money, and I pay her back my share, so I let her know that I had gotten the reminder from the landlady.”

“She responded by giggling at me in a really weird way, twirling her hair and batting her eyelids. She told me that she’s too dumb to deposit the rent because she’s a woman, and finances and math are a ‘man’s job’ so I should do it since I’m obviously going to be smarter at it.”

Atta girl! Basically, the OP writes, his girlfriend has stopped doing everything. She won’t cook because most professional chefs are men. She won’t do laundry because “operating machinery is a male-dominated field.” She won’t clean because “men are more organized.”

The poor OP is just absolutely frazzled by this expert trolling, but Twitter was delighted to chime in.

Can I suggest her award is “dumping his ass”

“I could tell she was souring in the conversation …so I tried to lighten it up by making a joke about how men just can’t help but be smarter in almost everything” WHAT PART OF THE CONVERSATION WAS SHE SOURING ON IF THAT WAS SUPPOSED TO LIGHTEN THINGS UP???

‘I tried to make a joke about the fact that I don’t see her as an equal, and I’m very disappointed with the service ever since.’

“She tried to argue her point but I didn’t want to hear it so I told her she was upset and shut the conversation down.”

And yet he is still surprised that it ‘spiraled into a big fight’? Give me strength.

“She tried to argue her point but I didn’t want to hear it so I told her she was upset and shut the conversation down.”

And yet he is still surprised that it ‘spiraled into a big fight’? Give me strength.